‘How f—ing useful is that exactly?’ (part of quote from graffiti artist Banksy)

Posted on July 3, 2014 by memoirsofahusk

Banksy wasn’t coy, he used the whole f-word, but I won’t:

‘The key to good graffiti is economy. A simple splash of paint in the right place at the right time is all it takes. An old lady with a pencil can bring down a government by drawing an X on a ballot. And scribbles from a spraycan can convert a slum into an art gallery. But then you would ask yourself “How f—ing useful is that exactly?”‘

I was sent this quote by a man who studies rock art. He has a penchant for graffiti. And pavement art. It’s possibly significant that when he sent me this he was in San Francisco, though he’s actually from South Africa.

He either didn’t see the full version, or edited it, because tracing the source online I found this:

‘An old lady with a pencil can bring down a government by drawing an X on a ballot paper. A single letter H when painted on the floor is powerful enough to attract helicopters. A few licks of white paint transformed the donkey into the zebra. And scribbles from a spraycan …’ etc

So I suspect there was a bit more going on than – possibly – a provocative suggestion that decorative graffiti is useless.

I’ve been seeing some art lately and wondering about usefulness.

Mondrian and his studios. The artist famous for distilling the essence of things into lines and colours. I thought I understood it. A day or two later I realised I didn’t.

I look at his work and like what I see.

But is it useful?

Grayson Perry’s tapestries. ‘The Vanity of Small Differences.’ The man, with his alter-ego, Claire, is almost a work of art himself. I’d visit again and again if I could – though I wouldn’t want to live with them.

They’re a moral tale for our times – for all times.

These brushes with art set me thinking. And right on cue for long thinks, we snatched a few days of anti-social-media time. No email, blogging, Facebook, Twitter – nada. 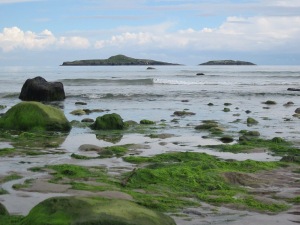 View from Aberdaron beach as the tide ebbs

I like maps. You never know what you’ll find down those wrong turns. And we know how to find Aberdaron.

It’s a seaside settlement, right at the end of north Wales. 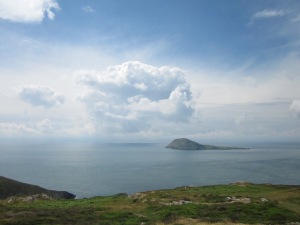 Pilgrims have for years arrived here, en route to Bardsey, isle of 20,000 saints.

A long, sandy beach laps-up the sea. On a good day the oh-so-white clouds and the brilliant blue sky lift your soul straight up to heaven – no need for a perilous pilgrimage, braving the seven currents that gate-keep the island.

In a simple stone chapel on the edge of this Welsh-Wales world, RS Thomas – poet and priest – cared for local souls.

Facing the church are cottages. Old and small. Thick stone walls and tiny windows. It’s a place to keep the sea out, not ask it in for tea.

Years of being a small, hard-pressed community, battling the elements to wrest out a living, have created a cohesion, both visual and human.

But since our last visit things have changed.

A cottage on the hill’s been renovated. Big, blind-looking picture windows gash the front.

The corrugated iron shack that housed the local bakery has gone. A new – thatched – building has taken its place. 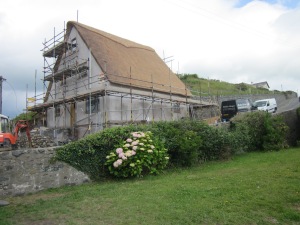 ‘The only thatched bakery in the country,’ says the proud owner.

Indeed. And the only thatched roof in a village of slate. But – the bread’s still good.

And the National Trust has built a Visitor Centre.

Awash with art and poetry, it’s a brave – or foolish – departure from ‘interpretation’ as we know it. 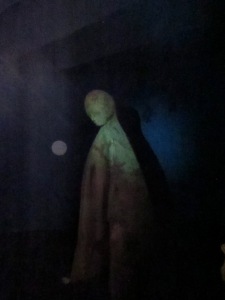 Though there are many words.

None telling anything ‘useful’.

Some ‘artefacts’. Agricultural ephemera. Words painted on each item.

Even the pebbles (in case you can’t make it to the beach?) are worded.

But there’s respite from the words.

In the gift shop.

The windows, the bakery, the Visitor Centre all feel out of place and – for me – have ever-so-slightly spoilt Aberdaron.

Sometimes, though, what makes us uncomfortable makes a point. Grayson Perry’s work, for example, is far from comfortable, but makes me think.

Graffiti on the headland above Bardsey could – arguably – do the same thing. But it doesn’t. It says nothing to me, except, what a lovely view you’ve spoiled. I don’t understand its language, if it has one. 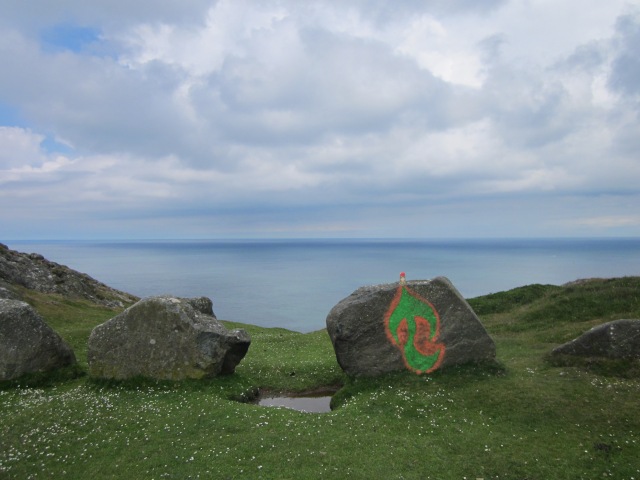 Back in the village, chatting with a local woman, I mentioned the windows. The same person, she says, undermined a whole row of houses by digging out the sand beneath the house for a wet room – or something equally life-improving.

Perhaps uncomfortable aesthetics are a symptom of something more profoundly wrong. Like spots are of chickenpox.

The Centre, the thatch, the windows aren’t going to bring down a government. Let alone a local council unconcerned about its own conservation areas.

But one of them could – will – bring an end to my National Trust membership. That vacuous Centre is just what this tip of Wales doesn’t need. It needs parking spaces. Information for tourists in summer. A space for the community to gather in winter.

I’m told a promised community space has not materialised. But then, this wasn’t for the community was it?

Let’s hope the long journey from London doesn’t put off the target market.

What’s that? An H for the helicopter?

Words by RS Thomas on a calm Aberdaron sea

7 Responses to ‘How f—ing useful is that exactly?’ (part of quote from graffiti artist Banksy)