﻿‘I am half sick of shadows’

Posted on March 8, 2016 by memoirsofahusk

A creation of Tennyson, inspired by Arthurian legend, she sits, day and night, weaving a wondrous tapestry. Although within sight of Camelot, her world is confined to reflections in a mirror. If she stops, looks out onto the real world, a ‘curse is on her’.

And so the Lady sits and weaves, seemingly content. But one day, she sees a pair of young lovers in her looking-glass.  ‘I am half sick of shadows,’ she sighs.

The stage is set for Sir Lancelot – and tragedy – to arrive.

For as long as I can remember, this poem has conjured up two very different images in my mind. One is those ‘fields of barley and of rye, that clothe the wold and meet the sky’. Golden, rippling in a warm summer breeze – my own imagination adding a few scarlet poppies.

The other image is taken straight from a painting of the tragic damsel, ‘All raimented in snowy white,’ by the artist John Wiliam Waterhouse. 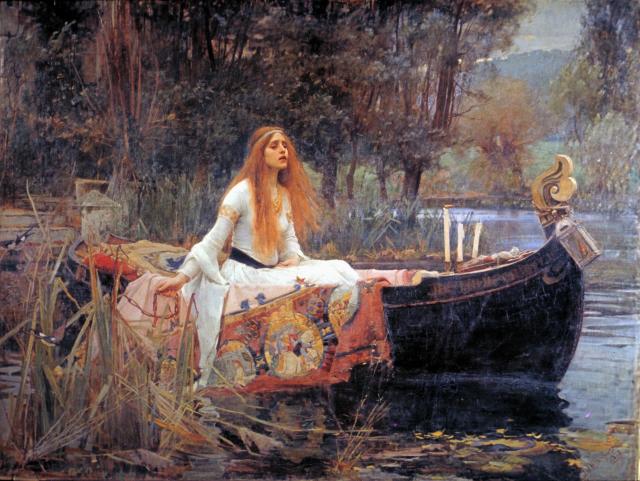 The poster of the painting was one of many that formed a visual backdrop to my years at university.

I was reminded of both the poem and the image by a recent art exhibition at Liverpool’s Walker Art Gallery.

The gallery is one of my favourites, because of its Pre-Raphaelite art. I was therefore expecting great things of its ‘Pre-Raphaelites: Beauty and Rebellion,’ show.

What was I expecting? I suppose I was hoping to be inspired by those romantic, mythical, tragic, religious themes, the bright colours, the flowers, the heroines, for which the Pre-Raphaelite Brotherhood is renowned.

I should, perhaps, have paid more attention to the blurb:

“This exhibition explores different aspects of patronage, art, politics and of the careers of the artists who lived in Liverpool in a way that no exhibition has previously done.”    Christopher Newall, guest curator.

I also should have looked at the catalogue before I started …

I stopped before each work, read each description, gave it fair consideration and – to be honest – felt a little disappointed. There was better, more inspiring, work in the room that we had passed through, gratis, on our way.

But, had I looked at the catalogue, I would have known that I was lavishing my not-feeling-too-terrific attention on just the first, small room. The main room lay ahead.

Here at last, were some serious, stunning beauties. Romance, mythology, religion – and the wonders of nature. The Bible, Dante and Dickens (but no Brontës, were they too shocking?).

The walls were pale as a consumptive’s brow. A classic modern hanging. Words painted onto the walls. Clear, legible and simple. No arty-farty, exclusionary obfuscation.

The fake, three-walled drawing-rooms, built within the main room and hung with smaller pictures, were also pale, wallpapered in a William Morris design.

Mid-nineteenth century Liverpool embraced art in a big way – and especially this shocking new form of art which much of the Victorian establishment reviled.

The role of Liverpool’s successful merchants was key, if not to the success of the artists, then certainly to the feeding, clothing and housing of them over the years. 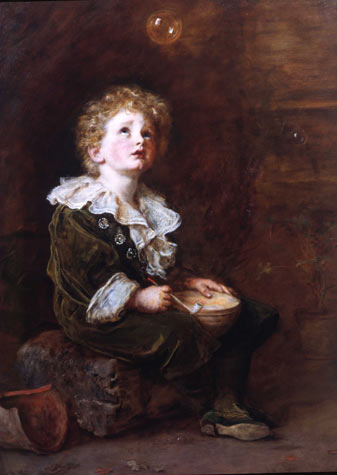 ‘Bubbles’ by Sir John Everett Milias, is in the Lady Lever Galler, Port Sunlight, part of National Museums Liverpool. It was used as a poster for Pears soap.

Businessmen bought and commissioned works to adorn their new mansions – and even, in Lord Lever’s case, to advertise Pear’s soap (Bubbles).

The caption to one image described the artist’s boast that his painting was his finest yet for decorating a room – sadly I can’t remember which artist. But nice and humanly honest, I thought.

So, yes, I learnt a lot. It was worth every penny of the £7 entrance fee. (I overheard a statuesque woman in black telling her phone it was expensive – she needs to reassess her sense of values, frankly.)

It didn’t inspire me. But though I left feeling slightly disappointed, I know I can return, any time, and visit the Walker’s other rooms.

The rooms where, for me, the gallery’s Pre-Raphaelite art belongs.

Some of the paintings are on an epic scale. Huge, in ornate gilded frames, or mahogany, or oak. Some with verses inscribed around or below. Many with themes that tell stories, that spark the imagination.

They aren’t to everyone’s taste, but they are to mine.

And I think back to my university days, to posters of Millais, Mucha, Beardsley – and I wonder why they were so popular, then. When we feared the bomb and sat-in to protest and gawped at the prices as inflation galloped, stealing away our grant money.

I don’t want to stretch a point too far, but today, as I write, it is International Women’s Day. 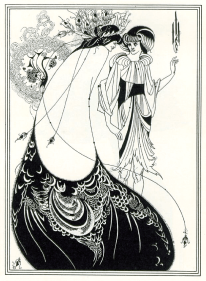 Back then, many of us adorned our walls with Victorian and Edwardian images of women,  among them two tragic heroines, Ophelia and the Lady of Shalott.

And I wonder, just wonder, if maybe it was because we were on a generational cusp.

Too late to be hippies, not yet ready to be a ‘me’ generation.

Almost free, but still feeling constrained by our destiny, our upbringings, our mores.

Or maybe we just liked old-fashioned, romantic tales of doomed but lovely heroines.

Her clothes spread wide,
And, mermaid-like, awhile they bore her up;
Which time she chanted snatches of old tunes,
As one incapable of her own distress,
Or, like a creature native and indued
Unto that element; but long it could not be
Till that her garments, heavy with their drink
Pulled the poor wretch from her melodious lay
To muddy death 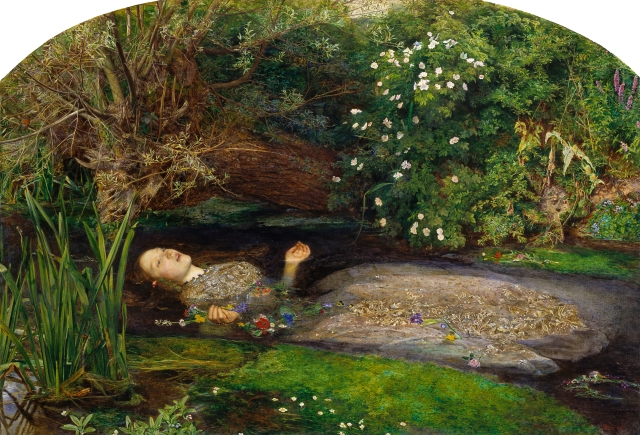 4 Responses to ﻿‘I am half sick of shadows’