The day is warm, the breeze light to non-existent. Technology tells us we’ve arrived at our destination. But technology is wrong, bamboozled by forces beyond its ken.

A woman with bright red lipstick, walking a dog, stops and bends to my open widow.

Turn around in the cul de sac. Back the way we came. Turn right past the Cenotaph. Then follow the signs. To Wycoller. 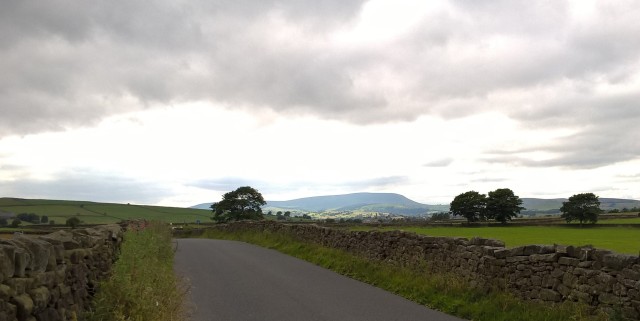 Behind us, a view I don’t see as very ‘Brontë’. Pendle Hill, made infamous by the 17th century Lancashire witch trials 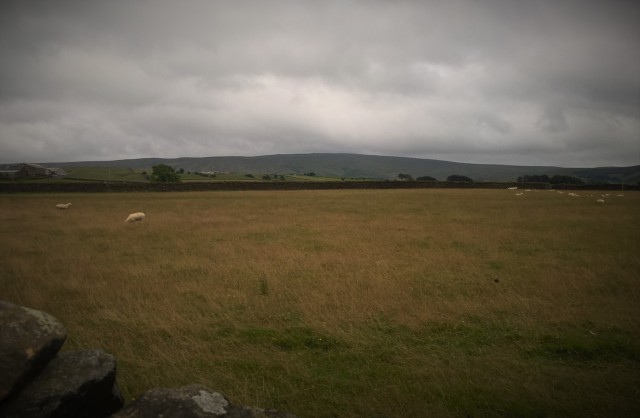 Now this, the other side, is more of a Bronte view, don’t you think?

Odd, that. The signs not looking our way. Showing their faces only to those who’ve reached the end – and not found it. Weeding out the faint-hearted.

The large car park is mostly empty. Clumps of tough grass have breached the pale grey crust of ageing tarmac. Reclamation by nature is well underway.

Hawthorn berries are still bitter green, with a tinge of ripening russet.

And there, a wild rose grows, fragile and pink. ‘Charlotte’s rose’, for me, evermore.

I can’t resist. Out with the camera.  A picture, just because.

The wind picks up. Blossom, leaves, stem all dance to its tune.

I put the camera away. And the wind abates.

Oh, well. I shrug and we walk on down the hill. But there’s another Charlotte’s rose.

Out with the camera, again.

In the stillness of middle day, a mischievous wind arises. I give up, with another shrug. Put the camera back in hiding. 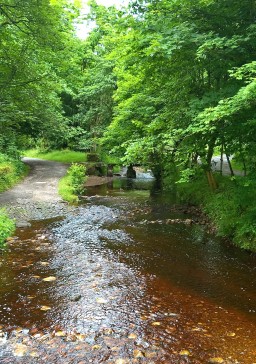 An ancient bridge, a ford, a stream. That tea brown, shallow water. Has it flowed down here from Brontë Falls?

A cloud of midges, riding a sunbeam, dithers over the opposite bank.

And there, beyond the trees, across the ford, over the bridge and tea brown water, it is: the ruin.

No, not that one.

Perhaps it’s the empty shell, the fire-blackened ruin that signified doom – and liberation – for Mr Rochester? 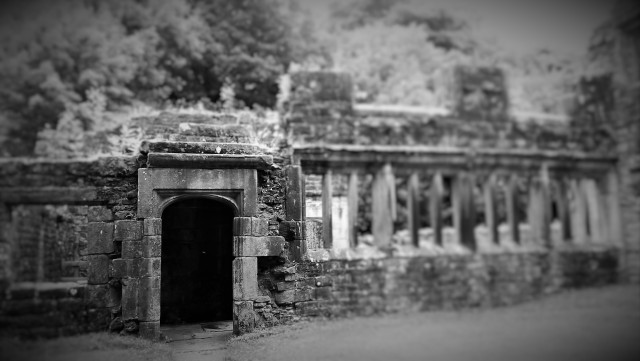 But the house that now lies desolate, in ruins, was, they say, the model for ‘Ferndean’. The house in which they lived, dear reader, after she married him. Jane Eyre and Mr Rochester.

The path across the bridge is worn deep into ruts by the passing of many feet. 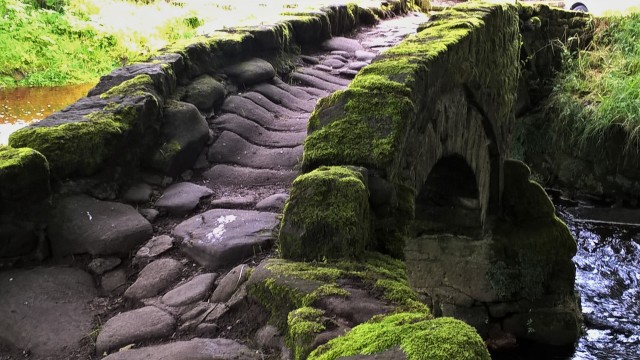 Trees encroach upon the old hall. A heroic fireplace stands proud in the empty, roofless chamber. Children scramble on the ‘do not climb’ masonry. 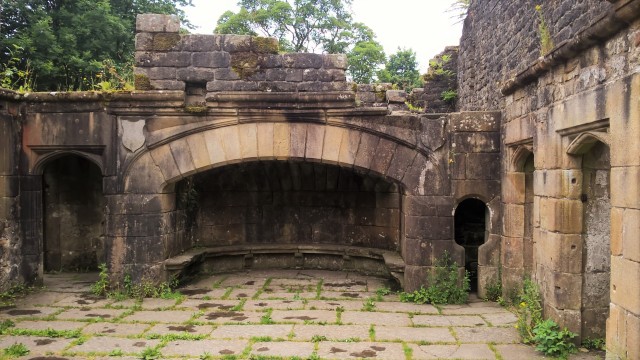 An air of tranquillity – and, perhaps, resignation – permeates the one-time home.

Recklessly lost by a gambler, part ruined, used as a hunting lodge. But never, it would seem, a truly happy place.

A barn contains displays, the history of the hall’s building and decay. The local village’s rise to prosperity thanks to weavers of wool, its decline thanks to the steam-powered looms.

A lone volunteer wipes the bat dung from benches.

‘They eat the midges,’ she says.

Those tiny insects with their insidious bites, not felt till after – and then long after.

‘A midge of a woman…’ says a gossip, of Jane Eyre. Words put into his mouth by Charlotte as the stranger describes Jane, incognito, to herself.

The one-time governess is now an heiress, of independent means. Returning, seeking news of Mr Rochester. Not knowing what she might find.

But what a miserable description. In so many ways.

A midge of a woman.

Was this Charlotte, using the voice of a fictional stranger, to describe how she thought others saw her? I wonder. I’m sure some scholar knows.

Midges aside, the tiny village around the hall is charming, but offers few amenities. A tea room, though, is one.

Inside, a small gift shop sells spells, potions and incantations. We are after all on the trail of those poor maligned creatures, the Lancashire witches.

Despite the dark interior, the place feels good. Homely. Welcoming. 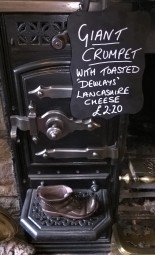 We order giant crumpets with Lancashire cheese. And tea.

Outside again, we stroll over the bridge, gaze up the path to Haworth. Nine miles too far away.

We head back up the hill. 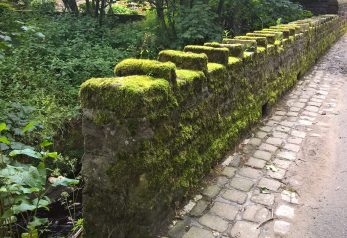 The green of a damp valley 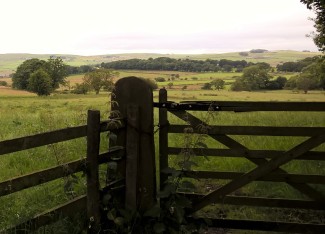 The camera’s in my hand when another pale pink Charlotte’s rose entices me to stop.

As I point the lens, the wind rustles through the undergrowth and the roses shudder.

Charlotte doesn’t want her roses captured. It’s her sigh from beyond the grave, this gentle wind.

No, I don’t really think she’s here and haunting. But there may be some lingering magic.

After all, it is a hidden valley. 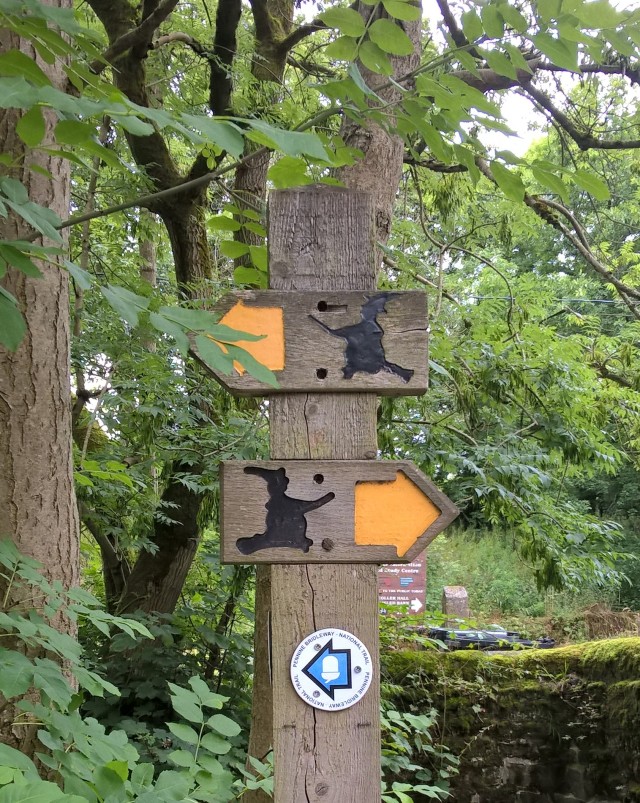 The whole Wycoller area, its landscape and the village’s treasures, are one more thing under threat thanks to ‘austerity’ measures, in this case cuts to local council funding, in Britain. Lancashire County Council has to find a new guardian for the house, barn, car parks and landscape by 2018. The cuts are already biting :

Notice in one of the car parks

7 Responses to And Charlotte sighs