Golf. Just when I’d begun to …

Posted on July 1, 2014 by memoirsofahusk

I won’t say accept it, that would be silly – what difference would that make to anything (or anyone)?

Tolerate it, perhaps? No, it was a smidge more positive than that – but anyway.

A few days ago I opened the garage door and led out my plum-coloured steed to bask in the warmth of the sun. No,  don’t call the RSPCA – it’s not a horse. It was just a silly metaphor – or do I mean analogy? Whatever – it’s a bike.

I was going to say, no-one would keep a horse in a garage. But I know someone who did. A chap called Fingers who – of course – had none on one hand.

He was a rag and bone man. Had a garage behind the Victorian house in which I took out my first mortgage. A flat in south east London.

An Irish man called Sammy mended washing machines in a sort of large, glazed shed at the bottom of our garden. He was almost always there, alone. Or chatting with Fingers.

After the Harrods bombing by the IRA (we were in the Science Museum at the time and were evacuated through the basement) I’ll be honest, I began to wonder about him …

But back to my sunny day.

It wasn’t just sunny, it was warm. The two don’t often coincide here.

And seeing sugar-plum bike standing there, all idle and shiny, I thought, why not? Let’s go for a spin.

Despite a yearning to feel the wind in my hair, I donned my helmet (with very bad grace) and pedalled off up the road.

There was hardly a whisper of wind to ruffle my hair. Which was squashed firmly beneath the health and safety head-wear.

A few minutes later I was going up the only ‘hill’ around. I made it to the top without resorting to dismounting and pushing. Proud of myself, I was. And not so breathless that I was distracted from the reward that greeted me as I reached the (let’s be honest, not very elevated) crest.

Tall, strawberry-blonde grass, rustling – ever so slightly – in the tiniest of breezes. Coltsfoot flowers, dotting the scene with points of yellow, like stars dot the Milky Way. Poppies playing the harlot round the edges.

And beyond it all, tantalising – the electric-blue of the sea.

Down the shallow slope lay a cluster of angular white buildings. They reminded me of an early aerodrome, in the days when to fly was to travel in style. If slowly.

It was a scene out of Poirot, if you see what I mean. Sort of nineteen thirties and unspoilt.

I’m distracted as I drive (four wheels, no helmet) past on my way to the supermarket. Rehearsing the ingredients I need for tonight’s pasta. Determined not to forget the window cleaning stuff.

On the way back, window-cleaning fluid successfully purchased, driving at a sedate 30 in a 30 mph zone, I turn to relish the sunny sea.

The grass is shorn. No cheery yellow coltsfoot or daring scarlet poppies. 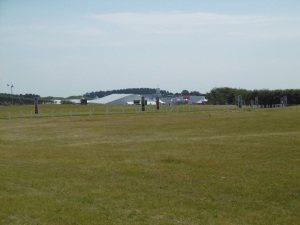 And the aerodrome of my imagination? Eclipsed by a massive temporary structure in white. As if a vast crime scene has been discovered and a CSI squad has moved in.

It’s for the golf. The Women’s Open.

I guess they don’t want flowers.

At least the sea’s still blue.

6 Responses to Golf. Just when I’d begun to …