Temples, ruins and too much information

Posted on October 17, 2014 by memoirsofahusk

Monasteries, abbeys, priories – they never look so good as when they’re ruined, don’t you think?

I spent many a childhood holiday trotting behind a father who was batty about architecture. Grand houses decked out in precious furniture and china and paintings. Castles and abbeys in varying states of decorative decay. Cathedrals and churches held aloft by flying buttresses and topped by soaring spires.

Which is probably why I like nothing so much as a jolly good view. Romantic ruins silhouetted against moody skies. Empty buildings blessed by an absence of furnishing.

I know, shameful admission. I am ashamed. But it’s true.

A few weeks ago we went holidaying in God’s own county – Yorkshire folk are modest about their home – which has more than its fair share of romantic ruins. 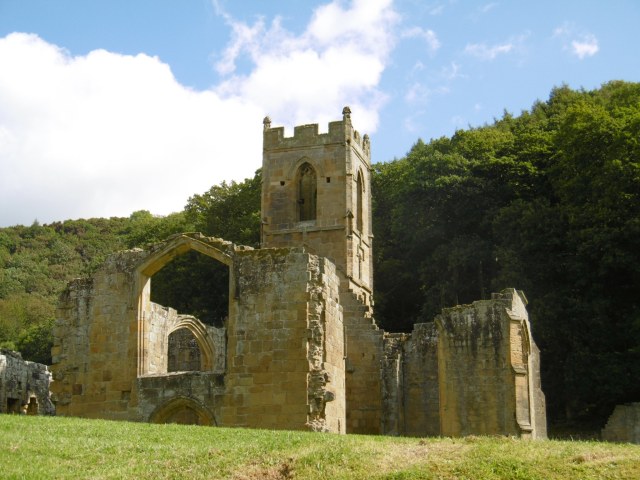 The first romantic ruin – a hasty swerve off a fast major road that almost had me praying – was Mount Grace Priory. There, before the smash and grab of King Henry the greedy, Carthusian monks lived isolated lives in a community of non-communication.

It was built as a kind of commune of hermits – they came together only for prayer in the chapel – around three times a day.

Seen with modern eyes, it sounds an idyllic life. A small cottage, meals delivered, a little garden for growing herbs and vegetables.

But then there was the prayer. And the work. And the lack of sleep.

The routine, at the original monastery at Chartreux, still begins at 11.30 at night, with prayer. Two or three hours later there’s a short sleep.At 6.30 in the morning a day of alternating prayer and work begins, ending around 8 pm with another snooze.

I feel sleep-deprived just thinking about it.

Add the chill air of winter, the rough woollen gowns, the injunction not to bathe too much, the blood letting …

Anyway, in common with the other ruins we visited, Mount Grace suffered destruction as a result of Henry VIII’s ‘dissolution’ of the monasteries. But there’s still a remarkable amount left standing. 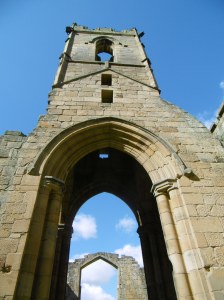 Each ruin I visit makes me marvel at the labour involved in building such monuments to the Christian God.

Fragments of glass painted, joined, with strips of lead, into delicate-looking but formidably strong – and beautiful – windows.

And all destroyed by a man who wanted to dispose of one wife and take another. To sever his ties with an inconvenient Pope in Rome.

It’s not a simple part of our history and one brought up ‘Roman’ Catholic must beware oversimplifying – especially when it comes to the martyrs.

Bonfires were lit under many people in those dark days, not just Catholics – and not all the monks were blameless souls praying for others. In fact, monks were some of the canniest businessmen of their day. As you learn at Rievaulx Abbey.

Rievaulx has a special place in my affections because of its name. I don’t know whether schools in Britain still do the ‘house’ thing. It was (maybe is) a kind of club within your school that everyone had to belong to – they had a team colour and tended to be sports-dominated.

When I first went to ‘big’ school, aged 10, our houses were named after sites of martyrdoms. Gruesome. But some kind nun must have realised we had enough ‘grue’ in our diet, what with our patron being Margaret Clitherow, a butcher’s wife who was put to death by being crushed beneath a door.

Anyway, abbeys became our new houses and mine was twelfth century Rievaulx, our house colour yellow. (I still have the badge.)

It was with some affection, then, that I gazed down upon the ruins from my vantage point near a ‘temple’. A temple built as a summer dining house by the lucky chap who bought up some of the ruined abbey’s estate.

Gorgeous, spectacular, dreamy, romantic. And beyond my ability to capture with a small silver box and millions of pixels.

I still hadn’t learnt how to focus on the distant vista – the hazy day and pale ruins combined with an automatic focus fixing itself on dark greenery was not a good combination.

Nice dining room for occasional use!

A walk of a mile took us from one temple to another, oohing and aahing at views along the way, before we descended the valley to the abbey.

Sheep and their wool eventually made the abbey rich – and made it a key part of the regional economy – so when disease among the sheep ruined its finances, the king of the time had to step in to save it.

A bit like the banks and the banking crisis.

As a big enterprise, covering a wide geographical area, many lay people – and their families – depended upon the monks. When the monasteries were destroyed it was not just the religious who suffered.

Is romance always tinged with sadness?

Is it that knowledge, lurking beneath the pleasure, that all good things must, one day, change? One day, come to an end?

I peer through the evocative, empty windows, wander the lumpy grounds and wonder. If only Henry hadn’t – what would this island be like, today?

Husband and wife artists capturing the afternoon shadows in watercolours

We’ll never know, but we can imagine. Make stories of our own.

People it with ascetic, holy men or fat self-indulgent abbots. And sheep.

Historians can argue its meanings, poets ensnare its mood in words, artists capture its afternoon shadows in paint.

For that, I suppose, we have Henry VIII to thank.

5 Responses to Temples, ruins and too much information