Seagulls’ wings, the Snow Queen and a musical time machine

Posted on December 24, 2014 by memoirsofahusk

High wind. The seagulls riding it like rodeo stars, their wings ‘like parentheses drawn in the sky’.

I’m hearing a song in my head.

‘Listen to the oh-shun, echoes of a million seashells …’

I’m back, for an instant, in the house where I lived my first few years on earth. A terraced house, sandwiched between two sets of neighbours who were both fascinating (Canadian Uncle ‘Rainy’ aka René) and diverting (Mrs Vernon, who taught me how to embellish twigs with glitter-wax flowers).

Our house had a tiny kitchen, as they mostly did in those days – cooking being for sustenance not lifestyle. It had a breakfast room, a front (or sitting) room – and it had a middle room.

The middle room was my father’s special place. His study.

From my father’s hand-drawn 1947 Christmas card

As a boy, my dad lived in a part of our northern industrial town called Mill Hill. He won a scholarship to the Catholic College for boys, the other side of town. Eventually, after a spell as a draughtsman, he did a history degree. Until his forties he was the history master at his old school, living in East Park Road.

Mill Hill to East Park Road. It says it all.

He never stopped educating himself and amassed a good collection of classical music, records which I still have.

The arrival of the stereo gramophone was greeted with great excitement. A shiny wooden box on black legs with brass feet. Fabric-covered speakers that could be opened out like ears for us to listen better, or even be removed so they could be set further apart.

In that middle room little-I danced to the Toy Symphony (and scratched it, to my father’s great displeasure). There I sang along to Seven Little Girls (sitting in the back seat). There I listened, spellbound, to Nina and Frederik. For which I have my mother to thank.

The Nina and Frederik ‘EP’ – an Extended-Play, 45 revolutions-per-minute vinyl disc, for those who are too young to know the shorthand – had four songs on it, one of which we used to sing in the car on trips.

‘The sweetest girl, I ever saw, sat sipping cider through a straw-aw-aw.’

But it was ‘Listen to the Ocean’ that stayed in my head, that popped out when I watched the wind and seagulls playing their buffeting game.

I still have that record, still have a record player, but not the rosewood box on legs that I kept for many years till it ground to a beautiful halt.

I clean the disc and put it on the turntable.

Tears come easily at this time of year, don’t they?

It’s a thing of beauty, the song. Voices as clear as an Alpenhorn, yet warm and mellow. The unadulterated notes of guitar and flute. And, for me, the memories.

It takes me back to that red-brick terraced house. To the breakfast room. To the roaring fire and my new birthday chair, sitting close by. Turquoise and white woven plastic, a very modern, miniature ‘60s bucket chair, for newly six year old me.

It takes me back to our black and white television, flickering in the sitting room as I sit, transfixed by the Snow Queen.

Six year-olds, it seems, still like that story. No matter if the edges have been softened into ‘Frozen’ for today’s tender-hearted young.

For several years in succession the version I grew up with was shown on my birthday, a dull day in between Christmas and New Year. When everyone’s fed up with Christmas but not yet ready for new year.

When King Herod slaughtered the innocents, the little boys under the age of three. Quite a day to be born, eh?

But back to the Snow Queen of my youth. Black and white and somewhat sinister. As befits a tale of evil sprites, glass splinters and a beautiful queen of ice.

Translated from some foreign tongue, the little boy’s name sounded like Guy, but now I know it was Kay. And the little girl – not a princess, just a girl – who saved Kay, she was called Gerda.

Kay’s vision turns ugly, as his heart freezes to a block of ice. He uproots the roses the two children used to admire each summer together. And he vanishes, one wintry day, with the queen of the snow.

Gerda battles magic and ice and betrayal. Help comes from unexpected quarters, though – like the Little Robber Girl.

But in the end comes summer.

Kay and Gerda, two grown-ups, sit in their childhood chairs.

And the roses bloom again.

So there you have it, a trip back in time thanks to one fondly remembered song – and a soaring seagull on a high wind.

What magic one song can work.

And, with that, may I wish you a Happy Christmas, dear reader.

I hope there’s some magic in the air for you. 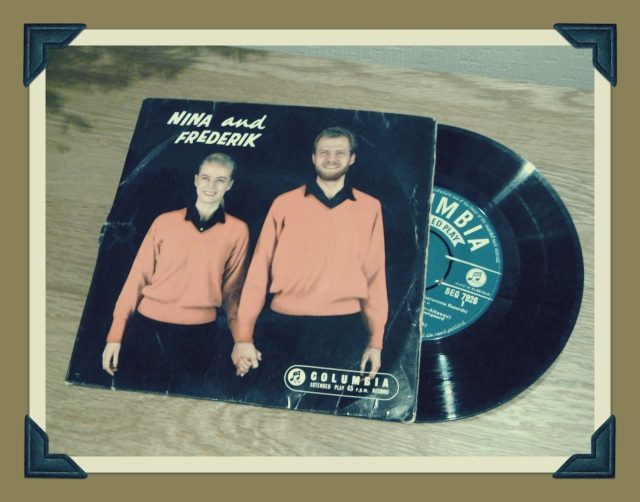 14 Responses to Seagulls’ wings, the Snow Queen and a musical time machine