Five foot two, eyes of blue, yellow bags – and a grand tea, too

It’s a strange song, Delilah. Creepy and jaunty – how can that be? 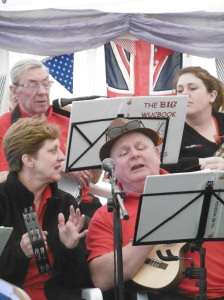 The song made famous by Tom Jones is being rendered here by the Wigan Ukulele Club.

It’s a sunny Sunday in Southport. We’ve parked pearly white Issy (our new car) in a field. And there’s steam up ahead.

There’s a wintry nip in the air despite the sunshine – but I’ve come prepared. Thermals, duffel coat and scarf.

All around, men from the Rotary club are doing their utmost, ensuring the day goes well, with a toot and a hoot and a hiss and a chug. 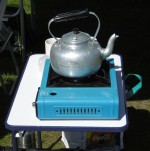 So British – always time for tea

But despite the happy crowds and gleaming paintwork, the steam and tiny dogs, the men in dark blue overalls and the women brewing tea, there’s a touch of melancholy in the air.

The man who was a driving force behind the annual event, a big local farmer, has died of leukaemia since last year’s event. 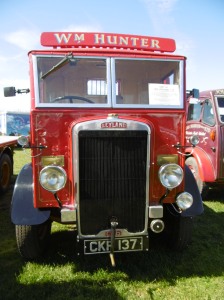 This 4th generation family farming enterprise (now Huntapac) was founded in 1942 by one William Hunter and still operates with fleets of red lorries today.

A row of gleaming red vehicles bearing his name forms a fitting memorial. And his family’s honouring his name by keeping the tea rooms running – named ‘Aunt Nellie’s’ after his auntie Helen – inside the marquee.

All across one side of the tent, starting beside the customers queueing for tables, sit the ukulele strummers. 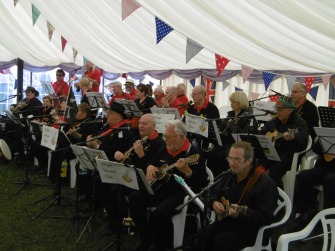 The most excellent Wigan Ukulele Club

We walk past them to table 24, guided by a smart man with a bow tie.

The place is thronged with people of all ages. Waitresses in black clothes and frilly white aprons dodge from table to table with china pots of tea and jugs of milk.

It has the feel of a rather casual, very jolly, wedding reception – if you could imagine such a thing in this age of take-out-a -mortgage weddings.

But the tables aren’t those round things that ten people who barely know each other can sit around, failing to become better acquainted. They’re ordinary tables, laid with paper cloths topped with plastic lace.

The man with the microphone encourages young and old alike (how do we all learn these songs?) to singalong. Choruses ranging from the Kinks’ ‘dedicated follower of fashion’ to, ‘has anybody seen my girl’ (‘five foot two, eyes of blue’, it’s not me, that’s for sure).

Neon kazoos butt in now and then, sounding vaguely rude, like a raspberry blown by a ten year old.

Pink faces, fresh from the outside and warming up nicely, boast happy smiles – when they’re not eating. A baby at the front table, held up as if to glimpse the queen riding by, is loving it. Though it doesn’t seem to know the words – well, it’s not reached the speaking stage yet.

Since all the proceeds go to charity and all the food’s donated, we use it as an excuse to opt for the full tea and (crikey, times have changed) a glass of prosecco with our china cups of Rosie Lea.

Sandwiches and vegetable crisps, scones with jam and cream, Victoria sponge and fruit cake – it’s all too much. We leave a little and waddle our way past the band, with regret.

But outside the big wheel is calling her siren call.

Last year I was a big wheel virgin, this time I’m prepared for the ‘ooh’ as we topple over the turning point. And this year there’s a brand new view – we’re facing the other direction. 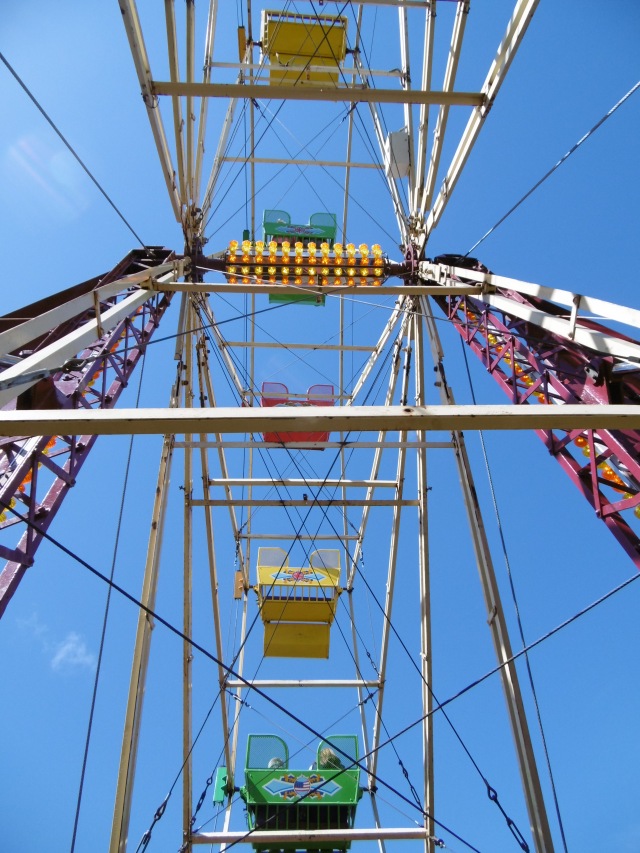 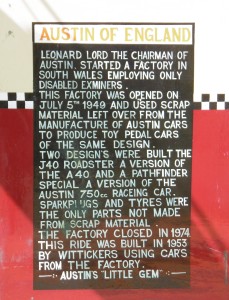 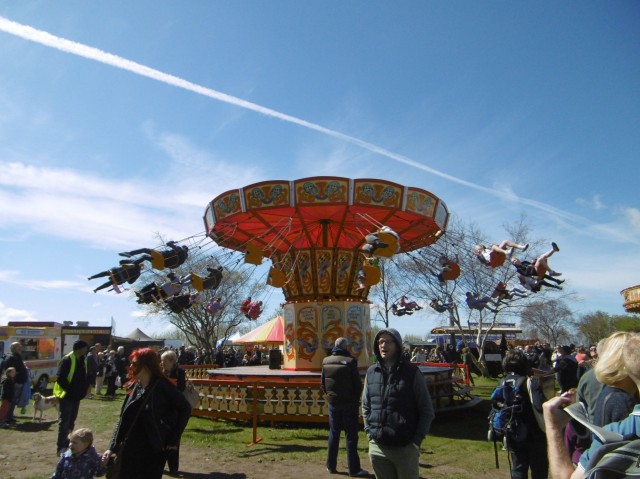 Wind-burnt and exhilarated, back on terra firma, it’s time for people watching. 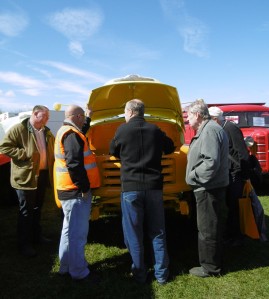 A bright yellow vehicle catches our eyes. Two men chat in broad northern accents about the engine. The owner lifts the bonnet. Within seconds a crowd has gathered, men hovering around the yellow engine, like fruit flies round a decaying banana.

Water pump as ordered by the Royal Navy in 1944

There’s a chugging sound coming from something part wood, part brass, as it pumps water. One of several ordered in 1944 for the Royal Navy its job was to pump fresh water from tanks in ships to feed the boilers. The owner opens up the firebox for my picture – I’m embarrassed I can only point and click, but he doesn’t seem to mind.

Which is such a typical reaction.

It’s an odd event – one I both love and find confusing.

So many men – supported by many women and not a few small dogs – bring along their bit of engineering pride and joy, no matter how small or superficially uninspiring, and, in the chill of early spring – just sit. 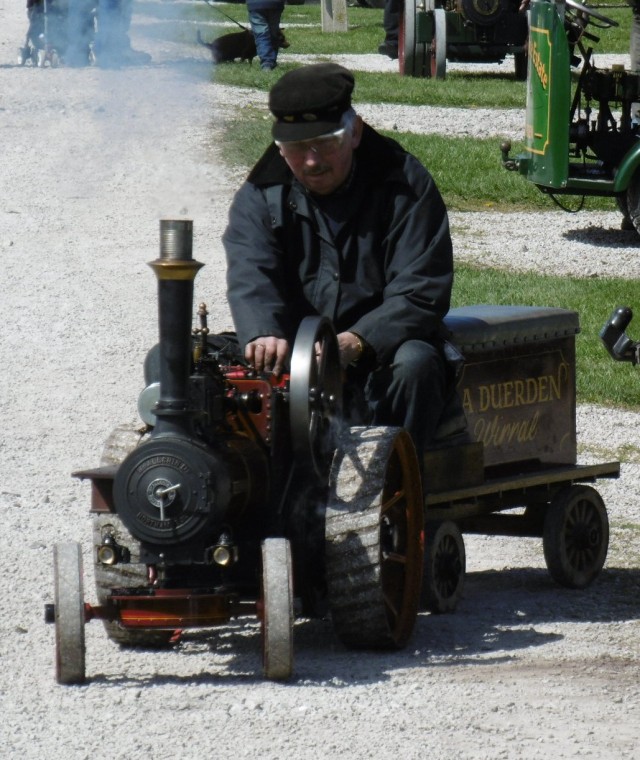 People stop to chat, sometimes. The big beauties, though, are what really draw the crowds – and the attention. A bit like life. But, also like life, what’s overlooked is often as interesting as the showy stuff.

As we wander round I feel the usual tug: I wish.

I wish I had a hobby this enthralling. Wish I were one of a crowd that met at steam fairs, entranced by steam and brass. By shiny paintwork and crank shafts, by moving parts needing constant love and attention.

Well, I think I wish.

Next year, there’s no guarantee the show will return. Not because of the sad demise of Mr Hunter, but because the caravan park’s expanding.

A steam powered milk float – the cylinder on board looks very like the pump the Navy ordered in 1944 to me … well, it’s wood and brass!

It wouldn’t be just the loss of the spectacle, but the potential loss of tens of thousands of pounds for charity. And of a chance for men in boiler suits or tweeds, hats or flat caps, vintage Rolls Royces or milk floats, to get together.

For crowds of people to give the lie to the impression that the whole world is glued to mobile phones.

A good enough reason for hoping the steam fair continues.

That, and the view from the big wheel.

4 Responses to Five foot two, eyes of blue, yellow bags – and a grand tea, too