The Dark Triad and Me. And You

Posted on June 2, 2015 by memoirsofahusk

This post has been resting, in draft form, since 2015. I wrote it in response to a WordPress challenge but was too much of a coward to click publish. Then, just this week I saw the ‘Dark Triad’ mentioned in connection with the current Cambridge Analytica/Russia/Facebook/World-Neurotic-Conspiracy-Theory Day (I made that  up) hullabaloo. And I wondered. At the height (or depth) of the consultancy era of my career in image manipulation (PR) would I have considered doing what CA did?  Well, who knows now. But since it’s topical, I thought I’d be brave and let the captive words fly free, at last.

The Dark Triad. It sounds evil, doesn’t it?

It’s a term used by researchers in the field of psychology (there’s a definition at the end of the post) – and nowadays they don’t tend to use a term like ‘evil’. But that ‘dark’ does not, trust me, signify a bunch-of-flowers-and-a-box-of chocolates attitude to life. Unless someone wants something, in which case the chocs and carnations are all part of a plot.

But, I’m getting ahead of myself.

I heard the term ‘Dark Triad’ used by an academic of my acquaintance and, after looking it up online, felt a disturbing little rain cloud settle into my psyche.

Machiavellianism? Narcissism? Psychopathy? Well, set aside the latter, but – let me be frank – if you’ve ever been in PR at any serious level you’ve certainly played with the Prince’s methods and as for clients, I’m not saying they’re all narcissists but …

Disturbing stuff. And a classic case of the ‘give a dog a bad name’ genre of terminology.

It was the Dark Triad that leapt to mind a few months ago when I saw a Daily Prompt from WordPress.

It was a real temptation for a blogger, that prompt.

Because it was all about – me.

I’m running around a playground, in a pretty summer dress, wearing white ankle socks and red leather sandals. My arms are flailing as if I’m trying to fly.

But, hang on, the challenge was to write about me as seen by – well, let’s say, you.

If you’ve read many of my blog posts over the last three [sic] years, you’ll probably have formed an impression of me.

I’ve been emotional, glum, depressed, elated, happy, sad, cross, worried, exasperated, pompous, insecure, pedantic, questing, angry, lost, melancholic – and nostalgic. But always, I suspect, by reason of the simple fact of blogging, vain. [ha, not much change there then?]

So what would my imaginary YOU think of the online version of me?

And why on earth am I doing this?

She’s a little pompous, is our M, I suspect – and inclined to be self-righteous. She says she’s insecure but actually she’s very secure, or should be – you can tell she’s had a good education but she’s always playing it down.

She loves trying new things but always wants everyone else to like what she likes – I suspect she’s difficult to be around – doesn’t like it if you disagree with her. One of those people who’ll argue the opposite of whatever, just because.

But quite likeable, in person, because she takes care to ask about you – and to tailor her conversation to yours, to avoid subjects that you don’t like – in other words, she tries very hard to be liked – so she is, really, quite likeable.

She makes much of her Catholic upbringing, so I suspect she has a lot of inbuilt guilt – they always do, don’t they? And I suspect she hates to have to consider other people all the time – as she does – and not be selfish. Though deep down she is very selfish.

But I can hear her arguing that everyone is selfish, it’s just that most people aren’t honest and wouldn’t admit it.

I’m not sure she’s actually narcissistic, because the definition (below) suggests that a narcissist is lacking in empathy – and I can see that she empathises with folk to a degree which she herself finds uncomfortable.

She has tendencies towards it – after all that time in business as a woman, competing with men – did I say I think she’s really quite competitive? – she must have developed a degree of deviousness to help her get ahead. But I don’t think she has a ‘cynical disregard for morality’.

And if ‘the trait of agreeableness is strongly absent’ – well, unless she’s a real mega-bluffer she’s not a Dark Triad spirit.

You know, thinking about it, she’s not put her real name on the blog site, though you can find it if you want to – so maybe I’m wrong, maybe she is a little insecure. After all, if you’ve written a book and published it don’t you want to tell the world?

Or perhaps she just doesn’t know who she is.

Which, frankly, at her age (I’m guessing she’s not what you might call young) is sad.

Will I keep on reading her blog?

OK! Now stop it, that’s enough. Back to the real me.

Regular readers, don’t respond, this isn’t a fishing expedition and I really don’t want to know. 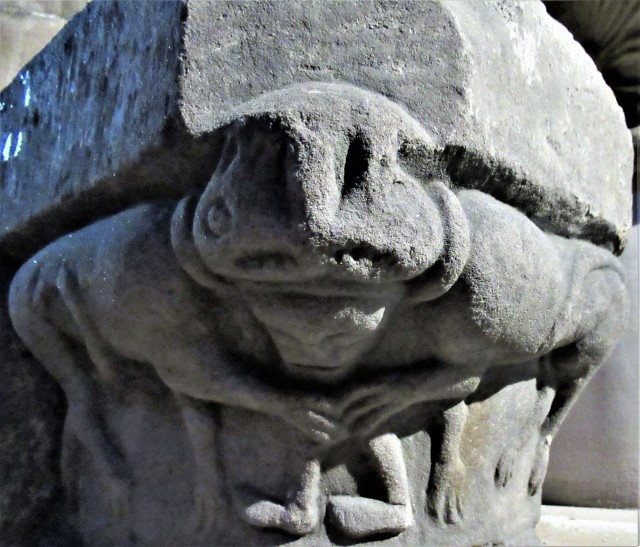 This is the basis for my header image btw, a stone beastie from the church in Kirkby Stephen where Loki also hangs out

The Dark Triad (from Wikipedia)
The dark triad is a group of three personality traits: narcissism, Machiavellianism and psychopathy. Use of the term “dark” implies that these traits have malevolent qualities:

All three traits have been associated with a callous-manipulative interpersonal style.[11] A factor analysis carried out at the Glasgow Caledonian University found that among the big five personality traits, the trait of agreeableness is strongly absent in regards to the dark triad, while other traits such as neuroticism and a lack of conscientiousness were associated with some of the dark triad members.

Like Loading...
This entry was posted in Thinking, or ranting, or both and tagged Cambridge Analytica, Dark Triad, Facebook, Machiavellianism, Me, narcissism, psychopathy, Russia, vanity, World Neurotic Conspiracy Theory Day. Bookmark the permalink.

19 Responses to The Dark Triad and Me. And You