Do you think northern England’s railway system need some investment?

We went by train – 35 miles or so as the crow flies. More than an hour and a half, on a Sunday.

‘Uncle Joe’s mint balls keep you all aglow,’ proclaims the slogan on one near Wigan station. Still hand-made, over gas fires, as they have been for over a century. 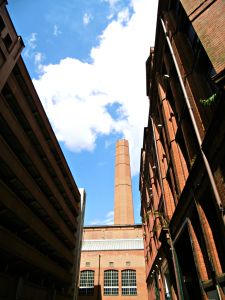 Eventually we’re in Manchester, checking in at a luxury hotel. The Radisson Blu Edwardian.

Ascending in the lift, serenaded by Pan Pipes, I’m half expecting jungle vines to start curling down around me.

The room’s serene and minimalist. Devoid of clutter such as printed matter. Except for door labels and laundry lists from The Radisson Edwardian London.

Pity the disoriented international traveller. Well only if he has no idea where he is or how much breakfast round here costs. 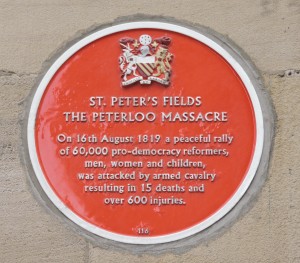 Anyway, as the red plaque on the outside of the building tells anyone who walks past and looks up, this is – was – the old Free Trade Hall. The hotel now rises like a tall, sharp, shiny alien behind its remnant facade.

The Hall, built between 1853 and 1856 in the ‘palazzo’ style, stood on the site of the Peterloo Massacre. Funded by public subscription, it celebrated the repeal of the Corn Laws which had caused such hardship to working people. 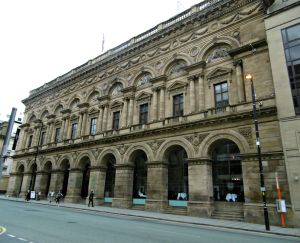 Facade of the old Free Trade Hall after the sun went in!

It was damaged in World War II. Manchester, hub of the world cotton trade until the 1960s, suffered heavily. My mum and dad talked of standing on a hill in Blackburn (just over 20 miles away), watching, horrified, as Manchester burned.

Rebuilt in the early 1950s, the Hall’s civic life was terminated in 1997 when the city sold it to a developer.

As well as the façade, they kept a series of stone statues that was added during the 1950s rebuilding – but they’re not anywhere obvious. 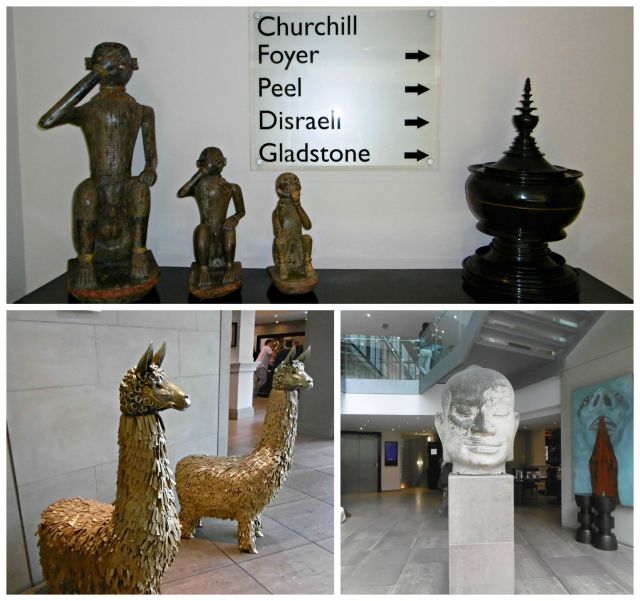 I ask the young woman behind reception about the statues.

Seems they’re in the stairwell down to the spa.

So we descend, only to find they’re in pairs going way, way up to the top of the building.

After climbing three floors for three better views, it becomes more difficult. We give up and leave – because it’s time for our guided walk.

Down a side street the new British citizen reckons a crowd is gathering. I pooh-pooh that – obviously it’s a queue at a bus stop.

But some forty minutes later, our walk reaches the very same spot. And it’s a crowd.

Singers, guitars, dogs, people bask in the warm sunshine – or is it the celebrity afterglow?

We’re now standing on what was St Peter’s Field. I peer around seeking a memorial. In vain.

So far all we’ve seen is some small red stars commemorating victims’ names, in the floor linking the central library to its extension.

Next we reach the red plaque on the wall of our hotel and gather – uncomfortably – around a seated beggar who soon moves on. Us? Or the policeman heading our way? 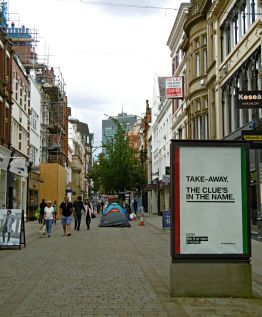 Protesting about homelessness in the heart of the smart shopping districts

The guide points out the wall of the Friends’ Meeting House, there when Peterloo happened.

A few minutes later we reach a whole building that was there – now a pub, supposedly haunted by victims.

A developer wants to develop it.

Is the building protected?

Is there any memorial on it?

Our guide recites the last few verses of Shelley’s poem, The Mask of Anarchy, as the Town Hall bells toll. Ending,

Rise like Lions after slumber
In unvanquishable number–
Shake your chains to earth like dew
Which in sleep had fallen on you–
Ye are many — they are few. 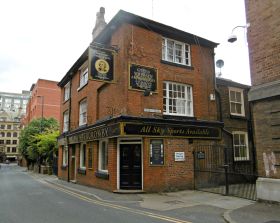 And we adjourn to the pub.

Support it while we can.

Over a half of Cheshire pale ale our guide recommends the People’s History Museum – and we leave for an evening of Italian food and wine happy in the knowledge that Monday will bring another new experience.

The spirits of the radicals must be smiling on us.

For this is the rainy city where Marx and Engels met, the city of which de Toqueviille and Mrs Gaskell wrote.

We trudge the wrong way down a main street, past a statue of Chopin (he played here, once) then have to ask directions.

Among the many signs directing tourists, it seems none point to the People’s History Museum.

Eventually we arrive. We’re given a map, told what’s on and – oh, by the way, one of the Labour leadership election hopefuls is talking right now.

We sneak in, stand at the back.

I can’t say the atmosphere’s electric, as it was in Liverpool for Jeremy Corbyn.

Andy Burnham seems smaller in real life. Gives the impression of being made-up (I mean with make-up, not imagined, or just chuffed). 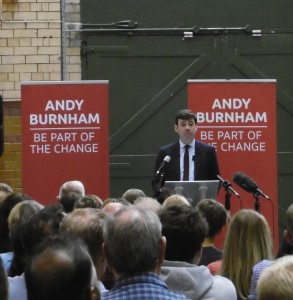 He tells us he agrees with Jeremy about lots of things – but would be better at uniting the party. And he gets a (mostly) standing ovation.

I sympathise, but don’t think he’s the man for the job.

Upstairs I peer into the gloom – created by sombre lighting – and suppress a groan.

Lots of ‘open this’ exhortations.

I’m not sure I can take it.

But, a considerable time later I’m sorry to reach the exit.

The tea room and a warm scone win out over an exhibition on the miner’s strike and we leave Manchester with minds and waistbands stretched.

A sense that ‘the great and the good’ who run Manchester don’t think that their proud, long radical history is good for … well, business.

Never have, since Peterloo.

Let’s hope the city produces a memorial before the 200th anniversary of Peterloo in 2019. There’s a campaign group you might want to support if you’re interested:

I’ve also checked the Radisson Hotel website. After an exchange of emails with them I can see they have already added some historical details to their home page. Well done Radisson! A new leaflet next?