It’ll all end in lawnmowers

Posted on September 22, 2015 by memoirsofahusk

To be honest, it was worth it. Not least because it was all my fault.

You see, I’ve been a bit irascible the last few days.

It started with Saturday. A sleepless night.

It had been a rough day.

We were off, on our bikes, to see the retiring Vulcan bomber (my bro-in-law flew them) at our local airshow. Hearing sirens, heading downhill at speed, we veered off onto the footpath for safety. There was an almighty bang and we saw a figure flung up in the air.

A police motorcyclist, escorting an emergency ambulance, had hit a Mercedes which, it seemed, had pulled out into its path. The ambulance had to carry on, leaving him lying on the ground.

It was horrifying – I was convinced there was no way he would survive, but he did. I’ve found out since he’s recovering, thank goodness.

Anthro-man offered his first aid skills and contact details for a witness statement. I pacified a baby while her mum, in tears, told the police what she’d seen. It was uncomfortably close to home – her dad was a police biker.

And after a bit of shocked dithering we decided to go on. But we didn’t stay very long.

One of our two regular newspapers, the left-leaning one, studiously ignored the big lefty news. A mass influx of new members into the party it ostensibly supports. Instead it reported rumours of defections and new parties and … so on.

Only one bit of support for what is going on snuck into its pages, from Ed Vulliamy, a respected journalist whom I knew vaguely at uni.

Monday I discovered that Ed had tried and failed, in autumn 2002, to get that same, lefty Observer to publish an important story.

A CIA agent’s admission that they knew there were no WMDs in Iraq.

I was feeling crabby and jaded enough.

A book was the final straw.

It had me spluttering with disbelief.

Anyone who is under any illusions about the sulking New Labour’s left wing credentials – or indeed about the level playing fields of Britain – should read The Establishment by Owen Jones.

I was reading it on the train into Liverpool last night.

We had a pleasant dinner with a friend in the Old Blind School. We sauntered down the hill, past a Big Issue seller. We paused, looked at him.

‘Well at least you didn’t ignore me,’ he said, ‘But please, can you buy a magazine?’

A few moments later and we were nearing the bombed out church – Liverpool’s most visible reminder of World War II, when the port city and neighbouring Bootle were bombed to smithereens.

It was dark around there, despite the street lights.

A woman in white robes with a blue trim was walking slowly to and fro beneath the overhanging trees. A sister of the order made famous by Mother Teresa.

Tucked away by the fence were two women, a table and two silver, pump-action vacuum flasks.

A man with feathers in his hair and his world on his back homed in on the free hot drinks – then, just as quickly, was gone.

‘Would you like a medal from the sister?’ asked one of the women as she noticed us standing, taking it all in.

‘Can we give you a donation,’ I blurted out, foolishly.

She looked around. ‘No, we can’t take money,’ she said, ‘the homeless people would want it. But if you’d like to buy us some biscuits from the shop over there?’

We bought Hobnobs and Digestive biscuits.

She was grateful. Smiled.

‘Would you not like a medal off the sister?’ 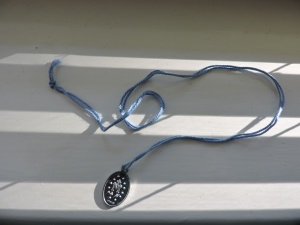 The medal the nun gave us, by the bombed out church, in the dark city night

Anthro-man accepted a small, oval medal on a long blue thread. I recognised it.

He struggled to read the words.

I didn’t need to look.

‘Oh Mary conceived without sin, pray for us who have recourse to thee.’

I was back in a schoolroom in May, the month of Mary. A statue with a little crown of flowers on its head. Singing one of my favourite hymns.

Bring flowers of the rarest, bring blossoms the fairest, from garden and woodland and hillside and vale…

And so to today.

I was standing at the window, enjoying the sun dappling through the trees, when a golfer decided to urinate against a birch trunk – and something snapped.

I grabbed at the handle of the sliding doors onto the balcony intending to open it and shout at him – and broke off the key in the lock.

I was still so pissed off at the pissing golfer that I rapped my knuckles on the window. He looked up, but just carried on and teed off, having peed off.

Petty? Possibly – but – he urinated metres from a little, wooden, garden-shed-like building that is a loo for their use.

But … the locksmith was a very nice man, arrived very quickly, told us all about his boss’s shop (established 1946) and … the National Lawnmower Museum! Of which, you know, there will be more anon.

After I’ve finished that book.

And recovered my sanity.

7 Responses to It’ll all end in lawnmowers