Posted on December 12, 2015 by memoirsofahusk

One of the things foreigners living in England always struggle with is identifying the social trip wires.

How do you hold your fork?

Is it a napkin or a serviette?

Do you need to go to the toilet, lavatory or loo?

And – perhaps more 2015 – when is it socially acceptable to use emojis or textspeak? (Tell me if you know the answer.)

IMHO  🙂   the fact that even the garden isn’t safe has always seemed just a tad ridiculous.
I mean, take the ordinary pink (or blue) mophead hydrangea. Is it an acceptable shrub for a middle-class, wannabe-upper-class, garden?

You’d think the answer would be, ‘if you like it and if it’ll grow where you live, plant it. Who cares?’

And when it comes to music, Gilbert & Sullivan – did I hear several sharp intakes of breath? – is a very, very pink (or blue) musical version of the hydrangea. Not a lace-cap one (they’re OK, especially if white). Just an ordinary, big-bloomed, blowzy one.

The production of the Mikado we saw last week was first performed 29 years ago. And it created a dilemma for the cultured classes then, in its own, small, artistic way.

Not only was it staged by the English National Opera (acceptable), it was – and still is – directed by a man who’s undeniably classy, clever and cultured. A human colossus of taste and style (don’t quibble with my construction, I’m tired, it’s December and I have a cold).

So what did those who needed to read all the class runes correctly do about this radical Mikado (for radical it was)?

I don’t know – and I don’t care. Because I enjoy Gilbert & Sullivan.

I can see the curl of sneering lip, the wrinkle of snooty nose. The not-quite-concealed smug smiles.

My own enjoyment of G&S – the Mikado in particular – goes back to my teenage years, revising for exams, with a very bad cold, at home. My parents had a two record set. I played them, again and again. Loved the tunes, could understand most of the words.

The first G&S production I saw in real life, though, was not the Mikado. It was an amateur production at my father’s school, combining the talents of his boys’ school and my girls’ school in Trial by Jury.

All I can remember about it is the boy I fancied. Gerard. Ges. Good looking, great singer. And a heartbreaker (not mine).

Later in life a boyfriend (well, actually it was a less-than-satisfactory relationship that never quite took off – though we had three attempts at it. He was very sporty – cricket and rugger – maybe that was the problem?)

– sorry, where was I? Got a bit distracted there.

Oh yes. Wicket-keeping, rugger-playing chap took me to see Ruddigore, one of the lesser known G&S works, in Oxford.

Ruddigore stands out for me because of one line. There’s a character called Margaret who tends to get a bit wild. The only way to calm her down is to say, in emphatic tones, ‘Basingstoke, my dear.’

Having worked a couple of years in Basingstoke I’m not convinced of its likely effectiveness.

Last week we went to one of those ‘live’ screenings at the cinema. It was a revival of the same Mikado we were fortunate enough to see all those years ago.

One reason it was and still is deemed so radical is because the set and costumes are all cream and black, the people are smart 1930s society types and it’s set in a genteel seaside resort.

Not a hint of oriental, cherry blossom Japan.

I could hardly contain myself at times, at the cinema. I was desperate to join in. Not just with the songs  – but the dancing. Tap dancing.

I challenge anyone to see this production and keep their feet still. It’s utterly, utterly joyous.

Lest you think this depressive leopard has changed her spots, there was something. More than one something. 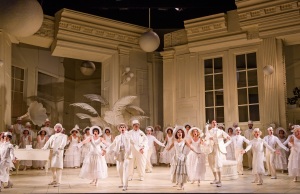 I was not feeling too hot, world getting me down, life passing me by – you know, the usual stuff. It dragged me out of myself and threw me around like a Scottish dancer in a reel. I loved it.

G&S are – IMO – great social commentators. As relevant now, in many ways, as they were in the nineteenth century.

And I couldn’t help but notice the parallels. 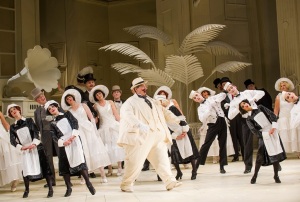 Titipu – the mythical place where the action is set – has an Emperor – the Mikado. To steady the young men of Titipu he’s set a law that ‘all who flirted, leered or winked (unless connubially linked)’ should be beheaded.

One poor chap, Ko-ko, was found guilty of said crime – but escaped by virtue of becoming the Lord High Executioner.

The Lord High Executioner has a little list of people ideally suited to execution because they would not be missed.

I laughed, with everyone else, at the revised and updated version to which we were treated.

And I thought about Isis/Isil/Daesh. And Saudi Arabia.

Decapitation is something they seem to have in common.

It’s no laughing matter. But laugh we did.

And then there was the corruption. Epitomised by the Lord High Everything Else. And by the Mikado being able to say something was so to make it so.

The  agèd and ugly Katisha. Struggling to marry because of her looks and age.

I saw a fun amateur production in which Katisha was in real life a reasonably elderly lady.

She growled and prowled and shook her walking stick at Ko-ko (never mind how we got here) and asked:

“You won’t hate me because I’m just a little teeny weeny wee bit bloodthirsty, will you?

Ko-Ko: Hate you? Oh, Katisha! is there not beauty even in bloodthirstiness?”

And here’s Ko-ko, hoping for an answer in the negative,

“Are you old enough to marry, do you think?
Won’t you wait till you are eighty in the shade?
There’s a fascination frantic
In a ruin that’s romantic;
Do you think you are sufficiently decayed?”

“To the matter that you mention
I have given some attention,
And I think I am sufficiently decayed.” 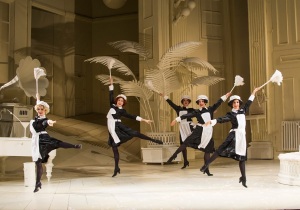 There was more that rang contemporary bells – I won’t bother you with it though (not even the blade and the vertebrae – no don’t ask). I’m aware that sometimes my perspective is a little warped.

And  I haven’t enjoyed myself so much in a long time.

But there’s still a teeny worry, at these contemporary parallels.

“… that singular anomaly, the lady novelist —
I don’t think she’d be missed — I’m sure she’d not he missed!

2. The 1987 version featuring Eric Idle of Monty Python fame as Ko-ko we saw  filmed (not very well) for TV – after this video of Act 1 Act 2 will follow. To see abit of the tap dancing go to 55 or 57 minutes mins on video 1 or for the glorious, exuberant  finale go to minute 58 in Act 2

9 Responses to Beheaded for flirting? LOL!