An invisible man and a nice cup of tea

Posted on January 15, 2016 by memoirsofahusk

On dimly lit suburban streets, in the hours before dawn, it’s as silent as our world can be.

Up in the lofty fir trees, knowing owls watch for prey.

And six days a week, a bold human interloper joins in that world of the fox and the owl.

All year round, he makes his halting progress. Down avenues, round crescents. Up terraces, through lanes.

Gliding along, with a purr and a whine. The occasional rattle of glass on glass. Or the click of a latch on a rare shut gate.

He floats through this crepuscular world, powered by an invisible force.

‘He’ is Keith, our milkman. And electricity powers his milk float. 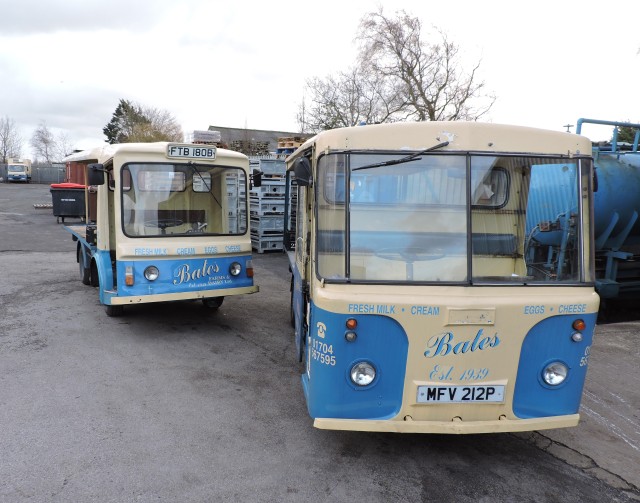 The forerunner of the electric milk float first took to the streets of London in 1889 – at the hectic speed of 2 mph. By the late 1940s fleets of the humming carriers were out and about and horses were everywhere being retired.

The milkmen of Britain have, ever since, been traversing our streets in these quiet, electric-powered vehicles.

They’re not as common as they were – but there still are brave businesses – and customers – who withstand the onslaught of cheap supermarket milk.

Our milkman sets off for work when clubbers have not yet come home. Before bedroom lights have been lit, or kettles boiled for our morning pots of tea.

We’ve not actually seen him, to be honest – he may be an invisible man for all we know. But the glass bottle’s there, by our door, every morning.

When the wind blows 105 miles an hour.

When the amber warning’s out for a flood.

When the snow falls – and sticks.

But Keith’s just one, small cog in a wheel of production and delivery that begins with a cow in a field.

One day (bear with me) I was taking in some donations for refugees. Got chatting to the man who’d delivered them – who offered to help transporting stuff around.

‘I can use one of the wagons after work,’ he said. 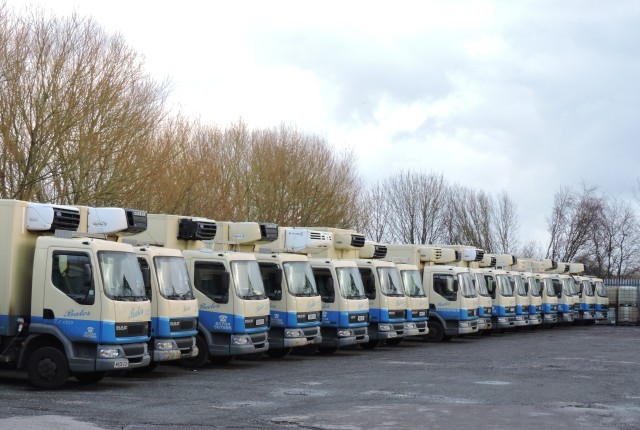 I knew he worked at Bates’ Dairy. But, I thought, that’s a bit bold – won’t he get into trouble?

The response was just a smile. And it dawned on me. His surname. It was Bates.

And if you’ve read much of my blog you know how nosy I am. Always up for a visit to see machinery at work, making a product I like.

Before long I’d blagged my way into a trip round his business, a couple of miles away. 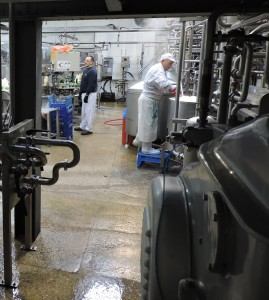 The Dairy’s one of the biggest private employers around here, with a staff of around 90. And it operates every single day of the year. Christmas day included.

‘The cows don’t stop for Christmas,’ as the man says.

He gives the staff a break on Christmas day, though. Is there himself to welcome the farm-fresh milk and load it into the tanks.

Then it can become the pasteurised, homogenised, skimmed, semi-skimmed or just plain whole milk that ends up on our doorsteps.

Talking of semi-skimmed – have you ever wondered how it ‘happens’?

Well, it’s made using the same machine that does the homogenising. To homogenise whole milk it’s forced through narrow pipes under pressure to hit a plate, with some force, smashing the cream and milk together.

Voila! Semi-skinny for your semi-delectation.

The bottling plant does both plastic and glass – but the ‘rinse and return’ glass bottles first have to be cleaned. I don’t feel quite so guilty, now, about the less-than-perfect job we often do on rinsing – the cleaning is exemplary. 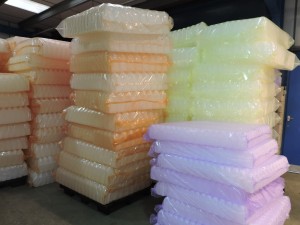 As the glass bottles are filled, piles of colour-coded bags of plastic containers sit in the wings, waiting their turn on the merry go round.

Watching the conveyor belt takes me back to my one, short-lived factory job, bottling condensed ox-blood. That’s where the similarity ends – bottles. No pools of smelly sticky blood here, I can assure you! 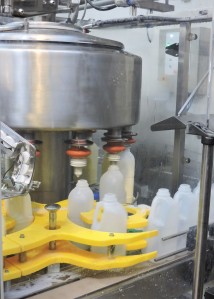 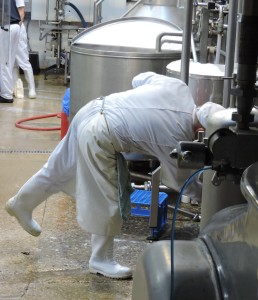 The floor’s wet, with milky water heading for drains. Men in wellies rush around in a non-stop bustle of activity, packing, unpacking, cleaning, checking.

The milk comes from farms to the north, east and south – all within what I’d regard as our local region. The plastic bottles don’t travel very far, either. 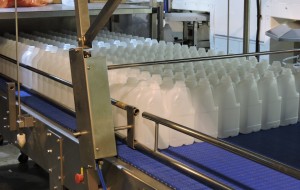 Bates supplies local shops, caterers, care homes, individual homes – and other people’s milk rounds too. No plans to supply supermarkets – and no desire to do so. What they do is enough.

Perhaps that’s because it’s always been a family business, since 1939.

Things have changed, certainly. It’s bang up to the minute, technologically speaking.

And I’m betting no-one in the family is sad to see the passing of the era of the ‘phone up right till the milkman leaves’ cancellation option.

Stevan Bates’ auntie apparently used to get the occasional 2.30am cancellation phone call. You can imagine how that went down.

Even to the casual passer-by it still feels like a local, family business. Thanks largely, I reckon, to the company’s brand identity. 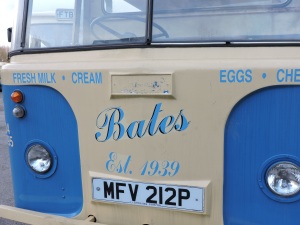 The logo’s just the family name written in script, in blue, on an appropriately creamy background.

There’s a kind of lusciousness about it, like a clotted cream tea. It says comforting, reassuring.

Reassuring in a genuine, not-owned-by-a-hedge-fund kind of way.

It’s great to know it’s on our doorstep. 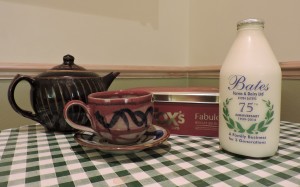 And so, write-up done, it’s time to put the kettle on.

Make a nice cup of tea. Dunk a biscuit.

Then put out the empties.

Rinsed, for return, thanks to Keith.

To find a milkman in the UK try this: http://www.findmeamilkman.net/

Believe it or not there’s a milk float website with FAQs:
http://www.milkfloats.org.uk/
and Londoners can hire one
http://www.theoldmilkfloat.co.uk/