A song (or two) for Europe

On Friday I felt like a shadow. Everything looked real, but I didn’t feel real. The world had changed –  but yet it hadn’t.

Today I feel like a puppet on dodgy strings. One minute I’m acting my part as a human being, the next a string breaks and I’m not sure of anything.

I had no idea it would be like this, leaving.

But then, I didn’t really think it would happen.

No. That’s not quite true.

As voting day drew near, a creeping sense of doom did begin to infiltrate my psyche.

And when I cycled down to the polling station and saw the clogged car park, I think I knew.

We were going to leave the EU.

Writers are meant to be observant – or so I tell myself when I’m being nosy.

I watched. And felt as if I knew how most of the people were going to vote.

It was their demeanour. A defiant look. A  ‘who-are-you-looking-at’ challenge,  spoken by their faces, their posture. And this in an urban village that’s usually very friendly.

Dejected, I set off for the village shops, but then I saw the library. And the dust. And the digger. 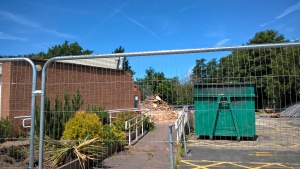 The footpath used to lead to the library door

I stopped. Took out my phone to record the evidence.

An elderly couple stopped to chat. The two of them were very small, seemed fragile.

I knew they’d been to vote and suspected I knew which way, so stuck to safe ground.

How sad to see a library being demolished.

The result of council funding cuts, imposed by central government, I added. Of austerity.

They shuffled off at that, not sure at all.

That’s him, the blue shirt, walking round the site

I moved to capture a different view and as I took the first picture a black 4×4 drew up. A man in a blue shirt came over.

He had an infectious smile, a convex belly and a face that was invitingly jovial.

I took off my bike helmet.

It was hot and sunny and I had a feeling I was in for a ‘well met, stranger’ event.

It turned out he was the man who owned the demolition business – and he was on my side. He volunteered, without any prompting, he’d been to vote – and voted remain.

‘I was the only one in there voting remain.’

His polling station had been buzzing with people, all of a like mind.

We chin-wagged for about fifteen minutes and I made my way home. Happier for the sun and a fellow remainer.

On Friday morning I woke and hesitated. Did I really want to know?

I went upstairs to our kitchen and saw my husband’s face.

In that instant, I felt as if my world had changed forever.

I remembered as a child singing ‘Puppet on a string’ with French children at a summer language school. The song had won – oh, rare event – the Eurovision song contest.

We had not yet joined the European Economic Community, but even then, as a child, I had no doubt where I lived. As I wrote in many a battered storybook:

There was only one universe then, btw.

But on Friday morning the nation had said, we’re leaving you. It’s over. Goodbye. Stick that in your pipe and smoke it.

Keep your refugees, your regulations, your workers’ rights, your bloated parliament and let us take our country back.

Sorry, the anger is finally beginning to trickle through the paralysis.

Not everyone voted as a protest, or out of anger. Many read every last word written and listened to all the debates. Agonised over what was for the best. But then they voted out – and, yes, some of them now regret it.

We didn’t think it would happen, people said, to camera, on Friday.

I’ve cried once, when I tried to read this aloud:

Into my heart an air that kills
From Wales and England blows
Who put the poison in the wells?
Whose razor wires are those?

Theirs is the land of lost content.
They see it shining plain.
The fortress-isle old lags lament
And hope to build again.

[Published in the Guardian newspaper 25 June 2016]

A suitably moody day, but still the sea comes in

But life goes on.The sky is still the sky, the trees are still the trees, the sea still laps the shore.

It’s just that I’m no longer allowed to be the person I was.

The person who was comforted by the blanket of Europe, with all its imperfections.

A member of a clan of all sorts of people, who’d somehow managed to keep together through a lot of thick and thin.

I wait for the bitterness, the anger, the bile that was summoned up by cynical politicians, serving their own ends, to erupt into yet more division and strife.

I hope I am wrong. I hope we all learn to live with it and cope.

And I leave you with the words from another song, this time from the Sound of Music.

Like Loading...
This entry was posted in Britain now & then, Thinking, or ranting, or both and tagged austerity, Blake Morrison, Britain, EU referendum, Europe, Eurovision song contest, Housman, leaving, libraries, Puppet on a string, voting. Bookmark the permalink.

24 Responses to A song (or two) for Europe