Bank Holiday weekend was looming, so the weather was far from perfect. But on Alderley Edge the view was clear and the rain seemed to have withdrawn its threat for while.

Plodding uphill, I’ll be honest, I felt a bit disappointed.

I’d been in the mood for magic.

I’d chosen to wear my 1960s Scandinavian silver ring with the blue enamel. I don’t know why I thought I was a thing to do. The Norse myths, I suppose.

You see how daft a mood I was in?

It’s always like this, when I go expecting miracles.  Like my miserable trip to St Winifred’s Well, to stay with the nuns.

Back to the Edge. 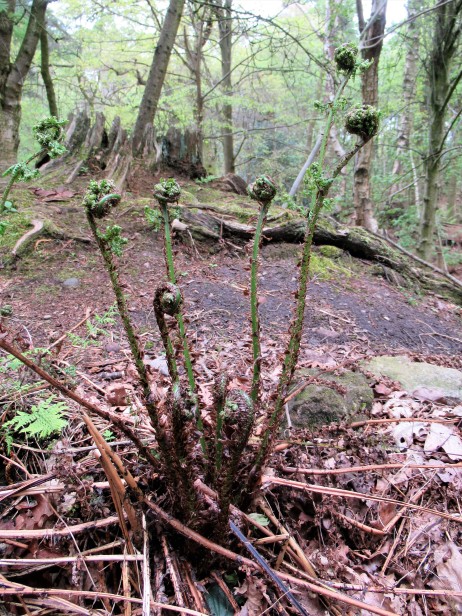 To the juicy green of April leaves.

All working its magic as I climbed up to the Beacon.

Which was not what I expected, surrounded as it was by lofty trees.

But then, the paths led on. To rocks – and a vista over the plain. 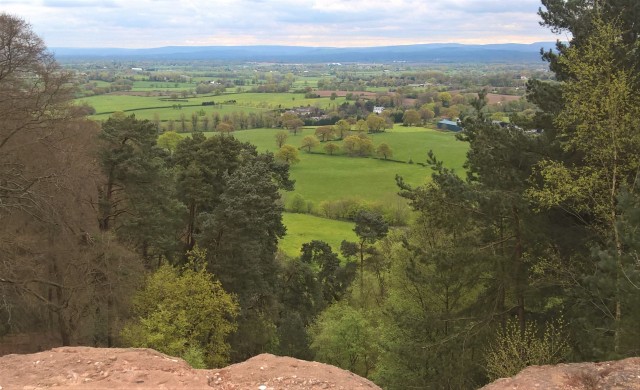 I found the Engine Vein, where Mary [see quote, Part I] went underground. And learned she didn’t need books, to know. 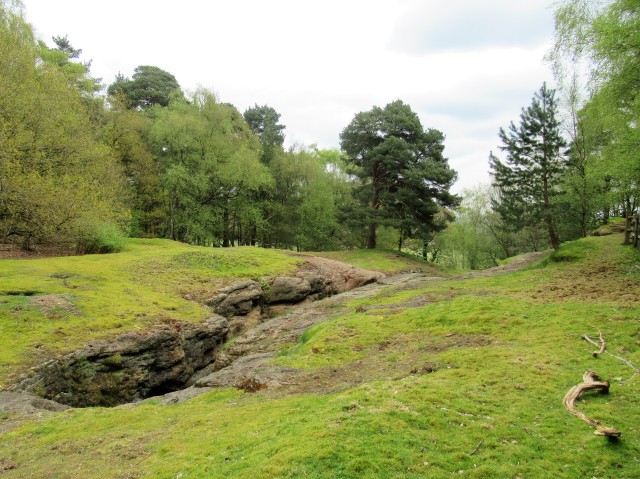 “The Engine Vein was a deep crevice in the rocks, and along it went the tramroad for the miners who dug galena, cobalt and malachite … Mary was not allowed at the Vein. It killed at least one every year … Above and behind her Mary saw the last of the day. In front and beneath was the slope, where it was always night.” Alan Garner, The Stone Book

I wandered up and down and round and about.

Past rocks stained green with copper.

I saw those two dark holes as eyes, watching. I stepped back to get a better view and walked into the grabby branches of a tree 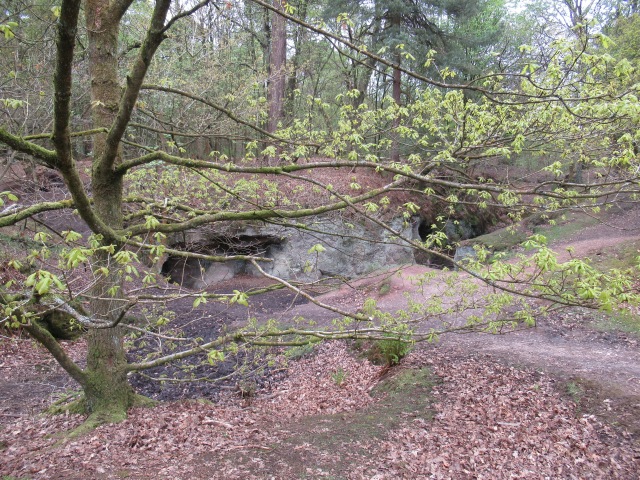 And still they watched as I walked away! 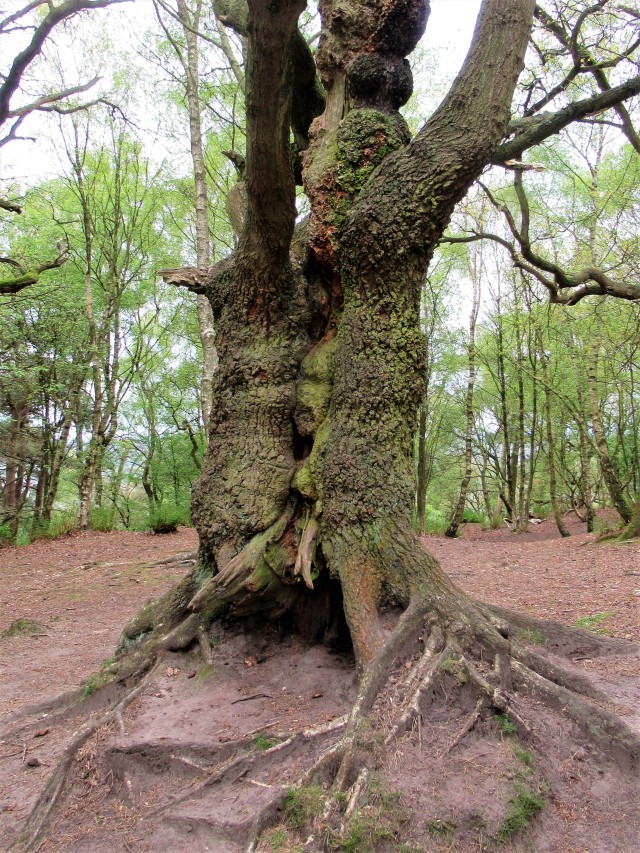 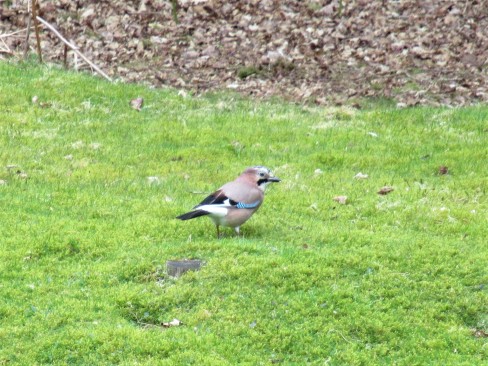 And ominous black birds. Demons in disguise? Guardians of the magic? Or familiars?

I felt a little frisson, as if I was being watched. Silly, I know. But still,  I was glad there were people passing, now and then. Enough for reassurance – but spaced for some isolation.

A bellowing sound rose over an incline. A child appeared.

‘Was that you?’ I asked. ’Goodness, I thought it was a monster.’

His mother smiled, turning her doting gaze down on him.

The child, not long ago a toddler, looked at me with an empty face and cold eyes. Raised a stick he was carrying. Pointed it at me.

A broken twig had left a nub behind and his thumb went to it as he stared at me.

His mother realised too. Shocked she gasped, ‘Henry, no, really!’

Hmm. Maybe remnants of dark Old Magic lurked there after all…

Back at the car park I bought a cheery orange lolly-ice from the ice cream van. Ate it beside a hedge of May blossom, scanning the horizon.

Then set the sat nav for home.

Fool that I am, I tapped, ‘avoid freeways’. Again. Thinking the traffic – by now it was approaching 4pm – would be worse on motorways.

I turned around. Set out.

But The Edge had put its curse on me.

She-who-must-be-obeyed led me down long country lanes to ‘road closed’ signs. Stopping me from accessing every available route, or so it seemed.

I was trapped in a spider’s web, woven by malign traffic spiders.

Once more I found myself in the constituency of former Chancellor, George Osborne. I gritted my teeth and drove. Reached a small town, relieved that at least there I’d find some signs.

And the first signs I saw were for:

By this time my head was bubbling with rage.

I’m going to leave the words I typed just as they left my fingers – so you can see how cross I (still) was:

I am glad when people do well in their lives, but there’s soemthign about the thought of a man who earns £20,000 an hour* for speaking that makes me furious. That and thde fact that he is an MP, with duties, and a slary, and a family firm that make shim money. Hoe gredy can one man be? And isn’t it immoral? this man’s recebtly been key to the running of the ocutnry alebit badly – he was the argcitect of the faile austerity prgamme after all, whose targets wreemnsieed and whos ergiuem sasw poor people iwht one spare bedroom penalised whiel the rich got spared some of their inheritance atx.

As I left that prosperous Cheshire town, I was seething.

And then I found what felt like salvation. A dual carriageway.

The road was so new she didn’t recognise it.

I screamed inside. And began to panic. And finally, switched her off.

I had no map book. I didn’t know (sad but true) whether I should be going east or west. Which made choosing a motorway a gamble.

I mentally threw the dice. And found myself at Manchester Airport, Terminal Two. Weary, but at least now I knew which way to go …

Back the way I’d come.

At last, with (almost) a feeling of joy, of coming home, I joined … the M6. And a queue. A veritable jam.

I assumed it was volume of traffic. But eventually I crawled past the cause.

Two other vehicles, one on the hard shoulder. A scatter of debris on the road. Stunned looking people standing still. And no emergency services.

It had happened very recently.

And I was lucky.

I put George Osborne – and pitchforks – out of my mind. Journeyed home calmly.

Did a little supermarket shopping. Ate a salad. Had a glass of wine.

Then, loading up the pictures from The Edge I finally felt the magic.

There’s a character in The Stone Book called Old William. Not old but deaf and never married.

I want to end with his words:

“That’s what comes of reading,” said Old William, ‘”you’re all povertiness and discontent…”

*I made the mistake of looking up, then adding up, how much George Osborne was paid (expected to be paid as they put it) for speaking engagements between September 2016 and March 2017.

The answer is £941,584 for 46.5 hours work. I didn’t include the pennies though of course look after the pennies and the pounds look after themselves as Mr Osborne no doubt needs to ensure. On top of this – and not listed – the travel and accommodation costs were paid in the majority of cases and we are talking locations from Hungary and Dubai to the USA.

The site that let me into these fury inducing statistics is here if you want to be incensed by his other ‘member’s interests’:

15 Responses to The Edge. Part II