High on a hill was a lonely …

Not a goatherd. And not so much lonely as alone.

It was the fords across the stream that did it, made me think of The Sound of Music. That and the hill. Which, to one used to the flat coast and inland marshes where we live, was a veritable mountain.

I was alone because the archaeologist is off on his travels again. To Zambia on a recce for a five-year project. His investigation into the ‘Deep Roots of Human Behaviour’  begins in earnest in July, at Victoria Falls.

Clothes lie in heaps on the floor.

Books and papers litter the house.

Dishes queue to be washed.

There’ll be a frantic tidy-and-clean before the wanderer returns. Which will wear me out. But it’s worth it for the freedom gained by boycotting routines.

Freedom to roam, for example, without practicalities intruding. Like what to eat for dinner and whether it’s in the house.  I can always eat a tin of beans (there are some in the cupboard) if I want (which I don’t).

And so, when Sunday dawned, fair and lovely – and I woke far too early – I determined to embark on my own voyage and leave the mess behind.

I won’t bore you with (another) tedious tale of sat-nav related tantrums. Instead, we’ll just arrive.

Hot, a little bothered, but already breathing deeply and smiling as I drive into the car park.

Sitting to pull on my walking boots, I see two young women, with dogs, struggling to pay the £1 parking fee by mobile phone.

I offer a coin.  ‘Just pass it on when you get a chance,’ I say, as they effuse with thanks – and their dogs drag them away.

Stands of Queen Ann’s lace tremble in the gentle breaths of the warm wind.

Buttercups beam their golden love of butter, forget-me-nots line the hamlet’s street – and the world’s too pretty to be true.

The tiny hamlet of Wycoller, in its secret valley, is a charming place on a sunny Sunday afternoon. There are people and dogs, children and ice creams.

I cross a bridge and pass the enigmatic ruin, probable inspiration for Jane Eyre’s Ferndean Hall, but don’t stop. I’ve been here before, on my ‘fan-of-anything-Brontë’ tour. 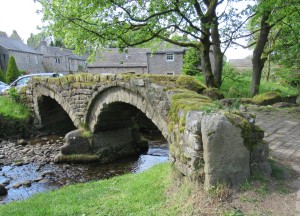 Faces, everywhere, on my lone rambles … what can it mean?

And the down side

The car-free road accompanies a stream.

I cross another stone bridge and pass through the first walker’s gate.  Head uphill, through placid sheep and lambs.

A little further along my way

Past holly, late in berry and evergreen trees with tiny, pineapple-like cones. Past whinberries, blushing pink and far from ripe. 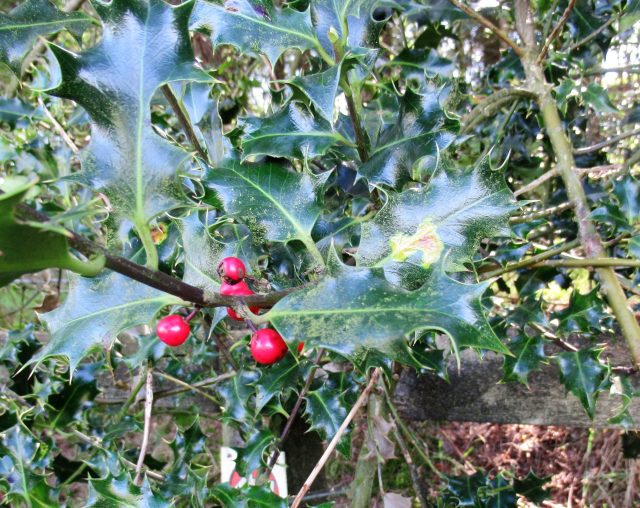 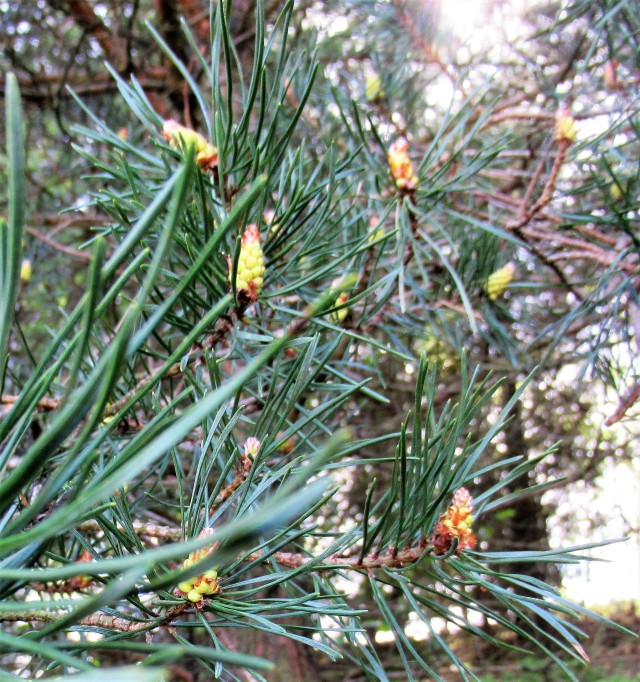 Whinberries, or bilberries depending which side of the Pennines you are on, an ephemeral, joy of a fruit I picked as a child and ate in teeth-staining dark juicy pies. Mmm! 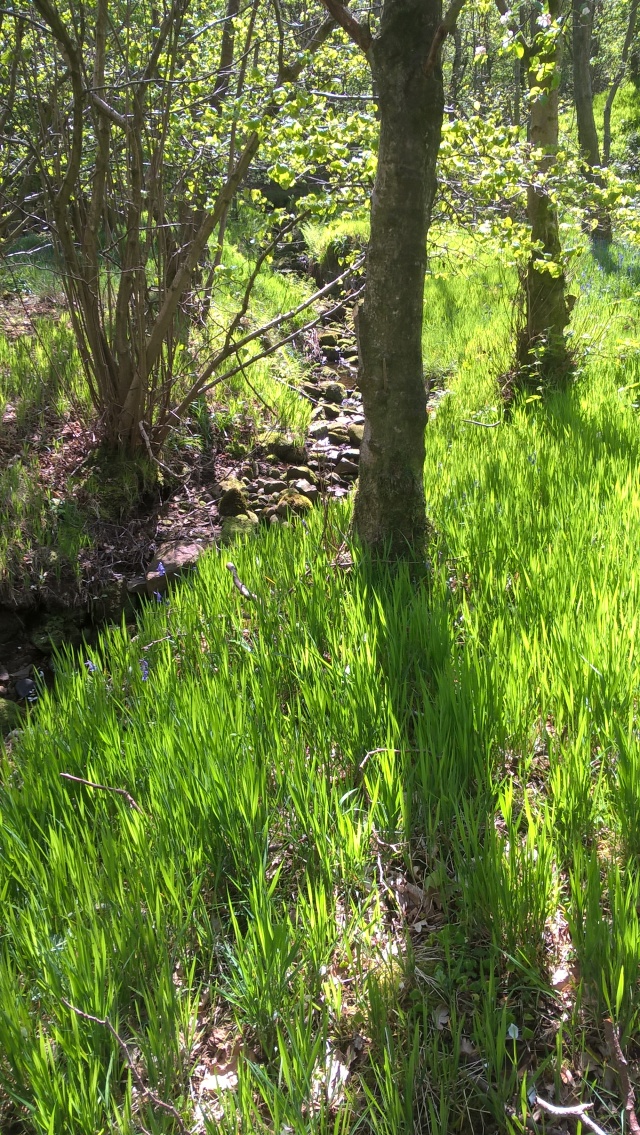 I know, I should have cropped the grass, but it looked so gorgeous. I wish you could hear that stream

Past nestling farms and lines of reeds, bursting through springy, sometime-marshy turf. 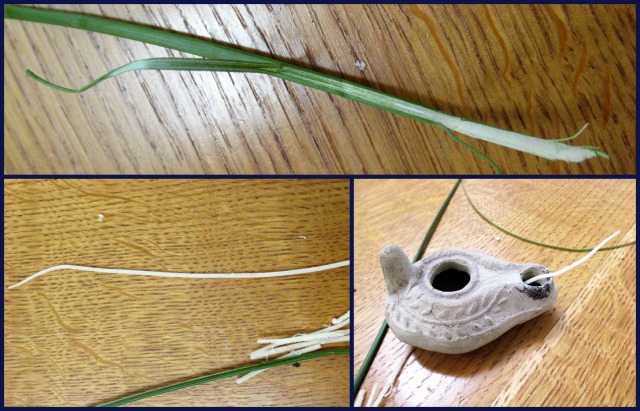 Reeds like the ones in the picture above can be used as wicks in oil lamps as I learned on a school trip.The lamp is Roman and belonged to my father

And on I plod,  ever upwards.

Past pairs of what I assume are old stone gateposts – but may be merely wall-ends. Whatever, they are, they’re sans gates.

At length I approach the top.

Breathe deeply of fresh spring air, marvelling at the majesty around me. 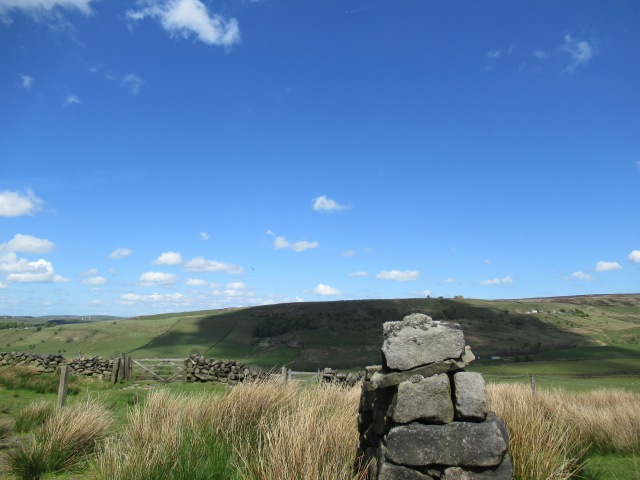 It’s there, elusive, in the distant blue of the sky

I sit on a rock. Watch as it wheels and dives with haunting, plaintive cries, entranced as it swoops by, so close I imagine I can feel the breeze of its wings. 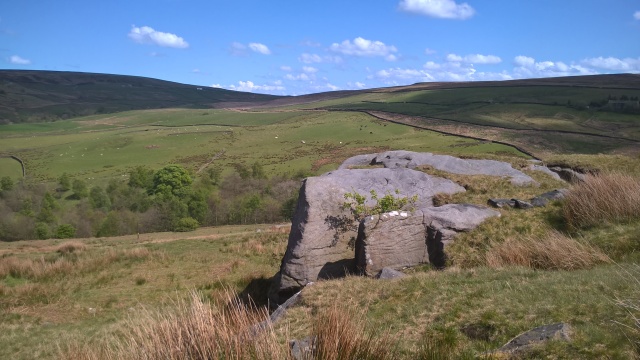 Time passes. Two young men appear and amble by. The only people I’ve seen in an hour. Soon I spy them, way downhill taking a different route back.

So ‘I leave and heave a sigh and say goodbye.’ Decide to try their route. Cross the top of the hill, then tread carefully down the steep, dusty track some non-human has made. And realise, there is no path.

I climb back up, wishing I had a walking pole.

And for my pains see solitary, wind-warped trees I missed before.

A lamb resting and a sheep asleep.

I reach a shallow ford, shaded by trees, water glistening in the dappling light.

Not very deep, but the air was frantic with darting flies and my boots not waterproof

An ancient stone bridge – too daring for one with no head for heights, wearing clumpy walking boots, with no companion to catch me if I fall.

It’s quite a high arch above the stream, trust me, scarier than it looks here!

So I don’t ford this, let alone ev’ry stream, till I find my tea 😉

No, I regain the hamlet with an alternative, staider route.

In the tearoom, my Assam comes minus milk. I ask for milk. None comes.

My beef and mustard sandwich comes without mustard. I ask for mustard. Which arrives. On second request I have milk.

The waitressing girls, dippy teenagers, are bored. Need an adding machine to fathom six plus four.

I wander back up the hill to the car park. Reluctant to leave such beauty and such peace. 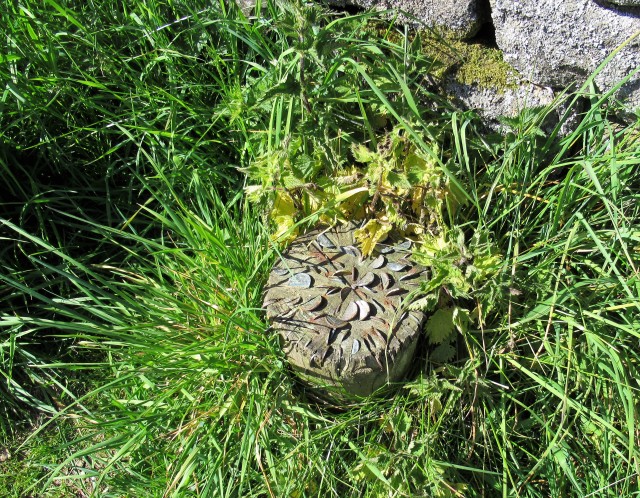 What is it? No idea. It was beside the path on my way to the carp park [fishy, that! thanks, Thel for pointing it out – I’ll just keep clam and leave it!].

I cross the empty upper section of car park, seeking the place where I thought I could opt to be buried. I was wrong. But still, it’s a place trees may be planted, in memory of love. 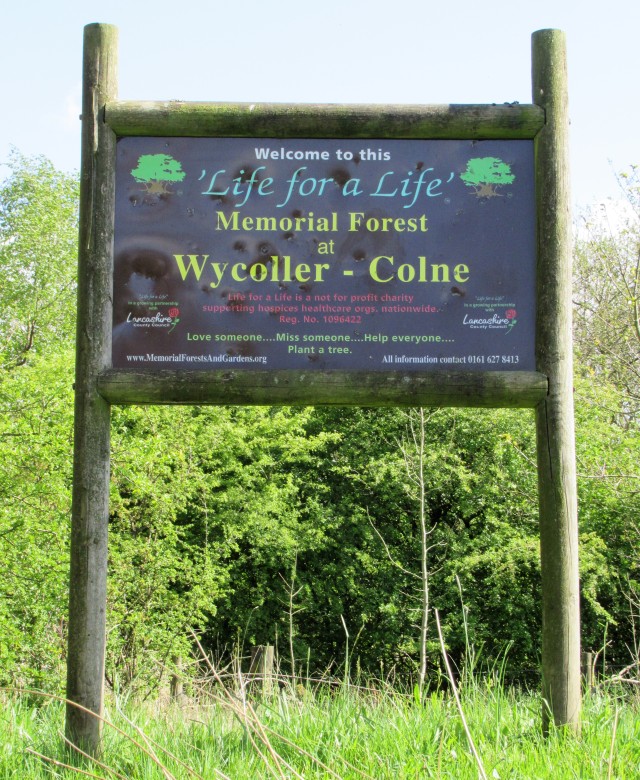 I’d like to be buried with a tree planted above me. To know that I will, as I’ve always imagined, become food for a tree after death. A weeping birch perhaps? Or a beech? Or a strong, tall, pine with pretty cones?

Whatever.  I don’t really mind.  The tree will breed, live on. As long as Nature survives.

And so, wending my way homeward, Ms Satnav plays her usual games, but I shrug and carry on. I’ve topped up my well of inner calm, a gift from Mother Nature.

I reach home well before dusk, while the world’s still warm. Sit on our little balcony. Sip a glass of cold white wine.

Retire to bed too early and pass a restless night.

In the morning, as I sit in bed reading, long after the Prof would have been at work, the windows are blurred with falling rain – and the wind blows.

Behind the clouds the sun sings,

Nature’s clocks – and my kind of time-keeping 😉

This wonderful place, Wycoller, has been owned by Lancashire County Council since 1972. It bought the land off the then water board which had decided not to flood the valley for a reservoir. It is now being divested from the county, which has faced such severe cuts to its spending from the last Conservative government that it can no longer afford such luxuries. I have written before about the world class mill-museums, our unique heritage, that are being lost. The people of Lancashire nevertheless voted in the recent local elections to have a council with a majority of Conservative members. No doubt they blamed their council not central government for the cuts. There is no fairness in this world.

Like Loading...
This entry was posted in Art, jaunts & going out, Britain now & then, Lancashire & the golf coast, Nature notes and tagged Climb every moutnain ford every stream, Ferndean Hall, Jane Eyre, Mother Nature, sheep and lambs, The Sound Of Music, views, whinberries or bilberries, Wycoller. Bookmark the permalink.

15 Responses to High on a hill was a lonely …