The Ides of March

Beware, cried the soothsayer. Or was it the East wind?

As I sit down to write this post – amid boxes of tiles, plaster dust and paint – I calculate that it’s XIII days before the Kalends of April.

I learned the old Roman (pre-Julian) calendar system of Kalends, Nones and Ides when I studied Latin at school – which I did from the age of ten to eighteen.

One of the few things I still remember is the rhyme:

In March July October May

The Nones fall on the seventh day

And the Ides on the fifteenth.

Not exactly a work of literary genius, but it stuck.

Last night, lying awake as the East wind screeched through our window – before I closed it – I could not, for the life of me, remember when the Nones fell in the other months.

I looked it up this morning. It’s the 5th.  You might not care – fair enough – but it was bugging me.

This calendar without weeks is based on the moon’s cycle and not exactly the easiest thing for twenty-first-century-types to grasp. It’s possible some nerdy classicist has designed an app for it – but I doubt it will make a fortune.

Why was I thinking about the Ides? Well, mulling over the last few days, I thought how strange they’d been. And for some reason I heard, ‘Beware the Ides of March,’ in my head. Then realised. It had just passed.

Thursday the 15th (Ides) of March was my day for meeting other lone-workers. We gather fortnightly above a cosily crowded café in a spacious room of our own (Virginia Woolf would approve). There we work and network (gossip) for a few hours, in the luxury of company.

The café’s ten miles down the road from here, in Crosby, north of Liverpool. I usually take my backpack and walk to the station – about three quarters of a mile. Watch the golf courses and pine woods speed by for twenty minutes before the next ten minute walk.

But last Thursday I felt wretched. Drained. And not wanting to stray too far from a room with a loo.

My usual lunch – the café’s nourishing soup – sounded more like punishment than reward. Instead I struggled – such a penance – through a cinnamon bun, to a slice of banana bread, washed down with loose-leaf rooibos.

By two o’clock I was cold, tired, had done no work and wanted to go home. Yes, even to the sound of drilling as the joiner worked in the echoing kitchen shell.

As I strolled towards the car, I looked up, through a spattering of fine almost-rain, and gawped.

A giant rainbow bestrode the view. From below it looked like a double rainbow, two joined together. But my pictures – taken on my phone – say it was two.

I fled for the car and home, feeling privileged to have seen such a sight.

But as I drove, the rainbow grew bolder and bigger and brighter and, seven miles later, as the dual carriageway petered out, a lazy arch spanned the entire sky.

It was an inverted smile, from the extreme left by the coast to the far right, where views of hills appear at the edge of the saturated moss.

And as I drove under it, the rainbow faded, like the Cheshire cat’s grin.

It felt as if I’d gained access to a magical kingdom – not just the nearest village and the main road to our house.

As the XV day before the Kalends of April dawned, I dragged myself into the day, ready for the joiner’s arrival.

Showered, dressed, make-up and jewellery applied (trying to make myself feel efficient and work-friendly by dressing up) I sat at the computer.

And sank my brain into London, 1977. The book, needing tweaks.

The printer of my Little Match Girl story. His elusive typesetter had emerged from an inexplicable absence and – could I get over there soonish?

I drove the eighteen miles across the squelching moss. (On the roads not the grass. It’s very wet out there, looks more like a lake than fields)

After two joyous hours spent watching and learning, marvelling at the intricate mechanical processes, I left – with my name, cast in lead, in hand.

… this beautiful waterfall of a chute then …

… into here where they meet the hot metal

Dave, who’s holding these, tells me there’s a difference between the two sets of matrices (I hope that’s right, one of the brass things is a matrix – a mould for the letter that is to be cast in lead, tin and antimony). I was wrong when I said I could see it …

But driving the high road over the sunken fields, I had to rein in my eyes, which were desperate to scan the unfolding skyscape. The ditches beside the narrow moss roads are unfenced and precipitous – concentration is essential.

A strip of sullen, sulphurous light lay over the trees, meeting the grim grey of the lowering sky. The bare branches, crackled and gnarled, festered in frustration at the slow advance of spring.

The light changed, the sun lifted the veil of grey and a smudge of starlings formed a small murmuration – and was gone.

A chance observation on an unexpected drive.

And then the sky cleared, the sun shone, the birds sang and danced their naughty spring dances. 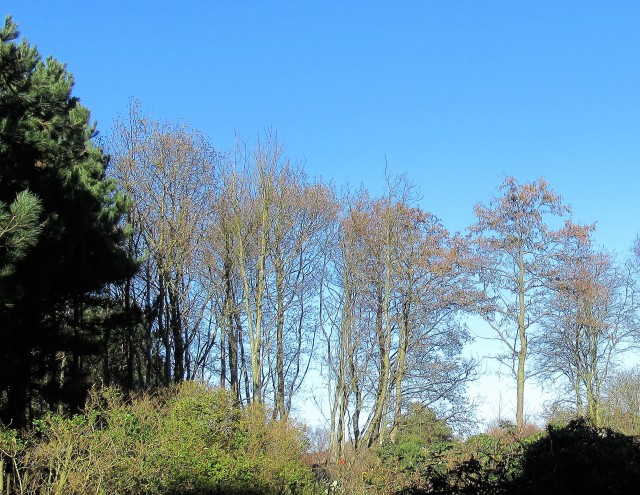 And now. Today. XIV days before the Kalends of April.

After a sleepless night, haunted by the howling, shrieking, wailing wind, (and thoughts of my partial namesake, Cathy in Wuthering Heights) the East wind blows.

And we have snow.

And, like the soothsayer, I say, ‘beware the Ides of March.’

Who knows what they may bring.

11 Responses to The Ides of March