It was a two walk weekend, after a week of only one. And that one was to the shops. With a brief diversion into the cemetery. Those angels. They need watching over.

Something about having strangers working in the house makes me want to stay in – not because I don’t trust them, I do. But it’s as if I’m in a real office with people who aren’t home from work, but people who are at work. Like me.

As a result I’ve done more work than usual and even – the prof will never believe it (he’s in Ghana) – done some filing. I can see the floor. Most of it.

But back to the walks.

The sun shone both days. I felt grateful to Nature for smiling on me. And it was good to be free.

It took a while to break the invisible chains. My metaphorical apron strings? There’s certainly lots of cleaning to do 😦

I left the house as Saturday afternoon threatened to turn to evening and returned to the local sand dunes.

Despite all the foot-and pawfall, it feels remote and quiet

It was more perfunctory this time, exercise with a little observation thrown in, rather than the other way round.

As I set out, after several cheery hellos, I thought, ‘this has to be the friendliest place to walk.’

Little did I know the extremes that friendliness would reach …

It wasn’t every dog (the Labradors abstained).

Most of them were small and their enthusiasm reached no further than my knees or thighs. And as it hadn’t rained, the paw marks – being sandy – rubbed off.

But the biggest one was big. Very big. And VERY friendly. So friendly it came close to knocking me over – just before it licked my face.

I had to laugh. I’m not a dog person, but they do have a special something. Well, some of them. 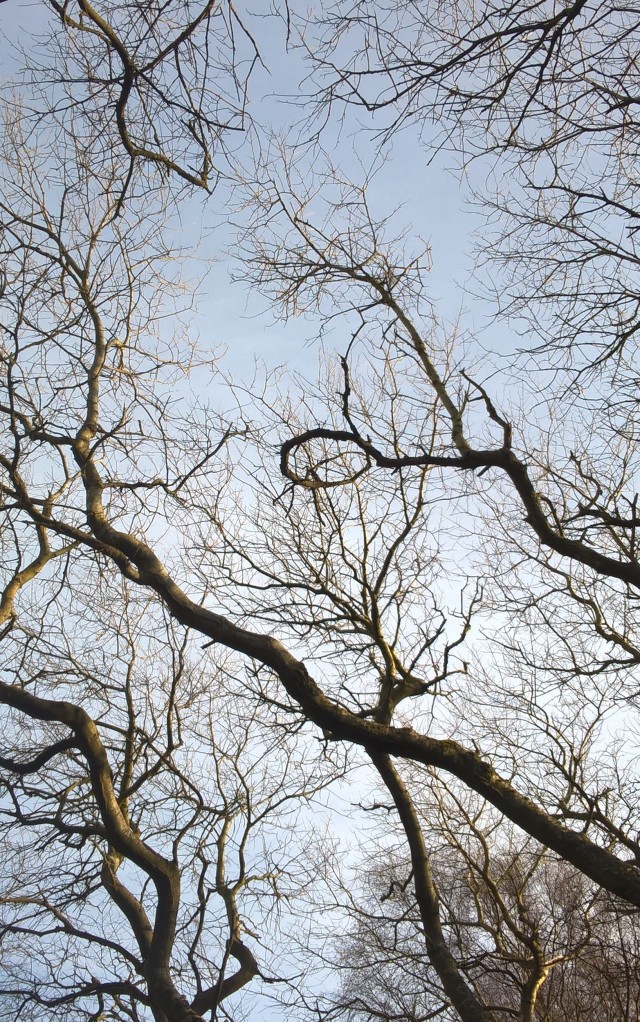 Which creatures are so tall they can play netball with this hoop? 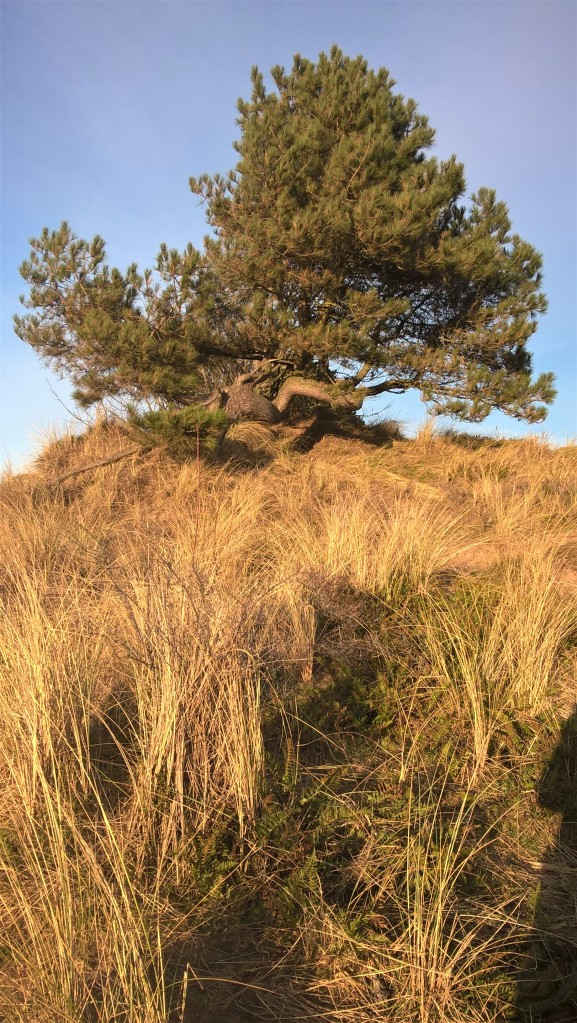 Look at the curl in that trunk! 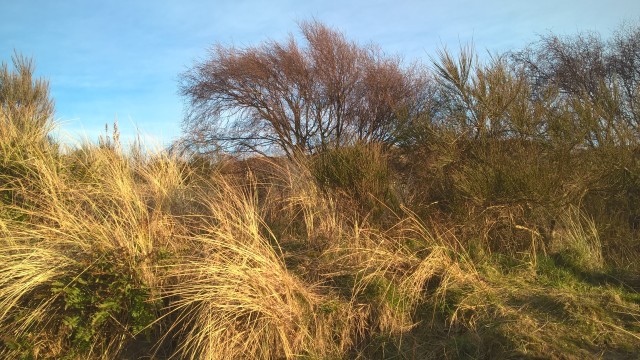 The wind section of the coastal orchestra – where’s the conductor?

That was Saturday’s walk, then, with added dogs.

It was only the dogs who were really at loggerheads at Loggerheads. Snarling and barking and fighting

You’ve probably guessed by now, Loggerheads is a place. In Wales. People go there on sunny Sundays, even when the clocks have gone forward, to walk. Some with angry dogs.

The walk was a tad more strenuous than anticipated. I knew there’d be a climb, but wasn’t quite prepared for the steepness. 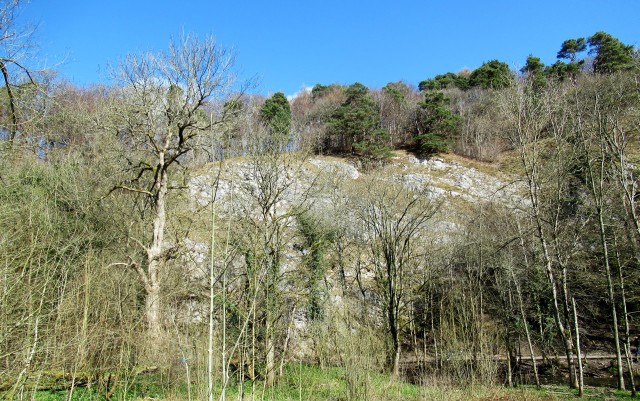 But I made it to the top.

Then spent the next mile recovering as I walked through the woods and back down along the river. 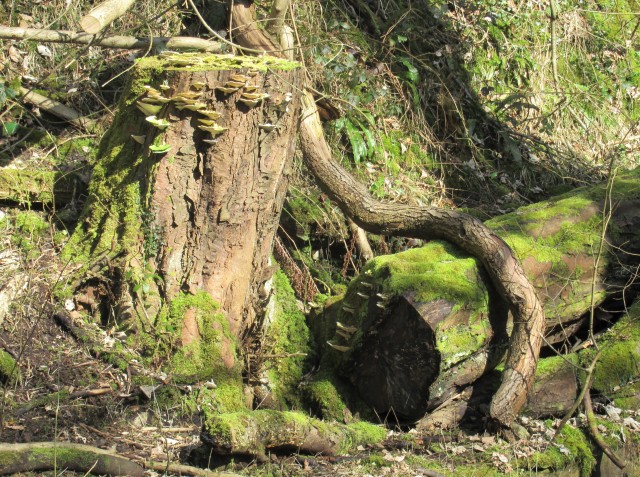 A family of lost limbs in a tree caress, as the fungi begin their work 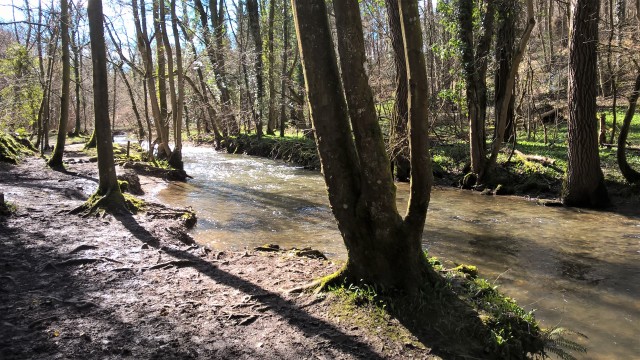 Snowdrops gone, I suspect wild garlic will be pungent soon

A reminder we’re in Wales

There are many logs at Loggerheads.

I could have been a log lady if I’d picked one up.

I was fascinated by the Log Lady in Twin Peaks.  RIP, bless her. She made such a poignant appearance in the latest series.

But I left the logs behind. 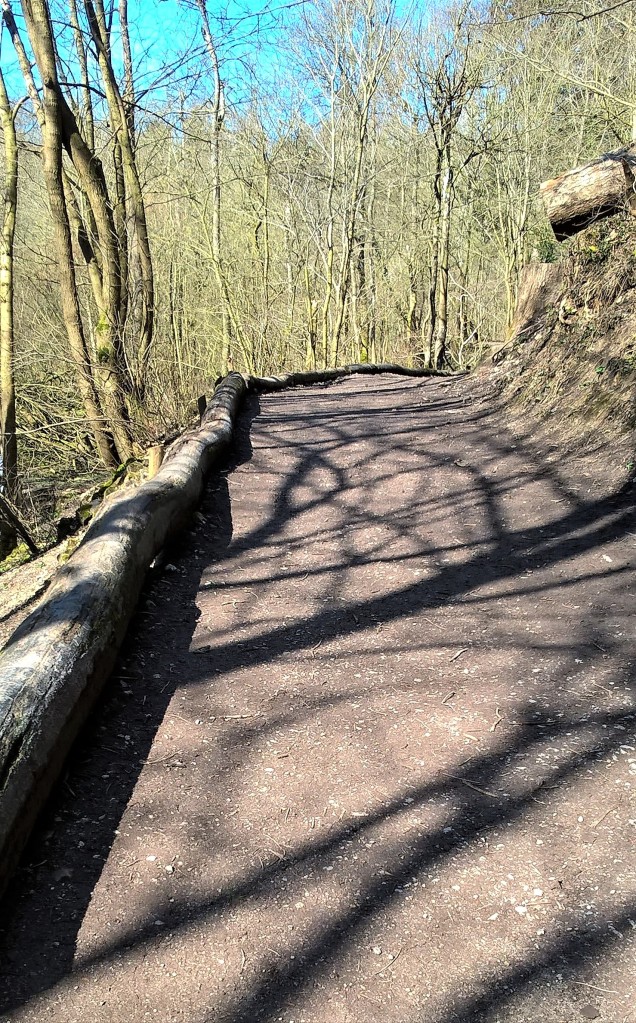 They line the paths by the river 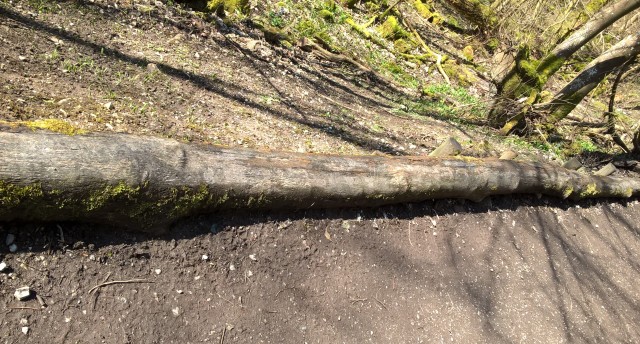 Drove on to Ruthin intending to eat, buy someone a birthday present. But the crafts were expensive and the café … I just thought, I’d rather go home. So I did.

And once home (delayed by horrendous traffic jams in my home town) I put my ready meal in the tiny, counter-top oven and set to thinking of more important things.

Two people in particular brought me back to reality from my self-indulgent introspection this weekend.

Blogging friend Ardysez wrote a post – do read it – about the #MarchForOurLives.  The song she posted had me in tears.

Then my sister-in-law sent these, from recently terrorised Austin, Texas – where she’d been on a #MarchForOurLives march.

I’m so humbled by the young people who have created this great movement.

They’ve plainly said to their government, don’t tell us you can’t, you CAN do something.

We DON’T have to allow people to buy these weapons of mass destruction.

That’s what they are – aren’t they?

Watch this, if you haven’t already. Be patient, watch it right through – you can spare six minutes, can’t you? –  and see what I mean.

This young woman stunned me. The bravery, at her age, to stand before a massive crowd and speak – but even more bravely, stand silent. And how powerful, that silence.

All of which reminded me that I – we – should pay attention to our world. Not because we can do things, always – which is what sometimes makes me turn from the news, feeling I can’t do anything.

But by supporting those who do take action – with praise, funds, our voices whenever we can use them – that’s better than doing nothing. If we all shout, the people who can do something will eventually hear – and recognise a voter’s anger.

Though there are those, like Old Jules, who take a more cycnical view.*

*[Edit: in my haste to add his interesting views, I did misrepresent Old Jules – see his comment below. ]

But I’m eschewing cynical. And writing in Britain, where guns – and death by gun – are rare, I’ve always been appalled by the USA’s NRA.

No citizen needs an assault weapon.

It’s time to call time on the casual acceptance of mass murdering wepaons by adults who should know better. It’s as simple as that.

I’ll get back to coherent, thought-through posts one day.