It’s been a very long time. Not since the mid-1990s in fact. And that was at a small, rural sewage treatment works in Wiltshire.

Rural sewage treatment works tend to be havens for wildlife – and also quiet, hard to find (no sat navs then) and occasionally it’s only possible to depart by reversing down winding, hedge-blinkered, narrow lanes.

In days of yore, figs and tomatoes often grew at rural works, thanks to processes of nature we can all imagine. And before the days when time was money, some of the men who worked the works grew fruit and vegetables with duly aged ‘manure.’

But what I experienced in Wiltshire that memorable day was not the sight of a rare flower (as there are at some sites), nor of a small, rare four-legged animal (ditto) but a sound. The sound of an elusive creature I could not see.

Yesterday, somewhat depressed, as seems to be my fate these last few weeks (don’t mention the kitchen) I took myself out to the local sand dunes, adjoining Royal Birkdale Golf Club.

We’re lucky here, the entire coastal fringe of Sefton is protected as a Site of Special Scientific Interest – an SSSI.  For which we partly have our famous links golf courses  to thank, for keeping them unbuilt-upon.

The afternoon was moving on to evening, but still the spring sun poured warm libations onto my head as I strode past windswept trees and into the warm, grass covered mounds. 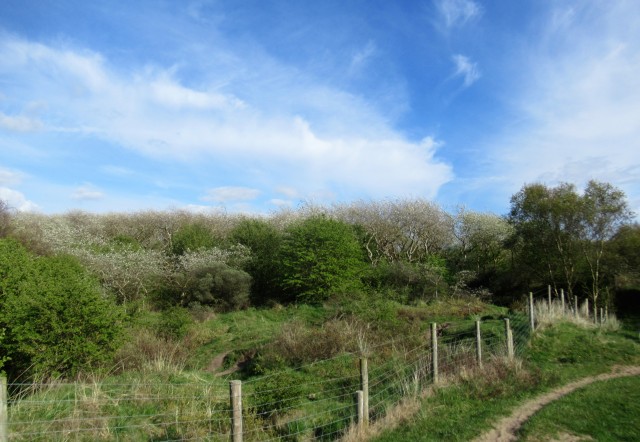 The sand was soft and golden underfoot. Walking was hard work. But the world was beautiful.

Bluebells danced their tethered dance, dappled through trees with leaves unfurling fresh and lush with sap.

Then I reached a place where no-one was. No dogs. No people. Just trilling birds, stands of gorse emitting waves of sharp, coconut-like scent. And me.

And then came a sound.

A word of fear, “unpleasing to a married ear.”

I thought it would be a fleeting call – that it would stop the instant I heard it, But no.

And I was back in the parquet-floored assembly hall of St Cuthbert’s Junior School, Bradford. Singing:

“When daisies pied and violets blue

And ladies smocks all silver white

And cuckoo buds of yellow hue

Do paint the meadows with delight,

The cuckoo then, on every tree,

For thus sings he,

Unpleasing to a married ear.”

And I was happy.

But even better, the invisible singer cuckooed on.

I lifted the little red picture machine clasped in my hand, pressed ‘record’ – and hoped for the best.

Which is why, today I can share my burst of joy with you all.

Happy May day, one and all.