It was raining. Hard.

My new friends had driven me into Haworth for the evening from the refurbished cotton mill where I was staying.

Nestled between two ponds in a lush, tranquil valley, it was the perfect place for me to sojourn solo – and reflect. Until I heard the ghost stories.

That night we were celebrating Emily Bronte’s 200th birthday, at the third of four evening events, with Lily Cole – the supermodel of the title. And the reason I was there at all.

It began when a writer called Nick Holland, who has written about the Brontes (as well as a tortoise – and A Girl on a Bus), resigned over the Bronte Society’s appointment of Ms Cole as Creative Partner for Emily’s birthday year.

‘… what should have been a joyous year with genius at its centre has instead become a rank farce with the news that their creative partner for 2018 is Lily Cole,’ wrote Holland.

He rubbished her new vocation, ‘social entrepreneur (whatever that is),’ and, coincidentally (see evening four and my faux pas) once saw her in a play, ‘the only one I have ever walked out of at the interval.’

Now, I have a bit of a thing about the Brontes, what with being an Earnshaw and having lived in Thornton where the creative four were born.

What better way to express my approval of this adventurous appointment, then, than by joining?

So I did. And here I was. For a showing (not the premiere, which happened later [!] in London) of a film created and co-written (with Stacey Gregg) by Lily Cole. Who is always identified, in the media, as ‘supermodel’ or, ‘former supermodel,’ whatever she now may do.

The film was short and moving.

Made with the Foundling Hospital of London, it was inspired by Heathcliff, the foundling boy given a home by Mr Earnshaw in Wuthering Heights. (Though Heathcliff hailed from Liverpool, not London.)

Ms Cole – among other things a double-first degree holder from Cambridge – chose to feature the heart-rending system the hospital used to select babies: balls.*

*(Which is also the title of the film.)

Mothers took a ball from a bag. Those who took a white ball went to the next stage – a check on their infants’ health.

Those who selected a red ball were back-up.

I won’t divulge the rest.

An interesting discussion followed and for me the other star of the evening was the lovely, Tia Bannon, who played one of the mothers.

Her smile lit up the room.

But panel discussions aren’t really my thing – and the real reason I’d booked myself in for the entire weekend was The Unthanks. Appearing on evening four.

Now, if Emily would have been upset about Lily Cole (would she?), I wonder how she would have felt about The Unthanks?

At least they didn’t do any clog dancing, which I’m pretty sure she would have frowned upon in such a couth setting (a marquee, with gin and wine bar, in a field, on a mild summer evening).

But really, who knows?

She may have revelled in it. After all, she was a writer.

Anyway. I love the Unthanks.

The evening was soft after the rain, the pale marquee cocooned in opalescent, summery twilight.

The Scottish man turned out to be a great conversationalist, not really obsessed with his phone, when he joined me (on the right) – and made a nice silhouette (on the left) before that! 😉

The group’s setting of one of Emily’s poems was gentle, lullaby-like. Words swaddled in the evening’s embrace, gently rocked in a musical cradle.

Sadness, pain, misery and beauty are, for me, their hallmarks. They sing about tragic matters so hauntingly you can’t help but listen. But as an overly empathetic person I often find myself torn apart by their songs.

We saw them, years go now, in Liverpool. And had to leave at the interval, I was so convulsed with angst.

Now, this isn’t the kind of thing you tell artists, is it?

Love your books – but never get past chapter one.

I like your paintings – but can’t bear to look at them.

Enjoy your music – but left at the interval…

Of course, I did.

Afterwards my new friends drove me back to t’mill, leaving me with a sparkler to light for Emily’s anniversary. 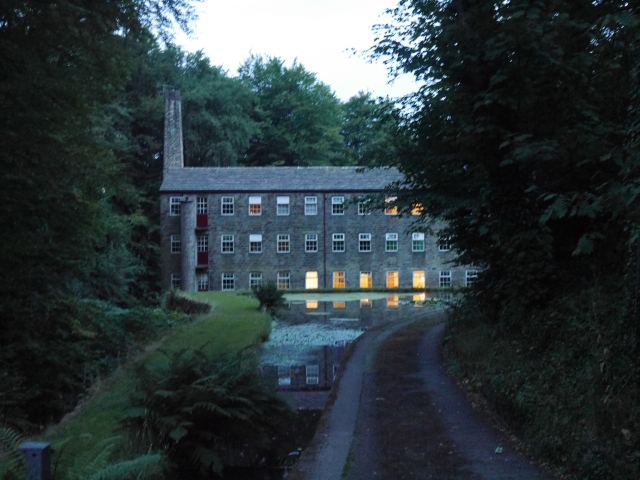 Homing in the grey, post crepuscular light to Bent’s Mill

I stayed on a few extra nights after they left, having not done the writing I hoped would trickle out.

But there were other things ahead, perhaps more important in my life’s eye.

A school friend I hadn’t seen for thirty years.

A dear man who taught at my father’s school, his wife who taught me French. 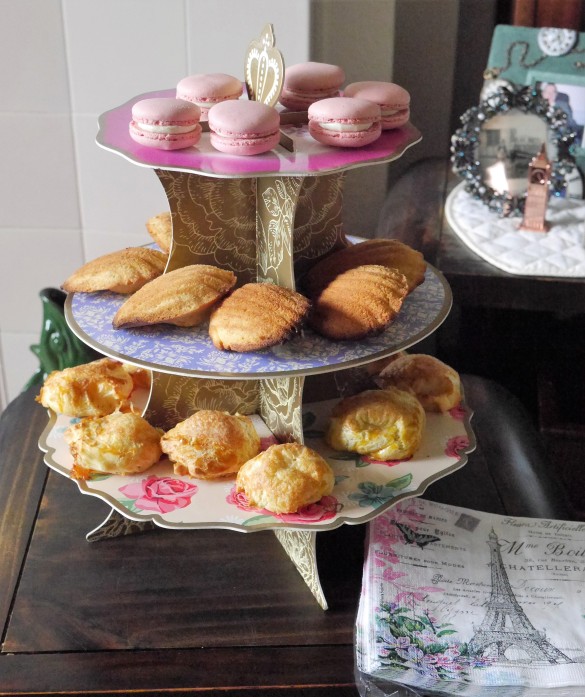 French themed afternoon tea – my old French teacher turns out to be a great baker – madeleines and gougeres home made!

A friend from university.

And – the new Hockney gallery in Bradford’s Cartwright Hall.

I wasn’t sure about that, was veering towards disappointment. But then …

I entered the mock-up of his studio.

With a jolt, a memory returned.

For a brief spell we lived near Cartwright Hall. I toiled uphill every weekday to school. Past Lister’s Mill, still weaving, escaped fibre-fairies floating on the air.

At weekends, in Lister Park, I roller-skated and visited Cartwright Hall.

My memory paints it cold. Sees fossils and stones.

But there, in his recreated studio, was a glass case of stuffed birds.

Images came flooding back. Those birds, drawn by young Hockney were the same ones seen by little me, years later, amid the fossils and stones.

How many keys are hidden around our worlds, waiting to set them free?

It was a time, my week of exploration, of remembering. Of creating a well of new images to mix in with the old.

And now, at last, thanks to them all, new inspiration, fizzing away in my brain.

8 Responses to Supermodel, with Balls