Up she rises, earl-eye in the morning. One Sunday in May.

Posted on June 1, 2013 by memoirsofahusk

Amazing what the sun brings out, my parents would say. Like spots. Though it’s possible they actually said pimples.

Does anyone say pimples any more?

Religion is like a moral sun for me. It brings out my worst fears, agonies, shame, embarrassment – and guilt. I try and squash it most of the time but when you’re there, in church, beating your breast, accepting it’s not just your fault but your most grievous fault – well, it’s only natural, isn’t it?

Sunday dawns fair. Very fair. Warm too. It’s most peculiar. We’ve become so accustomed to this endless dour, miserable, mean, sneaky winter that we’re not quite sure about a heat that owes nothing to the gas boiler.

It’s lifted my spirits. Even waking early doesn’t bother me. I skip through the main section of the newspaper, impatient with the world.

Sort yourself out, foreign countries.

Don’t be so pathetic, celebrities.

And as for the magazines – HOW MUCH?!

Atheist-man finds it hard to assimilate, this cheery-morning side to me.

I’m standing in the hall with my keys, doors open, setting the alarm.

‘I’m not ready!’ he splutters.

I unset it, step outside and turn my face to the blue heavens with never a thought – I’m sorry – of God.

It’s unprecedented. We’re early enough to choose a different pew. And find the page before the singing starts.

Old fashioned hymns today. Comforting and sing-able. John Henry Newman and the like.

And a sung Latin Mass. I find the words in the Mass book for Atheist-man – he keeps looking questions at me – like giving a child a colouring book to keep him quiet.

The lessons are about the early church. Sounds dull, doesn’t it? But some tantalising things pop out. Followers of Christ don’t have to be circumcised any more – but they mustn’t eat meat that’s been strangled to death.

The priest in his sermon returns to a theme I find difficult – and he does too, I suspect. Pain, sorrow, misery in this world.

It’s all here today in the person of one sad soul. There may be many more unhappy creatures in the crowd, but I happen to know this one – let’s call him Anthony.

The first time I crossed the threshold of this church – and the reason I chose it for this experiment (as well as the 11.30 Mass, designed for sloths like me) –  was for a funeral.

I’d been living here for a couple of years and after a string of  tonsorial disasters (razor cut, anyone?) found a brilliant hairdresser. Brilliant, but – I suspect – mad.

Over weeks, months, he unravelled before my eyes.

The last time he coiffed me I washed my hair and drove round to his flat. I waited patiently as he stood before the mirror draped only in a bath towel, showing just a tiny, calculated amount of bottom cleavage.

Fear not, his boyfriend, Anthony, is about to arrive.

Both men are devout. Church-going. Crucifixes are in evidence – and a statue of Our Lady.

A couple of weeks later my hairdresser was dead.

His funeral was a beautiful affair, as befitted an artist. A sculptor in three dimensions of human hair.

I see Anthony now and again. At first he was as before, just a little less present. But now he’s very much less present. He’s grey. Like a lost soul. Paralysed on one side. He limps, drags himself along like a victim of some terrible catastrophe – and that may be the truth of it.

His chest is hung with a large, full crucifix. His clothes are all biker black, like penitential robes, updated for the 21st century.

There’s no real recognition in his eyes. He looks at me and somewhere in the depths of his brain he places me.

A ghost of a smile – or did I imagine it?

He’s already looked away. Back to his prayers. To pain, sorrow and misery.

But still he prays. That’s hope, I suppose.

We leave the church and the brilliance of the day bleaches the greyness from my mind.

Down at the docks, the heat of the sun is unnerving. We wander, dazed, along the bank of the Mersey, past the grandeur of the three graces to the new Museum of Liverpool. It’s a sea shanty Sunday and in no time at all we’re joining in with ‘Hooray and up she rises’ – even though it’s not at all earl-eye in the morning. 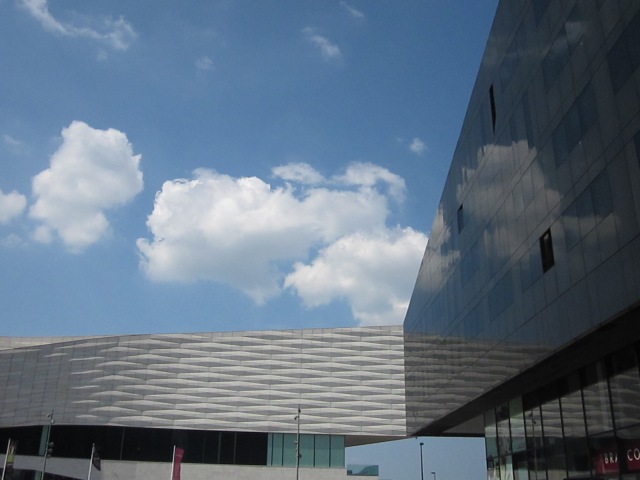 Two sing-alongs on one Sunday.

Could winter be over, at last?

10 Responses to Up she rises, earl-eye in the morning. One Sunday in May.