Posted on September 18, 2014 by memoirsofahusk

This one says, ‘Saxon church’.

We’re on holiday, not in a hurry. Tired – but intrigued enough to make the turn.

It’s been a day of surprises, beginning with this morning …

Mist lingers in the warm air of the Indian Summer. Cresting a hill we find ourselves driving through glorious, dramatic, English countryside – and this on a road from one major industrial city to another.

Not what we expected, in our ignorance.

A bridge we need to cross is closed and we’re soon lost in a mess of semi-industrial, semi-rural roads. I blame the map. It’s such a tiny scale that I can’t tell where we are half the time. But eventually we pull into a small car park – and into our second surprise of the day.

The Chillingham bull, from the Bewick Society website gallery

Because, as we step into the garden, time slips.

Gone are the noisy roads, the industrial estates and lorries. We’re in Bewick’s world.

His trees, his fields, his ox.

Bewick’s birds are famous, but his rural scenes are gems. Usually, something obvious is happening in the foreground – but look carefully and there’s often something odd going on in the background.

And so it is when, on our way back, we take that brown-signed detour.

As we follow the minor road it feels less and less like the kind of place we’re likely to find an ancient church.

Pretty countryside, mostly, but the villages are real, if you know what I mean. Not second-home charming.

Rural beauty. Towns and cities brimming with historic interest. But also a place of industry. Where mining was maybe not king, but certainly a VIP.

And these villages speak of decline.

So where do people work, now? Or do they? How many call-centres are there in the rural north east?

At last we reach the village.

We’re both feeling dubious. It’s tried its best, is almost pretty as we descend the house-lined hill. But it becomes visibly less affluent the further we go.

And there it is.

Darkened stone. Taller than expected. Set within a graveyard, a wall and a locked iron gate. 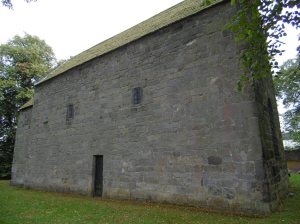 The church is on a kind of island – the road circles round it before returning up the hill.

A large, attractive pub, the Saxon Arms, stands on one corner, a little higher up in the world.

Round the back of the church, a strip of small, 1960s terraced houses lines the far side of the road.

A notice on the church gate tells us the key’s at number 28.

Within a few minutes the padlock’s off the gate. On the second attempt we manage to unlock the church door and we’re inside, with timed lights for illumination that project eerie stars on the walls.

It’s not just the height – or the remains of wall painting, or the whitewash. It’s not the Roman stones or the engraving of the cross. I don’t know – it just feels different.

Possibly the oldest Saxon church in England, at around AD 675, it was nearly lost. The village had a new, Victorian church, up the hill. But one man rallied to the defence of the decaying Saxon edifice, managed to restore it, enlist locals in its maintenance – and the ‘modern’ upstart was demolished.

The village itself was ‘remodelled’ in the 1960s.

I’ll leave the pictures from the church to speak for themselves – I’m just flummoxed by that remodelled village. Of which I take no pictures.

A woman and her dog, the key-holders, live at number 28. The dog, she says, likes to sit and watch the world go by.

Judging by the church guest book, she’s watched quite a few adventurous souls trek by. Most recently, from Scandinavia, Germany, Canada. And I wonder – what did they think of this place?

Accumulated experiences can, I know, coalesce and emerge as prejudices. And I do tend to assume things, despite finding out, time and again, that I’m wrong.

But I suspect some of the first people to live in that terrace of houses bought their homes off local councils in the boom times. And perhaps, more recently, lived to regret it.

One house, a couple of doors down from where the dog sits world-watching,  boasts a ‘sold’ sign. On my return I check it out on a property website.

Before I tell you what I discovered, there’s something important you need to know.

Average house prices in July 2014* were:

The three-bedroomed house by the Saxon church, in north-east England, sold, this year, for

But I don’t have the resources – or the expertise.

I could take a stab at it. Changing tides of employment, the banking crisis, mis-sold mortgages, legacy of Thatcher’s council house sell-off. A repossession.

But I don’t really know.

It’s all about value, I realise – but whose? And why such vast discrepancies?

Heritage is a powerful force in modern, western lives. One reason why we have brown signs, to direct us to the art, the architecture, the heritage we value.

We found a Saxon church. We found a case of shocking inequality. They’re everywhere. They are our heritage, too.

It’s time some politicians took the long trek north and noticed the signs. There are plenty.

7 Responses to It’s a sign. But what does it mean?