Between Vigo and Porto ours sits in a station while the minutes die, never to return.

Eventually a train coming in the opposite direction crosses the one-track bridge.

We resume our journey.

We’re changing trains at Porto and it looks like we won’t make it. We’re running really, really late.

It’s distracting. Before, we were landscape-watching. Glimpsing rural churches, guessing what small towns were like as we clickety-clacked past.

Less of the, ‘oh, look at that,’ more, ‘there must be several trains a day to Lisbon, mustn’t there?’.

But as we whizz through yet another small station, past another red-brick chimney, another defunct ceramics factory with an elaborate façade but a roof falling in, another olive grove, another vineyard, the observant one says,

‘Did you see that station clock?’

I didn’t – but keep alert for the next one.

The landscape changes with Portugal. Small-scale, self-sufficient-sized farms give way to larger, commercial fields of crops – and a few new ceramics factories.

‘Yes!’ I hiss as I catch sight of the next clock-watch.

We’ve stepped back in time.

Over an hour ago we were anticipating ten watch, now – it’s ten watch all over again.

We’ve become younger by one hour.

And so we relax. Change at Porto. Make it to Lisbon.

Lisboa Oriente station is magnificent. There’s an Olympic-sized leap to reach the platform, but then – look up. Wow!

You can just see the glass brick lift

A soaring vaulted roof, a glass brick lift for those prepared to wait. And below the tracks, flying concrete arches, shops, a book fair – yet another, they’ve been everywhere in Galicia – and our taxi.

It was unfair to leave Lisbon till last.

Only one full day.

And we’re approaching a state of tourism stupor. Lovely. Fab. Let’s have a siesta.

Our tour company upgraded us to a 5* hotel – and it’s oh-so-soothing. Right in the heart of things, but with a welcome breezy roof terrace in this overheated city. And such perfect service it makes the world feel good.

We gawp at the Metro station across the road. At a nearby former theatre, now an apartment block with a swimming pool on top and a forest growing from its middle.

We discover the beautiful tessellated pavements are slippery as ice.

Scorched by the day – and the wait for a tram that never comes – we still notice a few odd things, like the grand lift that rises up amid the shops.

But the heat calls for strong measures. We sit with a cold beer gazing on the castle we never quite visit. The sum of our tourist endeavour for the night.

Dinner isn’t cheap. But it’s beautiful. Not, to be fair, my favourite meal of the trip, good though it is. Was that the hake at the beach? Or the pulpo in A Coruña? The calamari in Vigo? Or just the cheeses and hams in Pontevedra?

Octopus – as if you couldn’t guess

Heaven. The blue stuff is lemon and basil sorbet

Whatever. It’s a work of culinary art.

The waiter couldn’t be more sensitive to our needs – with the exception of the regional wine he selects – delicious, yes, but 14.5% alcohol.

We succumb – and sleep a little restlessly for it. Or was it the basil and lemon ice cream with the … never mind, it was all delicious. 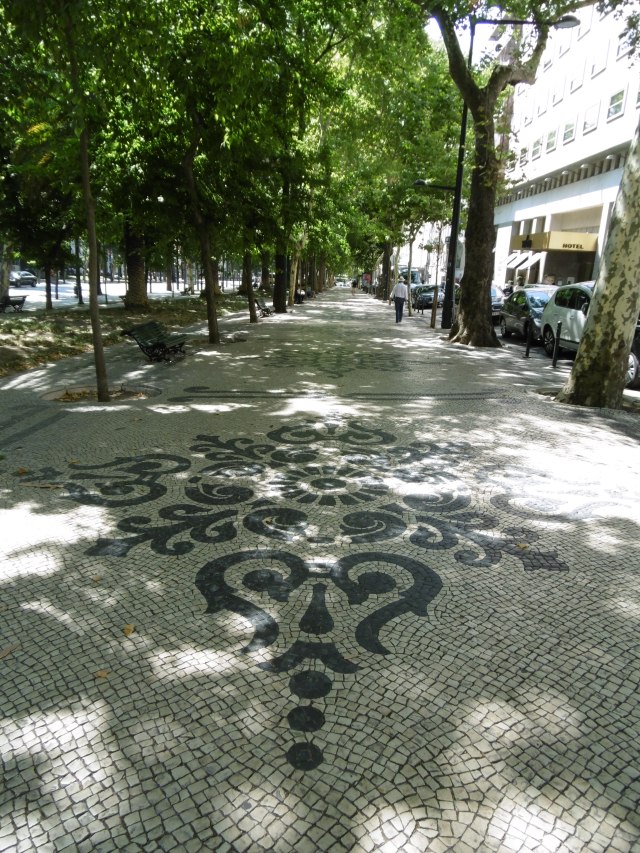 The day starts well. A relaxed walk towards our only goal – the museum of natural science. Walking beneath rustling trees which muffle the traffic.

We miss our turn.

Retracing our steps we still can’t find it.

Hot, thirsty, grumpy (that’s me) we finally seek help and a kind man directs us.

Atop the first flight of steps – check out the graffiti 😉

I knew it would be up that hill. And probably up those steps. But there’s another set of steps beyond that. Terrific.

We’ve just passed a picture of Mother Teresa when, on reaching the first set of steps, a sad sight greets us. A young man tries to rouse a figure lying shrouded in a blanket, a pair of crutches by ‘its’ side (we can’t tell whether it’s male or female). His partner phones for an ambulance.

We leave them doing what they can while the painter busy covering-up graffiti returns to his endless labours.

And finally reach the museum.

Was it worth the trouble? Not entirely. It turns out there’s none of the geology someone was seeking. There’s a separate geology museum, down such a steep hill lined with slippery marble that we abandon all geological aspirations.

Lunch makes up for it.

Not where we had lunch

Where we had lunch

At the bottom of this staircase

Under this chandelier made of …

We catch a tram – at last – back to town and buy expensive tickets for the red one that tours the city sights.

Not the right tram 😦

A cheaper evening meal of cheese and breads behind us, we sleep fitfully – a sense of failure lurking – in my mind at least.

Rising early, I peer out of our window.

And so before we leave stunning, entrancing Lisbon, we rise above the city. Watch the boats on the Tagus River and the planes landing at the airport, barely skimming the tops of the buildings. 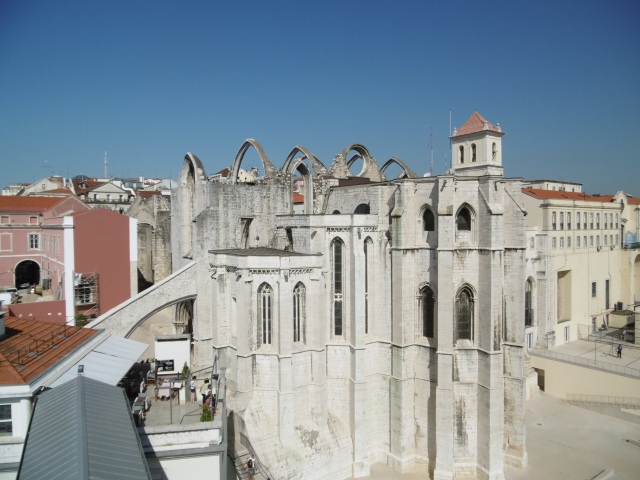 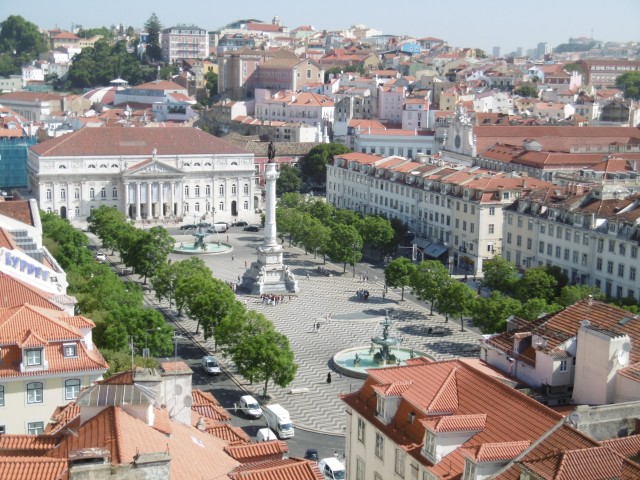 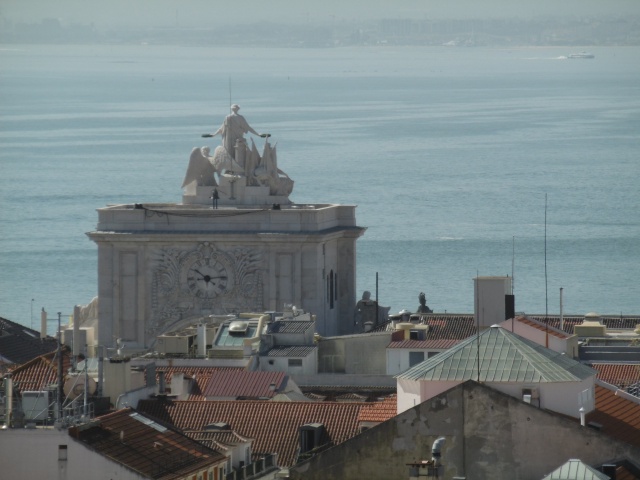 And with another wonderful breakfast in our full holiday tums, we say end our first real holiday since 1997.

I could make a habit of this …