It wasn’t a dawn chorus, it was a cacophony. And it went on, and on, and on.

The lambs joined in.

Then we heard the clippety-clop.

Clutching my camera, I leaned through the tiny window, in the thick stone wall, of the old farmhouse that’s now an inn. An unusual inn…

‘Good morning to you,’ replied the passing stranger, ‘how are you?’

’I’m very fine,’ he responded with the biggest, sunniest smile you’ve ever seen, ‘I’m on holiday.’

A flat cap on his head, greying moustache on his upper lip. A spring in his step and a twinkle in his eyes, the gypsy was walking beside a horse pulling an old-fashioned, brightly-decorated gypsy caravan. Looking barely big enough for a man his size.

But I doubt he lives in it year round. For this is a special time of year. When gypsies head to Appleby-in-Westmorland. For the Horse Fair.

He did smile a big beaming smile right after I took this, honest!

The day before we’d passed one or two caravans, seen several settled for the night on verges, their handsome, tethered horses munching lush, unmown grass.

We’d spent the night in Lancashire. The witching part.

On the way I took the prof for ‘my’ walk at Wycoller.

In just three weeks change was visible everywhere. Trees still putting out leaves were  dressed in creamy blossom, whinberries all gone and lambs well past gambolling.

Last visit in the sunshine

Spot the difference (no, not just the weather)

As a light rain fell we drove on – to what was meant to be a treat. A ‘boutique’ style pub near the foot of Pendle Hill.

The hamlet of Barley itself was a gem. A walk we took (while our noisy room and bathroom minus mirror was readied) was pretty with gleaming buttercups, a chuckling river, stone cottages and an old mill chimney.

The hamlet’s other pub, the Pendle Inn, was where we should have stayed. Full of locals reading papers and supping pints. Dogs curled patiently at feet.

No thin boutique veneer, just homespun comfort. And not £2 for half a pint of beer…

Breakfasted, bill reluctantly paid, we decided against climbing Pendle (500 metres) on such a sunny morning.

That’s Pendle in the background

Instead we took a road unsuited to motor vehicles. Upwards, past two reservoirs. Through scented woods to a promised – and impressive – sculpture trail. 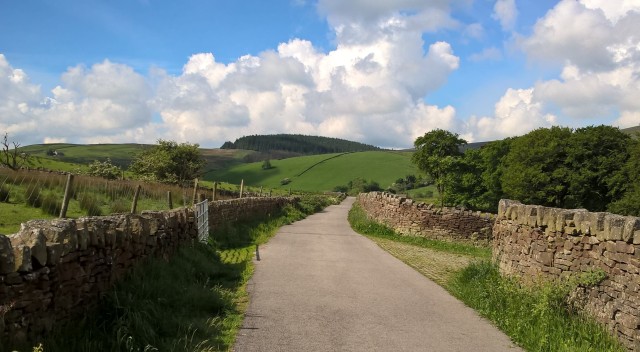 Not far into the walk, looking back down a long-ish but gentle hill… so far 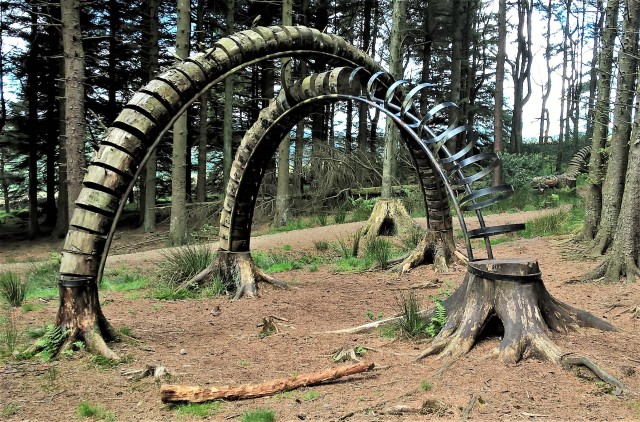 Trees and a dry stone wall my favourite of the sculptures

A reminder of the ‘witches’ who lived hereabouts

Beyond the trees, the summit was broad and high.  To one side Pendle loomed, its mood constantly changing as the clouds sped by.

To another, distant ‘civilisation’.  And a total surprise.

Something I’ve never seen. Hard to capture with a camera’s little eye. 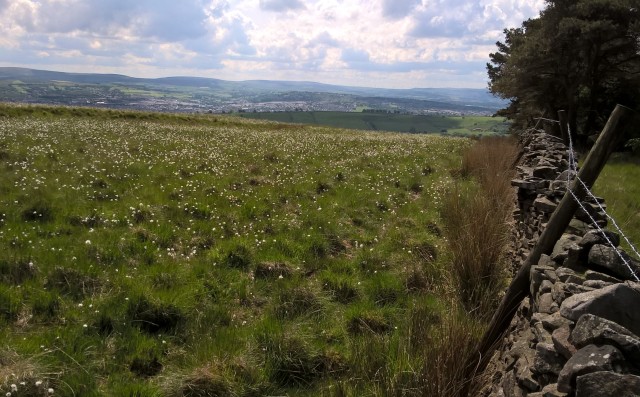 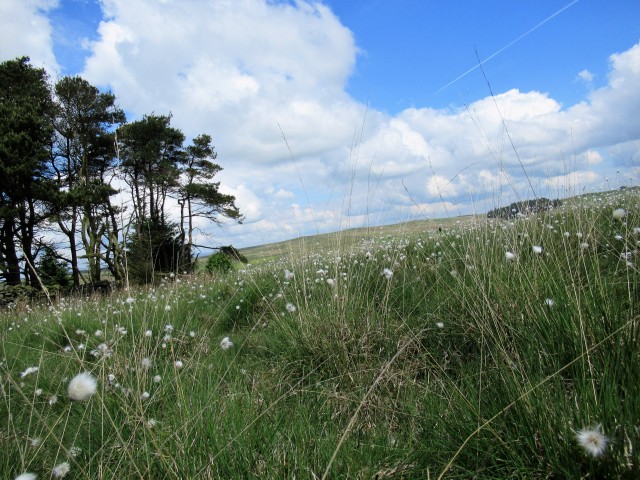 But earthly time moved us on.

Another treat lay in store, in a county not far away.

An old house, knot garden, café. And a museum worth more time than we gave it.

The story of the sad Lancashire witches – and a find. My family name on an old map of Lancashire Catholic recusants, created for persecution purposes. 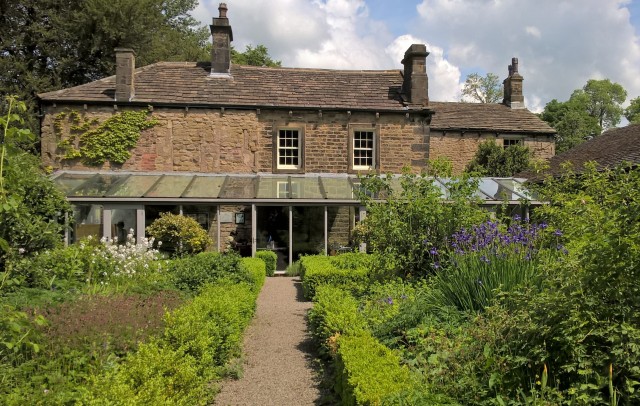 Pendle Heritage Centre, Barrowford, originally home to the Bannister family as in Roger Bannister the runner. We ate lunch looking out over this herb garden buzzing with bees

Back on the road, we began to see gypsies.

A rare treat of a spectacle. 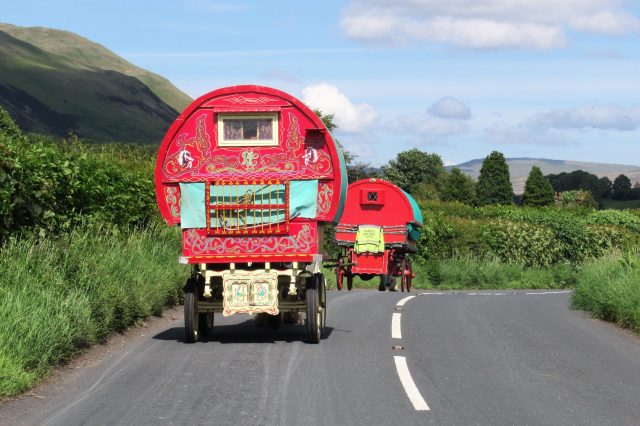 The strangeness of human-drawn boundaries.

And at last, reaching our destination, we sat, awestruck. Sipping tea and eating cake. Gawping at the natural melodrama playing before us.

View from the back of the inn

Down the gash in the distant hills a waterfall fell. Our genial, round-ish host, a Quaker man of cheery countenance and country clothing, asked if we planned to walk.

‘I predicted rain today,’ he said. ‘half past five, I reckon,’

The woman of the house, our chef for the evening, came in search of the cat.

‘Come on,’ she grasped it firmly, ‘you’ve work to do, I think we’ve a mouse in the kitchen.’

At half past four we decided to risk it.

Crossed a bridge over a gentle river. 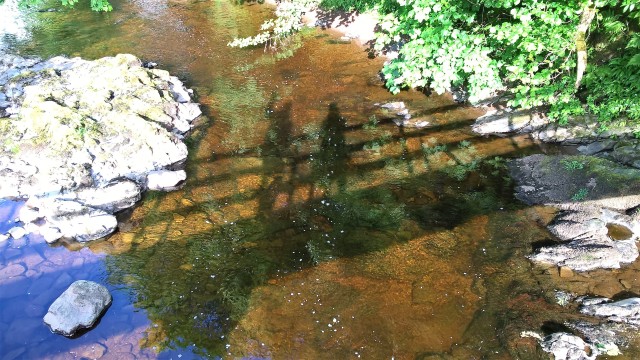 A promised Iron Age site proved hard to fathom. There’d been a pathway to the – possibly ritual – waterfall. Were the rocks either side of the path a gateway?

Looking forward to the darkness…

… looking back, to the light

Passing through the gatekeeper stones, the wind began to pick up.

Grey clouds swept in. We pressed on through a light scattering of raindrops.

Looking back on stupendous views, changing with the passing cloud, we felt as if we were alone in all creation.

More than once a forceful wind pushed me backwards.

As soon as we turned for home, the wind dropped and the sun appeared. 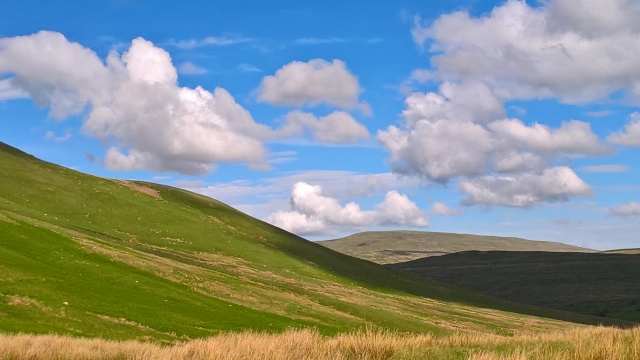 But the most stunning thing of all about this walk was, that all this land, this magnificence, is ours.

We don’t own it. But there are no walls, no hedges, no fences. It was never enclosed.

This land is common land.

Back at the inn we were ready for a hearty meal – and we dined well on game pie, local lamb and rhubarb crumble.

Drank wine we’d brought to the inn (that’s a clue).

Chatted awhile in the parlour with the other guests.

Retired to a crisp-white-sheets and blanket, snowy-bedspread bed, tired and happy.

An old armchair stood in the corner and a wooden towel rack.

Until morning and the birds… 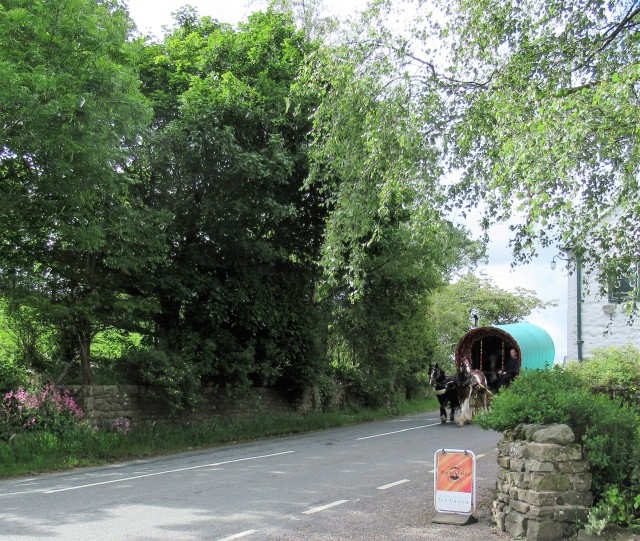 A pretty pair of horses, passing as we were about to leave, on their way to the fair

About to leave, as we chatted to our chef about her hidden gem of an inn, she said:

‘You’re not a filthy capitalist then,’ I said and she burst out laughing.

Our Quaker host joined us – and that’s when I learned how enclosure had passed this area by.

And that there’d been another terrorist attack, this time in London.

We’d stepped back in time – yet we hadn’t.

Full of joy, subdued by sadness, mazed with nature’s grandeur, we were ready for home.

Where nature, despite everything – and often far from calm – carries on.

40 Responses to Olde England, carrying on