Where there is sun, there are shadows

I couldn’t identify the Big Friendly Giant – but then he had no nose.  The bishop, though, was instantly recognisable. He had a mitre. And a sign. Plus he was standing right beside the church gate.

His ecclesiastical lordship, the BFG and I were keeping each other company in a small Lancashire village on a sunny, silent Sunday.

Well, silent except for the traffic.

And the occasional drive-by joker.

So, no, not really silent at all.

But it was that wrap-around kind of heat. When it feels as if everything, including sound, has been stifled by a hot, humid, invisible summery facecloth dropped on the world.

We’d parked at the village cricket ground, where a couple of chaps left over from Saturday’s match still hung around in their whites. Presumably waiting for the next game. Or perhaps Sunday lunch. 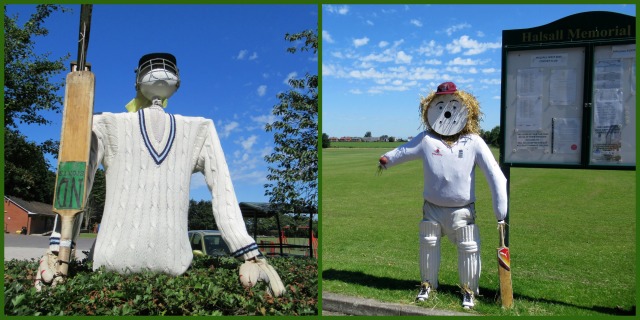 A stroll down the leafy main road brought us to the church and now, venturing past His Lordship, into the baking heat of the churchyard, I was a bit nonplussed to come across Joan of Arc (born 1412). But then, given the church tower is contemporary with Agincourt (1415), who knows what it has witnessed since? 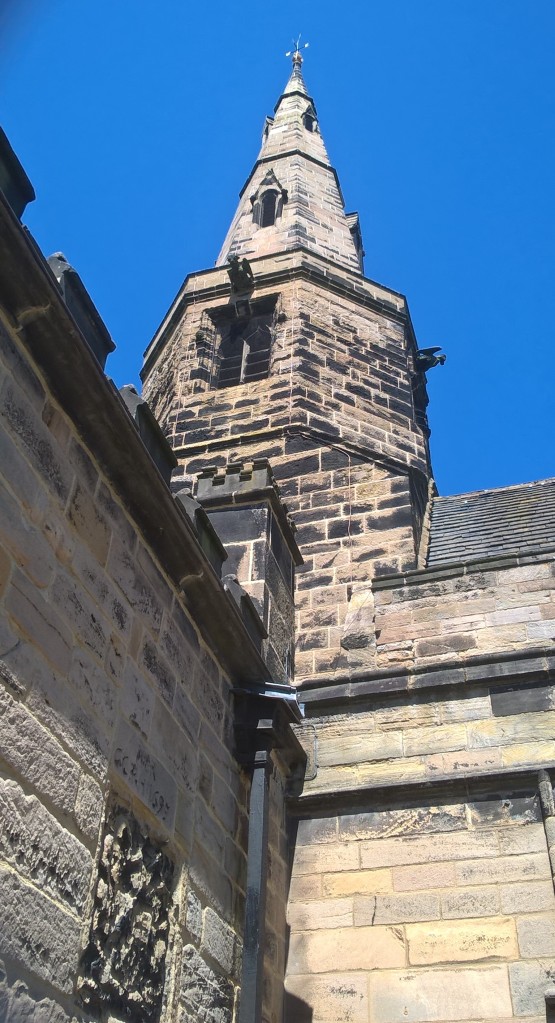 Part of the tower and spire of St Cuthbert’s Halsall

Despite the fact it was Sunday, the church door wasn’t open, so I can’t vouch for the treasures that lie within. But others have been there before me.

I have an unreliable, but charming guidebook I often use when delving into the past of my home county.

And, sure enough, ‘Lancashire,’ written in the 1930s by Arthur Mee, offers a tantalising, romantic glimpse of what lies within St Cuthbert’s  church. (While saying nothing whatsoever about the village.)

“in alabaster on their altar tomb are Sir Henry Halsall and his Margaret, he in heraldic armour and she in a long tightly-waisted dress, but without a head”

How inconvenient for poor Margaret.

I wonder if it is still there?

And, perhaps saddest of all the memorials in this place of many memorials:

“ still treasured in this place, where once his father was 42 years rector, is the sword of Wilfrid Blundell, tragically killed in the Boer War by an enemy to whom he was offering a drink of water.”

But none of these things we saw.  And leaving behind the enigmatic church and its welcoming graveyard, toddled off sightseeing.

And what sights we saw.

Across from the church, an artist sitting on a bench, sketching (I don’t think she should give up the day job). 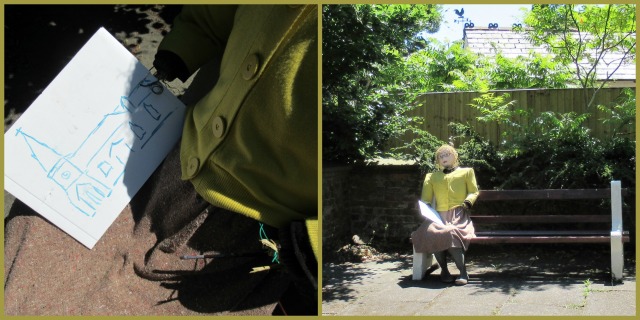 A tiger (who’d come to tea)  in the nature walk’s picnic area.

A beekeeper taking a break, small bees buzzing beneath a tree at his side.

A couple in their wedding finery. 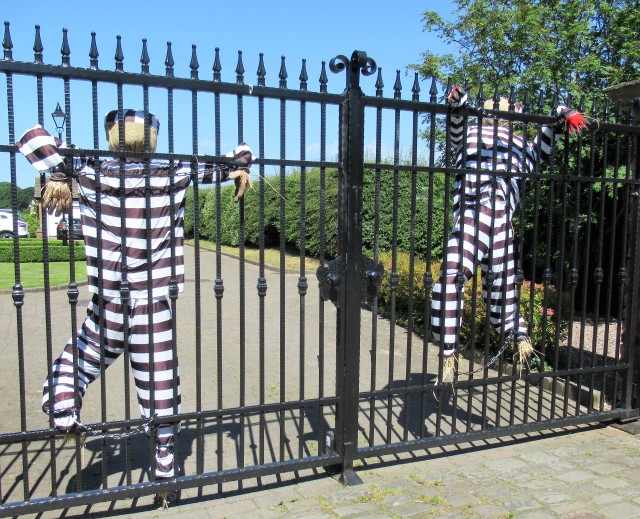 My poor feet, in that blistering [groan] heat, were ‘Tyred out’ when at last we reached the canal.

And conveniently, the pub. 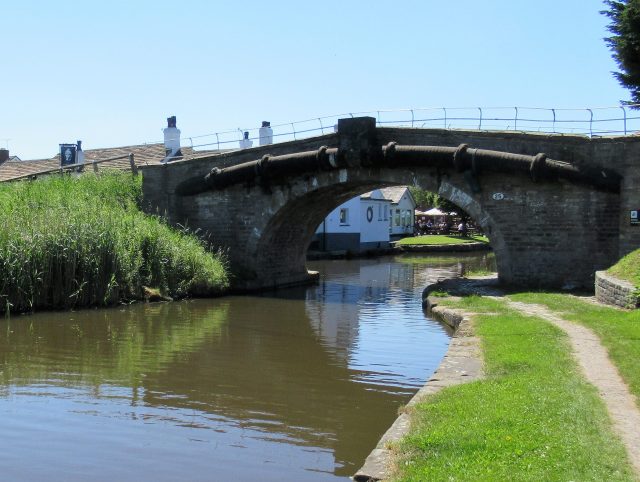 Here the first turf was cut for the Leeds-Liverpool canal.

A striking stone memorial rises from the ground, a tribute to the ‘navvies’ – ‘navigation’ workmen – who built the waterway. 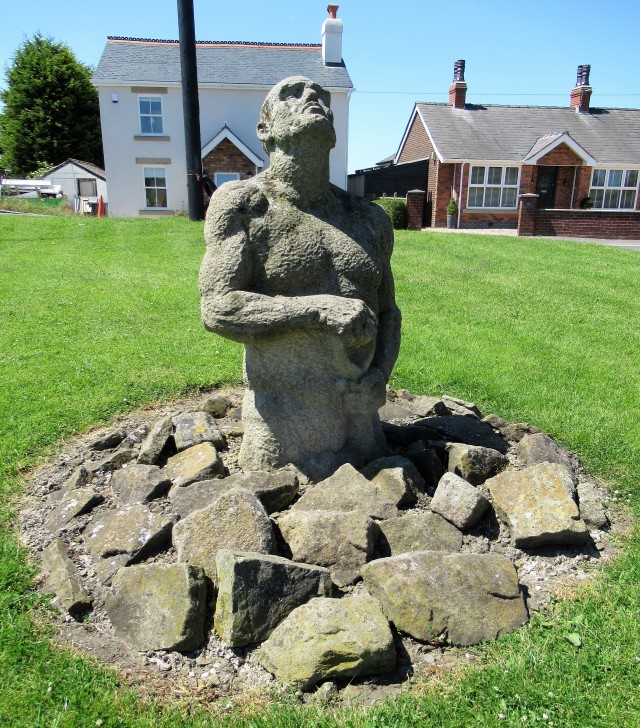 Adjourning to the pub, with two shandies and a bag of salty crisps before us, we sat by the cool water. Watching. 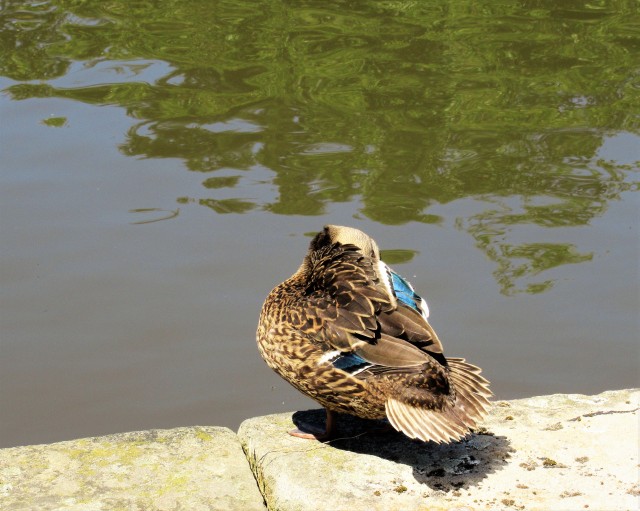 Canal boats, moored or puttering by.

And then, the sun still high in the sky, we drove home, to a glorious day in the garden.

But even in the heavenly sunshine, surrounded by blossom, with water boatmen rowing on our tiny pond, the wretched chiffchaff chiffing and chaffing non-stop, the remnant shadow of tragedy lingered.

A year ago Jo Cox, MP, was murdered. In a place I spent many a happy evening in my late teens, meeting my then boyfriend at the pub.

Thanks to Jo’s husband and her friends’ efforts, a memorial fund was set up and last weekend, around the nation, celebrations were held. To remind us we have more in common than divides us.

But other shadows linger, too. Wisps of cool, chill, emotional air.

The murderous London attacks: most recently a white man, in a white van, driving into Muslims leaving their worship.

The charred, accusatory finger of that tower block in London, home to hundreds of the less-than-wealthy, in our capital’s richest borough.

But closer to home, for me, those families, some just down the road, whose loved ones never came home from a pop concert in Manchester.

And I felt a little guilt that I could sit there, drinking chilled rosé, eating local asparagus, delighting in the quirkiness our world can still display, amid all the tragedies and terrorism.

But the truth is, our world can be both tragic and joyous simultaneously – it’s how things are.

And so, I’d just like to say thank you to the villagers of Halsall.

Thank you for reminding us what a wonderful world we humans can create. In such a small, yet such a happy, quirky way.

And to you, dear readers, wherever you are in this world of ours, thank you, as ever, for reading.

And I hope you enjoy the other ‘scarecrows’ (rather a lot of them!) that I’ve posted here below.

An annual festival of fun 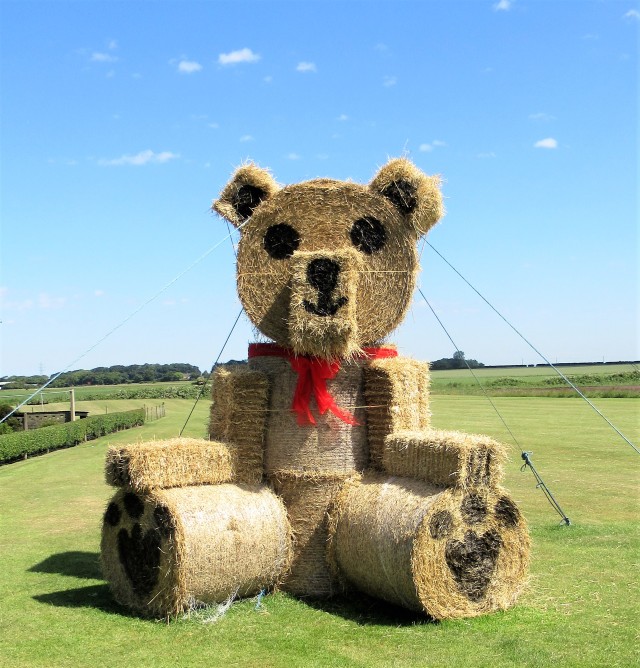 Not really a scare bear is it? 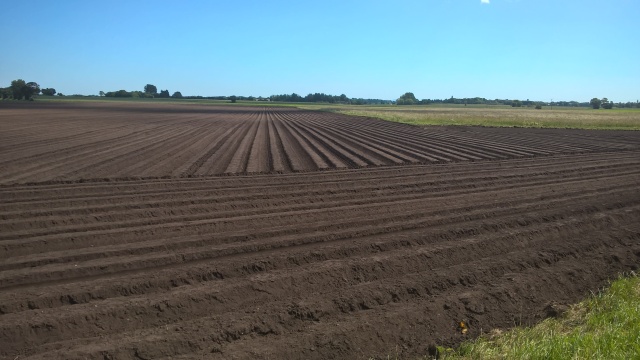 More tea, Vicar? (A quaint English saying, just leave it at that) 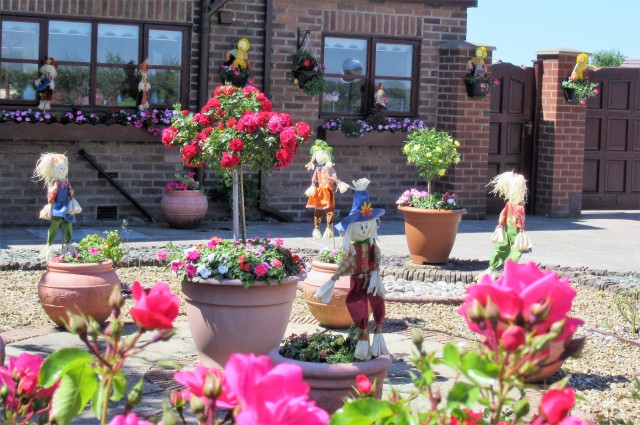 A very cheery garden with a beautiful rose hedge 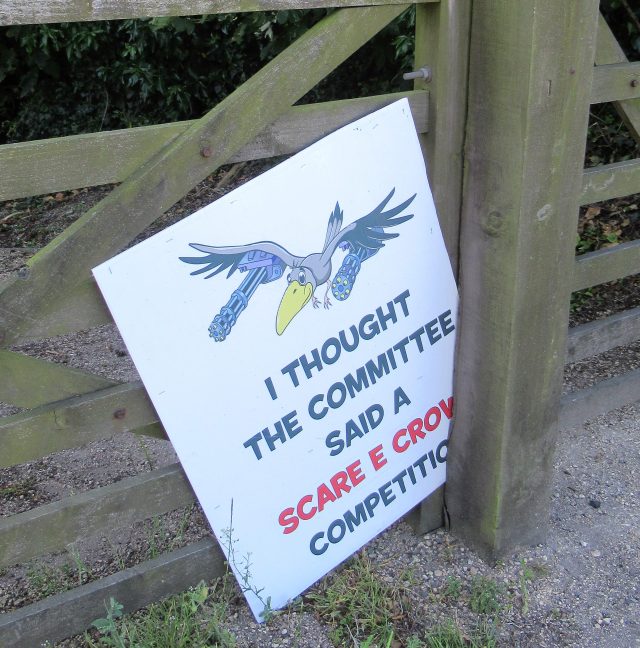 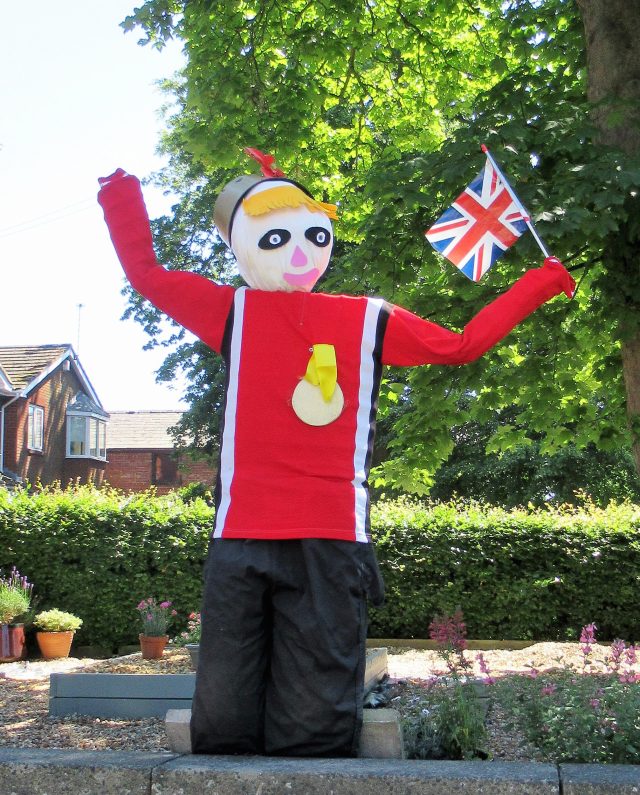 Sports related by any chance?

More workers, midwife (?) and a decorator 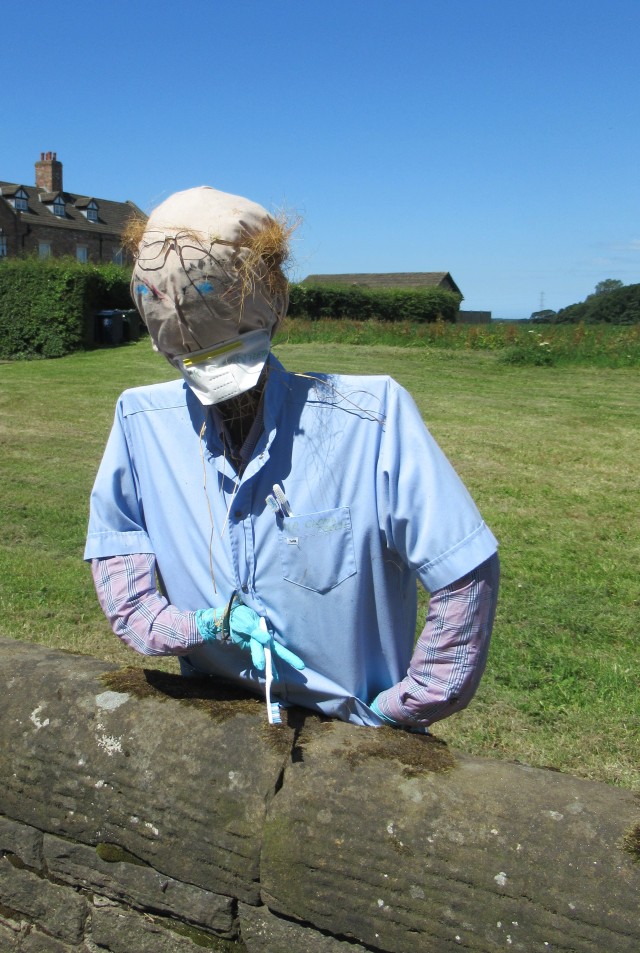 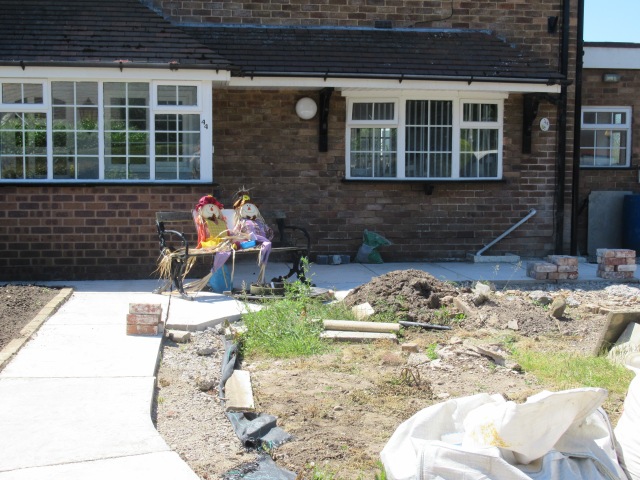 Sigh. This couple really have their work cut out

A very bright day in the farmyard 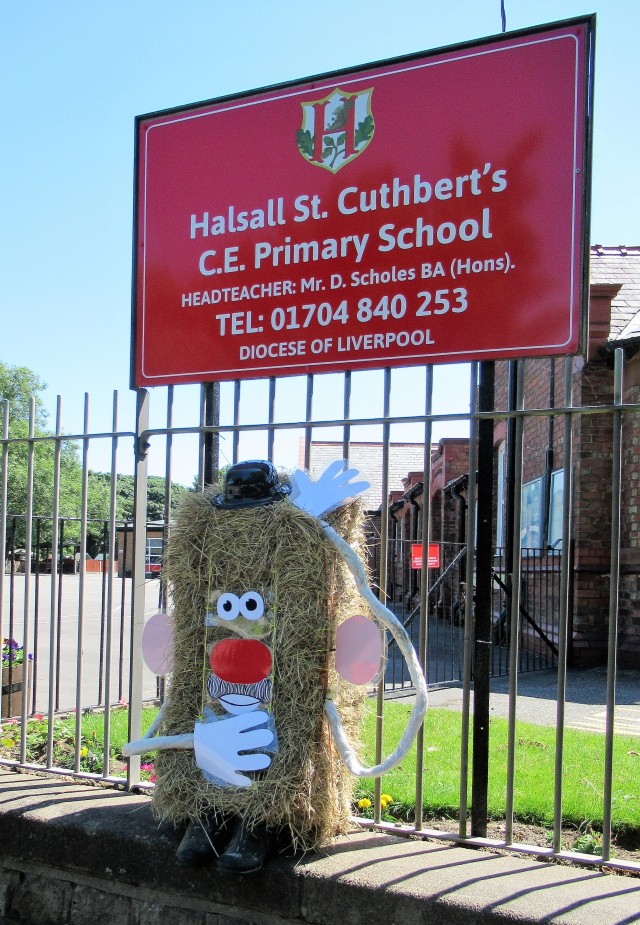 A selection from the fence outside the school – starting with? I want this to be Weetabix but…

Did you know Spiderman can bilocate? 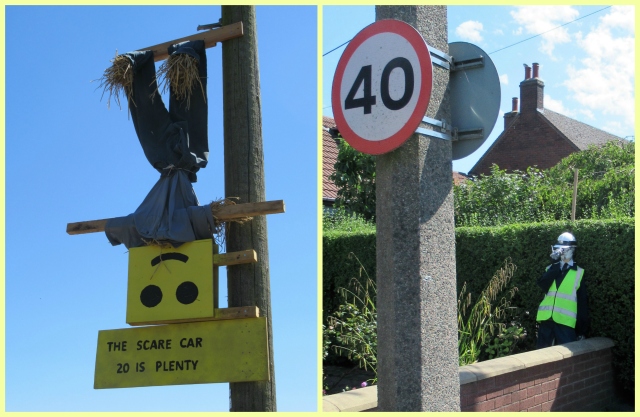 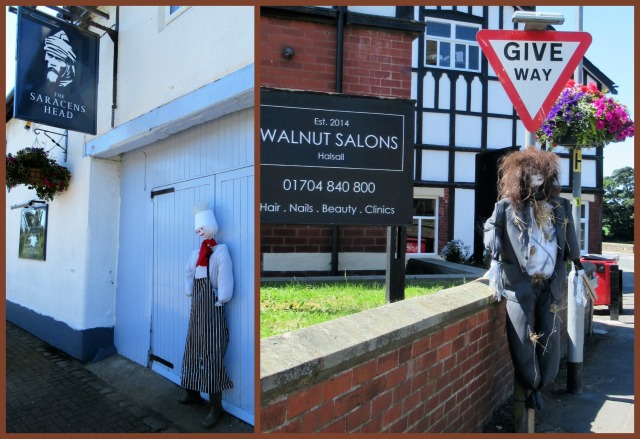 He hasn’t got a brain. And you can tell 😉

And finally, I nearly forgot, the one you have been waiting for all this time,  the Big Friendly Giant.

19 Responses to Where there is sun, there are shadows