Posted on December 14, 2017 by memoirsofahusk

The clouds passed, their smoke-grey curtain drawn back, revealing a bright blue sky and sunshine.

But it was cold.

It was a day ripe for returning. It had been a while since I  visited my sanctuary-place. 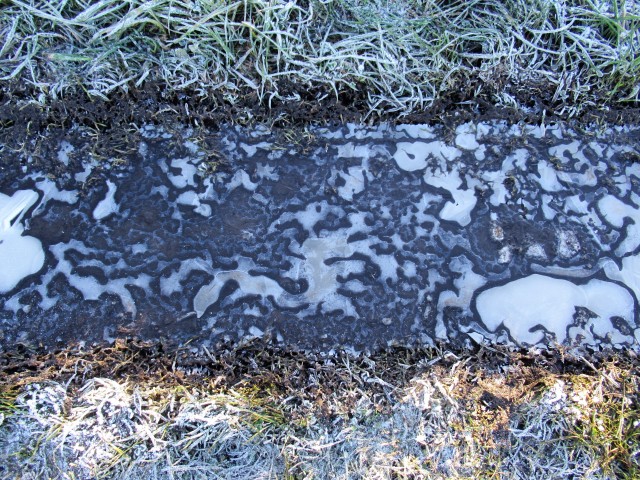 Two months ago, we had a date to see a comedian, Rich Hall. Hurrying to catch a train, fumbling for coins in my purse, I tripped, in my headlong haste, over a paving stone.

The Prof grabbed my left arm but couldn’t stop the descent onto my finger – third finger, right hand – and wrist.

Vanity overriding the shock, I rapidly assumed a sitting position, aware of traffic passing by.

My finger wasn’t at a good angle.

I took the Prof’s proffered hand with my undamaged one. Climbed to my feet feeling slightly sick.

Blanking any questions, I went straight to the station platform without a word, leaving him to buy tickets. And when at last I spoke it was to ask the most important of questions.

‘Have I scratched my jacket?’

Second time of wearing. Soft, supple Italian leather. Black and biker-chick style. But sophisticated for all that.

The meal – Sardinian – was probably good, but mostly I recall the ice wrapped in a napkin on my side plate, where I rested my ballooning hand.

Red wine helped. And Rich Hall was diverting, but I couldn’t clap.

Next day, with my hand bruised and swollen, I found it hard to type. To work, cook, dress – do anything.

Five days later I was longlisted for a first novel award. I had two weeks to lick 99,000 words into better shape.

Another five days passed (and 11,000 words were cut) before I resorted to A&E. Five hours later, an X-ray and turquoise-blue cast had shattered my illusions of being badly-bruised.

Six weeks dragged. Finally, the cast came off and dandruff of the arm descended upon my world like the snow that didn’t fall.

I could drive again, hooray!

But my burst of joy was clouded by the news I’d not been shortlisted.

The editing had been painful and inadequate, I knew. I was prepared for the decision. Still, it was another falling. Another bruising. And another attempt by me to dismiss it as trivial ensued.

But fall I did.

‘Don’t let that black dog in,’ warned my sis-in-law, nagmailing from Texas.

He growled, that dog. He prowled, whined and poked his head through the door.

Jack the Frost had danced his jig on the golf course overnight. The sun shone in a sky so blue the Virgin Mary could have worn it.

And a door opened in my head. I could drive to my special place.

I scraped the windscreen till my wrist ached and my fingers burned. Then I drove.

Seven miles later I stepped from the car and the cares of the world fell noiselessly, to the ground. 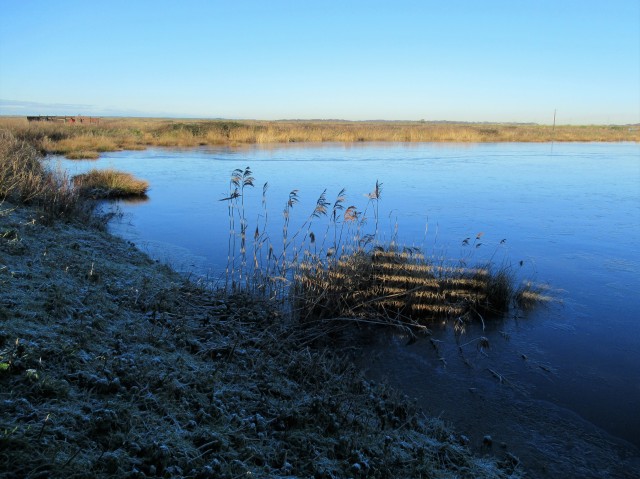 Ducks laughed and birds on the ponds whistled.

Geese honked and wheezed as they flapped in straggling v-formations.

I walked along the riverbank and something undiscernible made me look up. As I turned my eyes to the heavens a swan flew by, low in the sky, then glided to land by its friends on an icy lake.

I stopped at all my usual places. Spied on my old summer sights in their winter déshabillées.

I entered the young woods, through shaded sentinel posts.

Tree tips yearning for heaven burned orange in the sunlight. 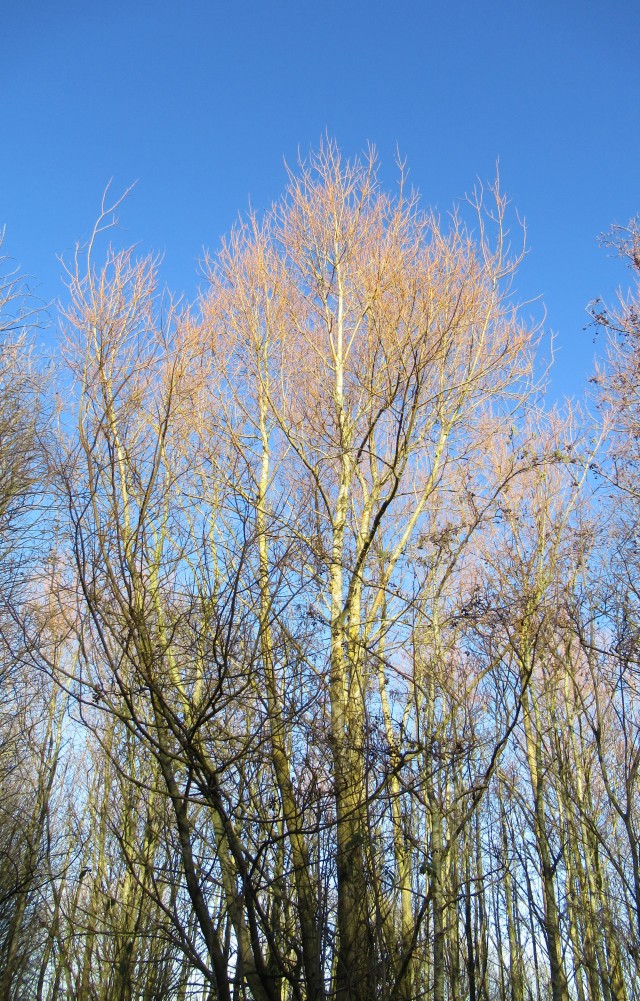 Standing among the trees, luxuriating in the peace that is not silence, I saw a sight and heard a sound.

And I heard its falling. 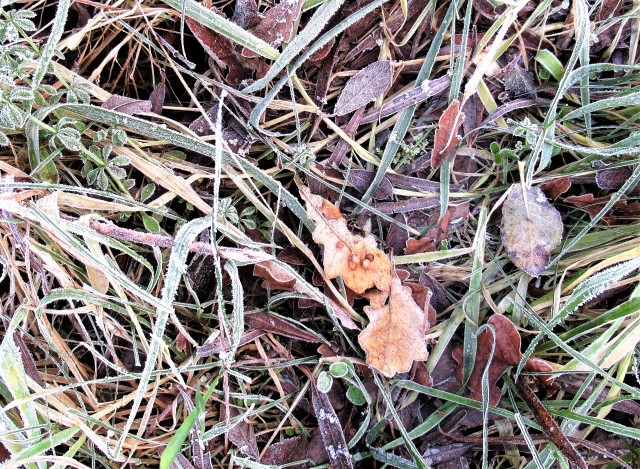 The leaf with spherical hitchhikers wasn’t the first I heard, which I couldn’t see landing among the trees, but I saw this and heard it fall

There, in the wood, amid falling leaves and dancing frost my spirits rose from the icy ground.

With the gift of a beautiful winter’s day, I was one with Mother Nature, in her shape-shifting, ever-changing, transformational glory.

As Leonard Cohen (in a different context) sang, ‘for something like a second, I’m cured and my heart is at ease.’

Pride – and many other things – may come before a fall. But resurgence, like spring after winter, can surely follow.