Posted on October 3, 2018 by memoirsofahusk

Dolls. I can see them, feel them, smell them, even though they are, all but one, long gone.

Edith and Anne, sadly had to go earlier this year. The mice infesting our garage had played with them more recently than had I.

Don’t get the wrong idea, I had cars, Lego, a clockwork train set. And a wind-up motor boat. Which I wound up too much, like I did my watch. And it stopped, like my watch.

These memories, stored in that file marked ‘past’, are revived and – according to science – revised every now and then when happenstance jiggles the box and fragments tumble out.

Memories of my childhood are split between two eras: before age seven; after age seven. That’s how old I was when we moved counties and life changed forever. 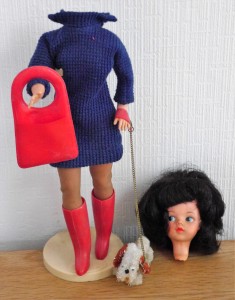 I have oranges and a newspaper for that shopping bag. The nylons on her legs are hold-up stockings!

The dolls are pre-seven. Except for Sindy, who lives with me still, headless, but chic. Still smelling as only pale, slightly flexible, smooth-but-vaguely-powdery-fleshed plastic dolls can do.

But the earliest doll memories are of very different creatures.

Two were small. Shiny, hard, posed with elbows bent. One pale-flesh-coloured and blonde, one black and raven-haired.  Identical, except for colour.

I liked the black one better, dressed her in cherry-red, blondy in pallid-pink.

The third doll was bigger. Much bigger. But since I’ve no idea how old I was – and thus could have been barely a toddler – that might mean not very big at all.

She stands out in my memory for one particular attribute: her head.

She was a ‘baby’ doll. Her baby-hair was sculpted into her head.

It was neither shiny nor dull, a sort of glazed warm brown. And cracked into patches.

A certain type of bread crust has reminded me of her ever since. And I wonder, now, if I ever ate any of her head.  I tended to try anything in those days, paper being a particular favourite.

But back to crusts.

I love a crust. But that’s not to say it has to be crisp or crunchy. Just real.

A key moment in my bread-consciousness occurred when I was seven. After the big move.

We’d crossed a critical boundary in England, from Lancashire to Yorkshire.

My eighth birthday lay in wait when we arrived in Thornton, Bradford. Where, as I soon discovered, the four famous Bronte siblings – Anne, Charlotte, Emily and Branwell – were born.

The tiny house that was home to eight Brontes

I found this out on one of our first shopping trips into the village to buy … bread.

I went back recently.

I’d always thought the bakery was next door to the Brontes’ house, but apparently I’d blanked out the butcher. The bread shop was next-door-but-one.

Which is probably why I often stood outside that bakery window.

And there  I saw my first plait.

I’d been reading ‘Heidi Grows Up.’ I don’t know how I missed out on ‘Heidi’ original but there we are.

In ‘Heidi Grows Up’ she obtained something special for her grandfather: soft, white bread.

I’d never thought of bread like that – bread was just bread.

Isn’t that the power of writing, to make you believe in, see, smell taste something in a completely different way?

That plait was different. Yes, it was white beneath its baby-doll-hair-brown crust. But it was springy, dense – and tasty.

My parents were of the generation for whom white bread was the smart thing to eat. And World War II’s privations meant aerated, fortified, added-to, mucked-about and sliced bread had become the norm in many households.

But that bandwagon was already creaking when I fell in love with the plait.

Pretty soon after that, we moved again and our weekly shop involved two bread stops: one for the weekly Hovis (or Turog), another for two white loaves and baps. All bakery made, not sliced and packaged from the Wonderloaf Factory down the road.

The brown bread was a deep and meaningful version of bread. Voluptuous when toasted and buttered. The fat oozing, glistening. Turning mere toast to a rich delicacy, to be savoured, eaten slowly, leaving me wanting more.

White, though, was still our daily bread. Crusty, yeasty-smelling, warm from the shop (‘wait till it’s cool,’ says mummy ‘or  you’ll get tummy ache’) but unlike the plait, fluffy-puffy in the middle. I could screw a piece into a tight ball and it wouldn’t expand.

I know, why would you do that?

But one more form of bread was interwoven through my youth. Bread that young, Catholic me found perplexing.

I liked it, not because (sorry about this) of its religious significance, but because it reminded me of Flying Saucers. That and the rice-paper edges of mass-produced pink-and-white, fabulously chewy nougat. 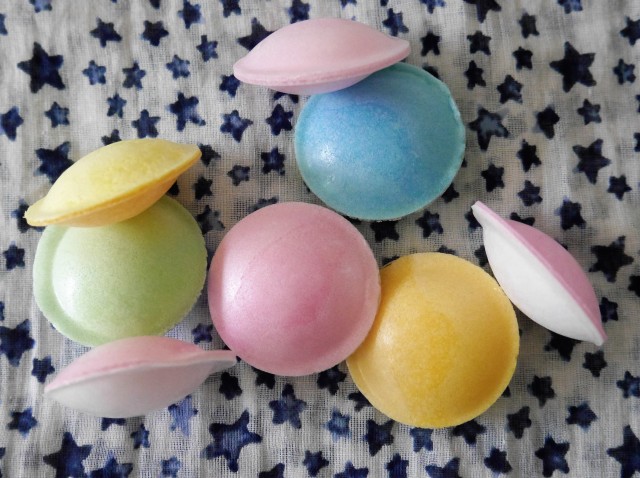 Flying saucers from our local newsagents. 3 pence each

Yes, every time I took the sacrament, I thought of sherbet-filled sweets or chewy nougat.

The newsagent didn’t have the chewy nougat so I bought some fried eggs instead. 5 pence each. The plate is about 5″ or 12.5 cm wide and for the record, the eggs are delicious (and, no, the yolk doesn’t squirt out)

At school I learned to make bread. The first attempt – a cottage loaf – was good. But paled into insignificance besides the next week’s doughy treat: Chelsea buns.

Domestic science lessons, though, aren’t always easily replicated at home. I can still make cocoa with milk. Lay a tray for an invalid.

But bread? With yeast? Limited patience, that’s me.

Which brings me round to soda bread. Again. Which I can make. Quickly.

This week Henry Hunter went and popped up in my comments.

I can taste it, feel it, smell it – even hear it*  all the way across the Atlantic.

*(turn up the video volume)

Chocolate, strawberry, garlic and herb (not all together, yuk.)

I can wiggle the tip of my tongue in those sourdough bubbles.

And the smile on his gorgeous face says it all.

He says you have to take it slowly …

Perhaps I should stick with words.

And as another Henry (O.) wrote long ago:

Inject a few raisins of conversation into

the tasteless dough of existence.

And carry on making my sunflower-pumpkin-sesame-seed, soda, buttermilk, baby-doll-head bread.

Not quite as smooth or as glossy as my doll’s head but you get the general idea. Artistic licence, yes?