Two nights at the museum. A dream fulfilled (not flushed)*

The train station in A Coruña looks like a cathedral. Or seems to as we’re being driven towards it by our nice, helpful taxi driver.

Inside the cavernous building, two men on the track are washing a waiting train – not ours, which seems clean enough when it arrives.

All goes like clockwork and less than an hour later we’re there – Santiago de Compostela.

The guide book suggests we could walk to our hotel but we opt for our third (so far) pleasant, helpful, taxi driver’s assistance and arrive at our destination grateful and gawping.

Is this really our hotel? 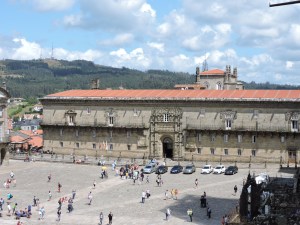 The outside’s impressive – but the inside is almost unbelievable.

The Hostal Dos Reis Católicos, now a Parador hotel, was built in 1499 to give shelter and aid to pilgrims. The way was hard. On the long and arduous camino, pilgrims were often beset by vagabonds or fell prey to sickness.

The hotel’s own guide to its history is told through wall-mounted 79 plaques and – I’ll be honest – we fail to make it around them all, or even most of them – during our two night stay.

The building itself is arranged around four beautiful courtyards, named after the gospel Saints – Matthew, Mark, Luke and John.

Gargoyles squint down at the earth, like dire warnings of the ugliness resulting from sin.

The Hostal had its own medicinal gardens and two of the courtyards now boast lush, green knot-style gardens that guests can wander around or look down on from the corridors above through a plethora of windows.

One of the Hostal’s functions during its long life was as a foundling orphanage. As plaque 35 tells us:

There was a window with a bell and revolving compartment like those in cloistered convents. A person would ring, wait to hear Ave Maria Gratia Plena and then leave the newborn.

How cold it seems to us with our modern sensitivities. But also, somehow, reassuring.
The hotel occupies one side of the square whose focus is the cathedral.

View from window on a grey day in Santiago de Compostela

Just a doorway in the hotel

Leaning out of our room’s window, turning away from the second largest monastery in Spain which rises opposite us, we can see the towers of the cathedral. One is shrouded in scaffolding – but it fails to mar the experience.

Does it live up to my expectations? No. It exceeds them, but not in the way I expected.

I always hope, when visiting places that have special spiritual significance in the world, for whichever religion – or none, that I’ll feel the essence of that spirituality myself. Share in it.

The cathedral in Santiago de Compostela is vibrant with gold, with saints, with carvings, with paintings. It oozes history and fervour and hopes and dreams. 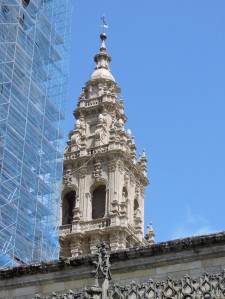 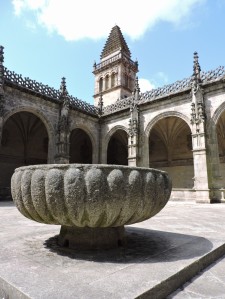 A corner of the cathedral taken again from the upper quadrangle

Amazing what you see when you look up sometimes …

One of the most ornate organs ever surely? Look at all those cherubs!

In the cathedral museum

So many saints and virgins

Everywhere the scallop shell that is the emblem of the plilgrimage

But, it’s not the building that works its magic on me.

Next day, we’re standing overlooking the square from the cathedral museum’s terraces when a large group of young people arrives, rucksacks on backs, staffs in hand, their pilgrimage complete . A cheer arises from them – and many of those standing around the square share their celebratory joyfulness. 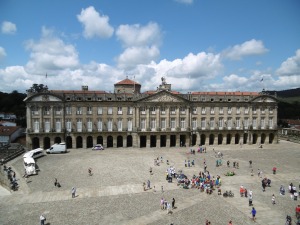 Pilgrims complete their way in the middle of the Obradoiro square to which all routes in lead. The building here is opposite the cathedral and is the Rajoy palace, parliament building of Galicia

This happens again and again in large and small clusters. Some individuals arrive and you can see on their faces just how much it means.

Motivations are no doubt many and varied, but it’s clear that everyone who undertakes el camino seeks something. Some spiritual or personal goal has driven them on. No-one looks disappointed.

Along with the many genuine pilgrims there are plenty of tourists – like us – who haven’t walked the camino. But it feels as if everyone is here for more than just the buildings – or the souvenirs. 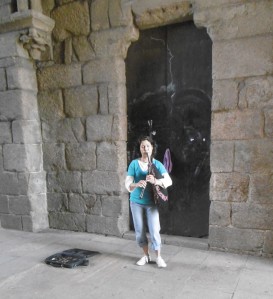 The town seems not to have wearied of its nature as a destination. It doesn’t exude the cynicism so common to major tourist destinations. Local people don’t seem to have that blasé, seen it all indifference.

The cathedral, unlike some of our beautiful British cathedrals (shame on you Ely) doesn’t charge the hordes for admittance.

Prices are not much higher than those we found in A Coruña.

It’s a place with a heart and soul, despite the regular influx of visitors.

Pictures don’t do the place justice. Or at least, mine certainly don’t. I’ve mixed in a few taken by my fellow traveller’s bigger and better contraption to help improve the offering.

And it was a great disappointment to me to discover that my favourite visit, to a monastery, left me with even poorer pictures than usual of a moving and wonderful place.

But that’s also a lesson.

I can still feel its sanctity. And that is, after all, what matters.

Church below our hotel – a fancy facade showing deadly sins fronts the square view while the plain bit is left behind. It’s a meeting place now for Alcoholics Anonymous 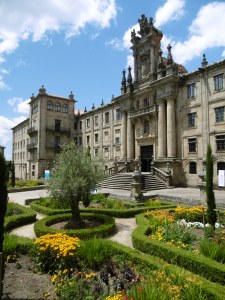 But it’s not all about churches and buildings and pilgrims and shops and history. As you might expect, we also eat while we’re here. The food is wonderful and so is the wine – more local, tasty, red and white, drunk in some amazing settings.

We find a beautiful, tranquil bar in a leafy garden behind a cobbled street, drink a beer to the sound of a fountain, amid sculptures and magnolia trees.

I buy a tiny silver cross to add to my charm bracelet and am bought a gorgeous silver and jet necklace – this is my official birthday trip, after all. Postponed from last December. And I’m being spoilt, again.

My dream has come true. And I would gladly return. In fact, I have a notion to walk the other route, from Portugal. Over many, many days, in manageable chunks. We’ll see.

Meanwhile, after two nights in the museum, with much left unaccomplished, we depart on another train, for one night in another Parador, in Pontevedra.

How can it live up to this?

Well, it can’t – but a monastery there will go straight to both our hearts – and one cake … well, more of that in the next instalment of our own little, touristic, camino. 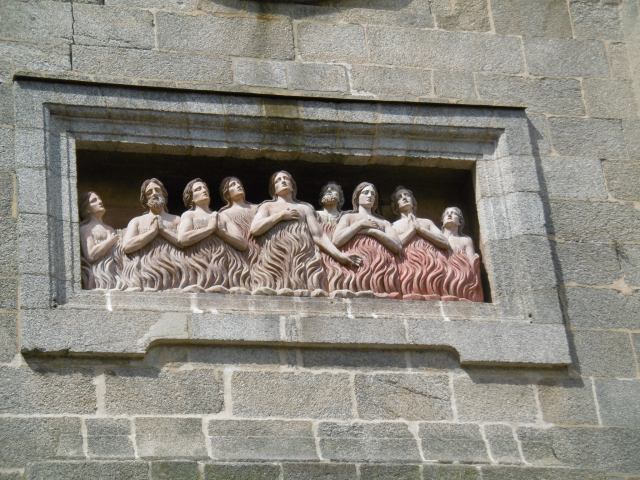 *As per the announcement in the lavatory in our train from Liverpool to London about what not to flush, see From Sidney to the Tower of Hercules

13 Responses to Two nights at the museum. A dream fulfilled (not flushed)*