A town of views and bridges, I’m expecting. Well, we see the bridges, and the view, from the train, as it pulls in to a modern, bustling town.

The station’s part of a shopping complex and we wait some time for a taxi.

Portents. Do you believe in them? The taxi’s our first that isn’t a positive experience. And as the high rise buildings, ring-roads and patches of barren city land unfold around us we’re feeling a bit, oh-oh, was this a mistake? 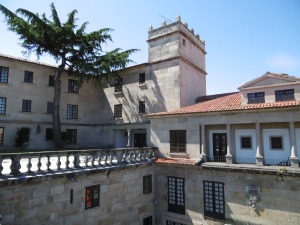 Parador in Pontevedra taken from roof terrace outside our room

But pulling into our hotel’s forecourt the sun beats down and the traveller’s weathervane swings round to ‘phew, that’s a relief’.

Another Parador. For one night.

A grand but not enormous building it nestles below the old town, just inside the cordon sanitaire of buildings that separate it from the real world, with its bins and lorries and edginess. 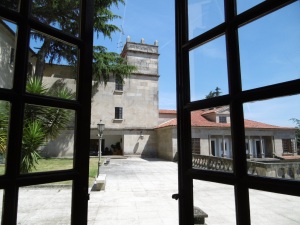 View through our open window

Our room has a grand view but smells a tad damp. We fling open the window. Try to flush out the scent of disappointment that infected us on the way from the station. 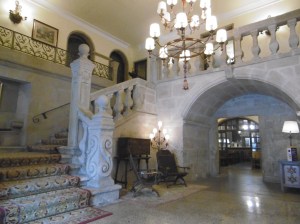 The hotel is lit by motion-sensitive lights. They’re slow to react and I feel like an intruder as we make our way to the imposing stone staircase.

Map in hand we trudge up another hill.

Come on legs, you can do it. 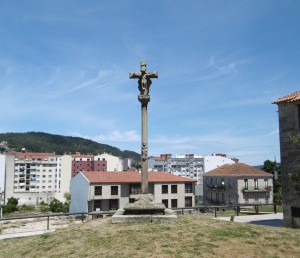 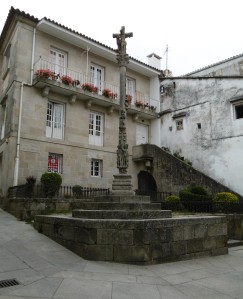 It’s past the middle of the day when we light upon the first church. A beauty. 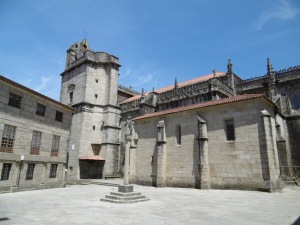 The 16th century Basílica de Santa María Mayor can normally only be entered from this side, its main entrance is blocked off by a gate and iron railings

Dark inside. The elaborately carved front is bound tight by railings. 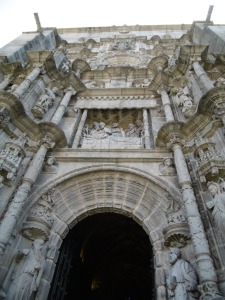 A stone-carved man in glasses keeps watch on the right, a regal young woman looks down boldly on the left. 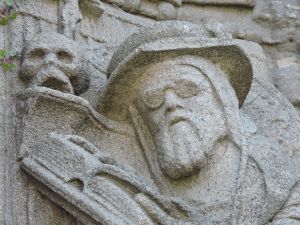 Who is this man with glasses and a skull? 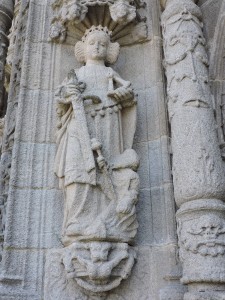 Back inside, Our Lady – like our Lady of Fatima – gazes out beneath a halo of lights. An elderly woman sits at a desk and pulls out postcards for us to buy, patient as we delay her closing time. 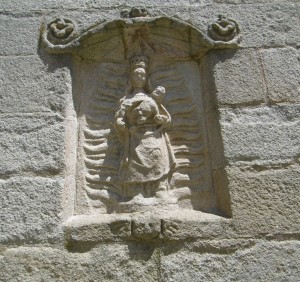 The church feels good, a place where weddings, christenings and funerals happen. Flowers decorate the altar.

Revived, we march on. Vainly trying to find other places marked on the map.

Tired, a little dejected, we return to the hotel for lunch.

A tumult greets us. A froth of babbling bodies clasping glasses of beer and smoking.

It seems the dining room is theirs, but we can sit outside and eat.

This proves to be A Good Thing. 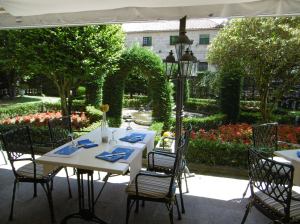 The garden, with its fountain, is a soothing sight for stone-weary eyes.

The plate of air dried ham and meats, the salad that turns out to be huge, the dish of empanadas – slim slices of flat pastry sandwiching tuna and pimentos – is delicious. 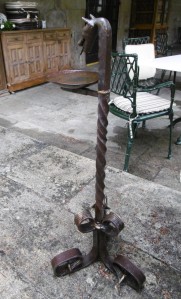 A dragon for the smokers

A copa of wine each helps the food go down and after a rest on the stone benches outside our room, basking in the warmth of the terracotta roof tiles as well as the sun, after checking out the orange trees, we set out once more as tourists. 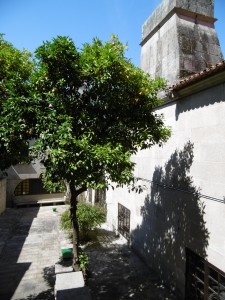 Orange tree in courtyard inside hotel 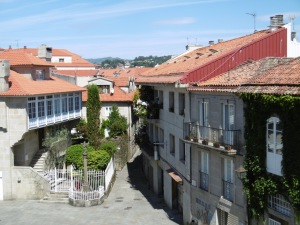 Lower part of the old town from the roof terrace

The town’s bigger than it seems. We wend our way up to the museum. Which is closed.

The scallop-shell-shaped pilgrim church leaves us less cold. We avoid the man selling lottery tickets and rosaries. The doorstep beggar, a woman, receives a coin – how can we leave a church without?

A strong wind arises. The sky turns grey. We hurry past shops and we stop – I stop – outside a pastelleria. 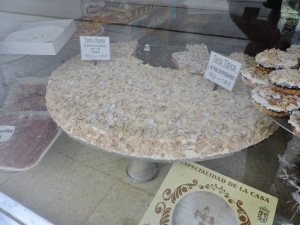 ‘You cannot leave without trying me’ (in Spanish actually) says a label on one cake, the Tarta Rusa.

It looks like a huge ‘Jap’ – the meringue and hazelnut cake that’s been a favourite since I was tiny.

I buy a slice from a borderline surly shopkeeper and risk his wrath by asking him to wrap it up when he serves it just in a napkin.

While I’m inside, the other half of the party receives some unwanted attention. Taking pictures in the window he sees a suspicious character approach his bag from behind and moves away. 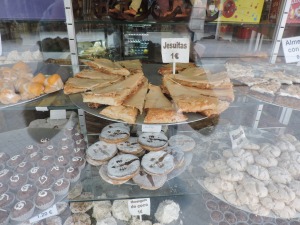 Cake carefully stowed in said duffel bag we vow to return for more cakes, ‘Jesuits’, later and set off, without much enthusiam, for the next sight on the list.

Grudging, now. That’s how I feel.

Because I don’t feel welcome in this commercial part of town with its shops and hurrying people.

Outside the Convento de San Francisco two more beggars are setting up. One puts his leather jacket to one side and the two take up strategic positions.

We’ve already seen a woman being directed to her place by another man. It seems obvious there’s a team at work. 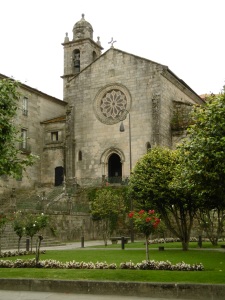 A gloomy day at the monastery

Feeling gloomy and despite the guide book opining that it’s, ‘best admired from the outside’ I step inside.

It’s the darkest interior so far.

And that’s when things change.

Some inanimate places seem to suck in the bad things and some the good. Some seem to exude a very human attitude – pride or shame, pity or joy – even distaste. 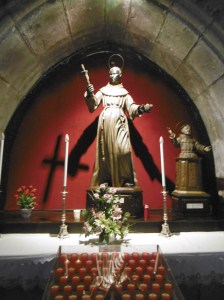 I believe this is a St Benedict of African origin and yes, those are electric votive lights in front of him

In the convent church I feel compassion. The walls and saints and pews and floors and even the electric candles (10 cents per glow) are just the background. This church is about acceptance not about glory.

Back at our hotel, the rain settles in. We return to the terrace, sitting under cover. The greenery is grateful – and so are we. Saved from venturing again into a town we’ve left with some relief. 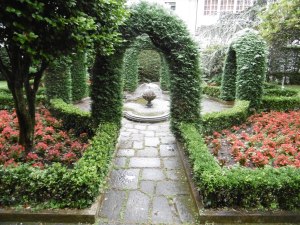 Fountain in the rain

We order a plate of Galician cheeses which comes with artisanal breads and biscuits. A bottle of red wine lasts until the night turns dark. We retire to our damp-scented room.

And eat the cake.

Before breakfast someone suggests he might go and get a couple of ‘Jesuits’ for the journey.

But, after empanadas, ham and fruit, he recants.

We know we haven’t done Pontevedra justice, but we’re not sorry to leave.

And we are rather anxious.

Vigo is the next stop on our train journey. Of which, our guide book says, ‘although it makes a good base for trips … has few attractions of its own’.

We’re there for three nights.

Let’s hope the guide book’s got us wrong, again.

4 Responses to Crosses, beggars and disappointments. But also cake