The Edge. Part I

As any sensible grown-up knows, traffic on a Friday afternoon before a spring Bank Holiday weekend is likely to be bad – and unnecessary driving best avoided.

As any sensible adult would almost certainly agree, if there’s also a train strike on that Friday, it’d be doubly foolish to set out on a jaunt.

But then, I wasn’t being a sensible adult.

Our house looked like an adolescent had been left in charge for a week. I’d been all alone. The academic was researching in Ghana. I was just – um – reading. Weird things.

It began with The Stone Book, by Alan Garner.  A book which gives me strange feelings inside. Not fear. Not joy. Something in between.

Enough to make me wonder about the world.

About the connectedness of minds, of Nature, history and prehistory.

Of the presence and absence of time.

Here’s what the blurb at the front says (bear with me, it’s long, but will be relevant):

‘Astride the golden weathercock at the top of the new church, Mary looked down on the Victorian village that her father had helped to build […].

Mary wished she could go to school and learn to read. She wanted a prayer book to carry to Chapel. Other girls in the village had books, although they could not read, and used them for pressing flowers.

Mary’s father was a stonemason, and he could read books and also the inside of stones. When Mary asked him if she could have a book, he took her under the hill where the stone came from. ‘Follow the malachite,’ said Father. And Mary walked, by herself, deep into the layers of the earth. When she returned she knew a wonderful secret, and she did not need to ask again for a book.’

Now, there are many, many things about this book that make it obviously written for me.  But not needing, or wanting, books, you may surmise, isn’t one of them – and you’d be right.

Yet, the more I watch and listen and learn from the world out there – and the world inside – the more I realise that book-learning’s only a thin dimension of all the learning-to-be-done about our planet and all that’s in it.

There are so many aspects of this book that make a butterfly unfold its wings in my insides, it would take forever to explain. So, here’s just one.

Some time ago I wrote an unfinished novel about a young woman. Eve and the Serpent, it was called. Eve met a man who played saxophone in an orchestra. He also played a period instrument. And the instrument was a serpent. Or, more accurately, an ophicleide.

Now, I don’t know about you, but despite being familiar with classical music, I didn’t grow up knowing about ophicleides. I only found out about them when I researched serpents (of the musical kind) for this book.

From an 1888 French catalogue (Public domain via Jean Luc Matte)

The Stone Book features an ophicleide.

Alan Garner is famous for his weird and magical children’s books. Some of you may have read  The Weirdstone of Brisingamen and The Moon of Gomrath.

Alan Garner says he does not write for children, he writes for himself. I read the two ‘big’ books as a child and they are marketed as children’s books, but the final part of the trilogy, only a recent publication, Boneland, is very deep, much more adult in tone to my mind – bonkers but brilliant! It is only thanks to my lovely friend Ginni that I have this quartet featuring The Stone Book. One of the best presents ever.

I love connectdnesses – and so revisited the Garner books. Twice.

The second time this week.

I was so enthralled – in their thrall – that I had to go. I had to see The Edge for myself.

Alderley Edge (where I believe an elderly Alan Garner still lives) is in Cheshire.

Cheshire is regarded as the posh bit of northern England. Into which it barely scrapes, being more like northern midlands to my mind.

It’s a stockbroker belt. A place of high house prices and footballers.

On Friday I set out to drive there, selecting ‘avoid freeways’ on the sat nav since I was all alone.  Because between me and the Edge is the M6, a motorway I’ve mistrusted ever since I was 21 and the best friend a girl could wish for was killed on it in a car crash.

But … Bank holidays are also the time when roadworks appear at the least convenient times and places. And after two ‘detours’ I succumbed. Parked. Re-set the sat nav for ‘fast’ and joined the cantering hordes on the dreaded M6.

It was only then I realised I was heading for Manchester airport and felt a pang of guilt. If I was going to drive there for a jaunt, why not to pick up the homecoming traveller on Saturday?

But on  I pressed. Past the constituency of our former Chancellor of the Exchequer (we’ll come back to George Osborne later) and finally, to Alderley Edge.

There’s a ‘village’ of that name below the actual Edge.

The high street was busy. Stuck behind a black, Porsche 4×4 which was waiting to turn into the car park of – where else – Waitrose [foreign friends – this is an upmarket supermarket] – I watched an unrelenting parade of white or black, shiny 4x4s heading in the other direction and began to regret my venture.

What if the Wizard café (my first goal) was secretly ‘stockbrokers only’?

Well, there was no turning back, now.

The Porsche turned. I ploughed on. Up the hill. Past men in ear protectors mowing other men’s lawns. Past gates and walls and rhododendrons. To the top of the hill and ‘you have reached your destination’ – a rough roadside car park. Not the Wizard’s place.

Two men in real workmen’s gear stood chatting. The Wizard’s Tea Room raised a smile and a wave of the arm. So, on I drove. Found it. Parked.

And heaved a sigh of relief.

It was small and dark inside, but then wizards are comfortable with darkness, I imagine.

The Wizard of local legend revealed an army of knights with milky white horses sleeping beneath these hills to a farmer whose white horse he needed and paid with treasure.They wait till they are needed to save the world – meanwhile large black birds keep watch …

I ate a toasted bacon sandwich – delicious, thick bacon, no fat, perfectly cooked – and drank Cheshire tea. The ‘loose leaf’ tea, oddly, came in a bag – albeit a large one.

The time had come to brave the hill.

Fearing disappointment, I reached a gate and hardly dared pass through. But then I saw a sign: ‘To the Beacon’.

I thought of the eve of Gomrath.  Of the fateful decision of Susan and Colin to light a fire.

And how close the world then came to ending. 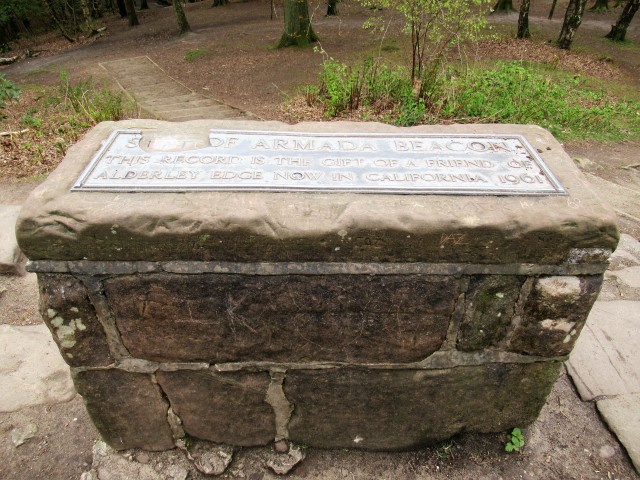 It didn’t feel like the lonely place atop a hill where two scared, cold children had lit a fire which burned cold and raised a fearsome ancient force. But this was just the start…

Part 2’s about vistas, visions – and a rather angry me.

14 Responses to The Edge. Part I