Sun, fun and feeling the wind in your hair

Posted on October 24, 2018 by memoirsofahusk

One of my favourite works of fiction is the Deptford Trilogy by the late Canadian author, Robertson Davies. A master story-teller if ever there was one.

In it, one young boy’s instinctive reaction sets the fantastical ball of the story rolling. But it’s when another boy runs away and joins a travelling circus that the dance of their fates begins.

We all recognise stereotypes of circus and fairground: tricksters and con-men, squalor and crime. Deceptions, grotesques and life on the road.

I’ve never been a circus fan, but the illicit appeal of the fairground had me hooked from an early age.

At school in my teens, when we were asked to write about the fair which visited town at seasonal intervals,  I began my story with a newspaper, blowing down a road at night, after the fair had gone.

I can still see that image in my head. An image drawn from reality. The rest was a product of my over-active imagination.

Which may explain why I found myself at a lunchtime talk by Norman Wallis, proprietor of Southport’s ‘Pleasureland’. Whose family dalliance with fairgrounds dates from the nineteenth century.

A man who might – in days of yore – have been regarded as ‘undesirable’, the term officials in our coastal town used, more than a century ago, for the fairground folk. 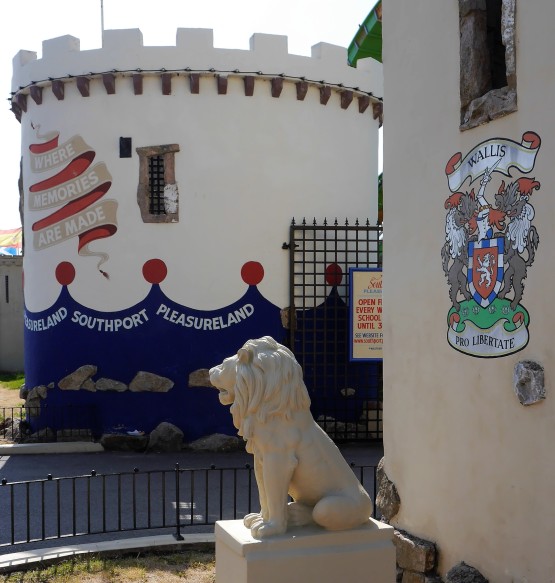 Norman was a good ten minutes into his talk when I arrived and had to enter, mortified, from the front of the hall. In full view of the man himself – and everyone else.

As I climbed the stairs to a seat my heart sank. A silver-headed crowd. Story boards propped against the stage. One man at a lectern. All the makings of a dull – I checked my watch – how long?

I guess a man from a family like Norman’s is almost guaranteed to be a showman and a salesman, whether born, or raised.

And a very good salesman he was.

‘There are more flowers in Pleasureland than on Lord Street,’ he said. ‘We were up at one o’clock this morning watering them.’

More flowers than leafy Lord Street? On which Napoleon III supposedly modelled the boulevards of Paris?

I had to check it out.

Which is why I found myself, one sunny Sunday, pre-loved camera in hand, wandering past the bowling greens en route to the rides.

Were there more blooms in Pleasureland than on Lord Street? I’ve no idea. But there were some jolly big ones…. 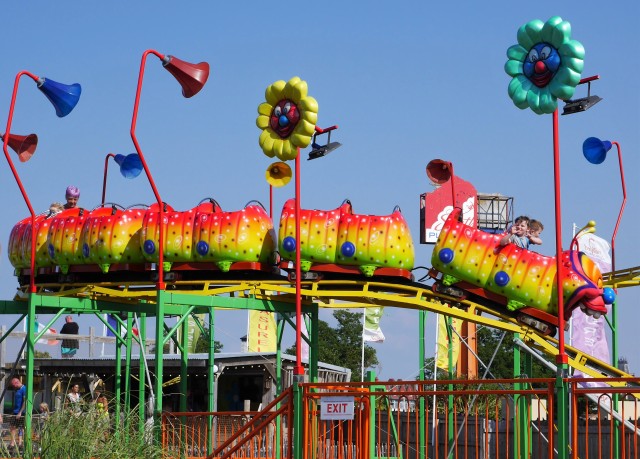 As for Norman being up at one in the morning watering them? Well, it had been very dry and they were still blooming. I’m just not convinced he wields the hose – or watering can – himself.

But why quibble? It doesn’t matter.

We’re talking about a fairground (sorry, Norman, I know you don’t like the term) with flowers everywhere. 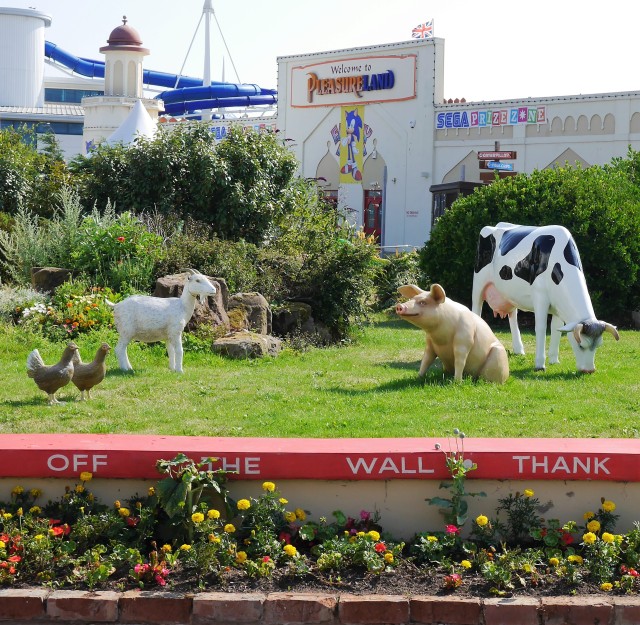 Which is clean and tidy.

Where the uniformed staff are polite and friendly.

I don’t feel I have to clutch my purse to my side, don’t feel everyone is out to make a fast buck.

‘If I had a pound for every time someone took a picture of that carousel…’ grimaces Norman.

Yes, we all love a picturesque carousel, but I see his point. When did you last ride one? 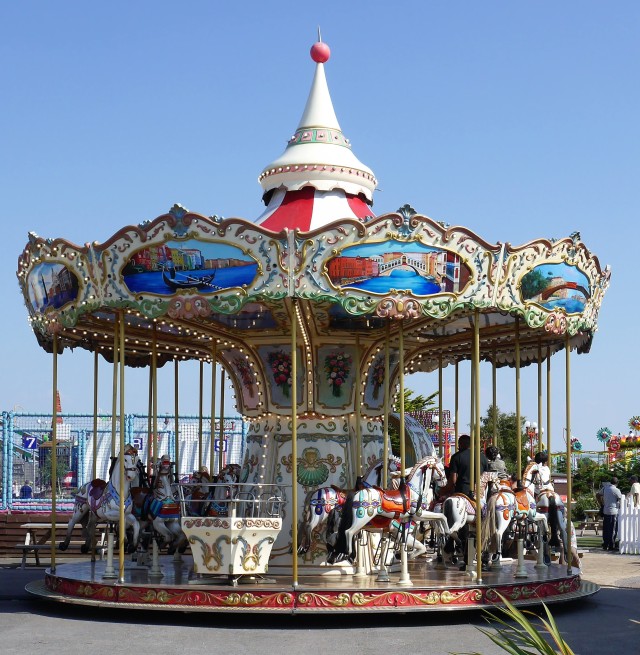 I’ll be honest, I didn’t spend any money, that Sunday. But I am writing about it. And I have spent money on previous visits and will again, because…

Well, look at the pictures and tell me – could you resist? 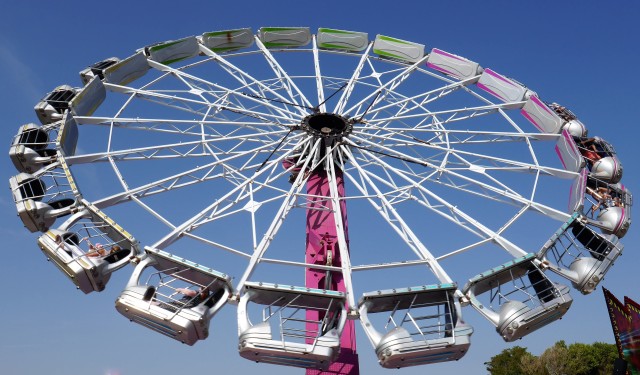 But before I give way to more scenes that had me waking up next day feeling glad to be alive, a few words about Norman’s future plans.

I’m sure he’ll meet resistance. Isn’t there always, to grand plans? But I have a feeling he’ll get his way.

This is the man who, as a little boy, ran away from school three times. (The opposite, when you think about it, of running away to the circus.)

His opportunity to acquire this showground came in 2011 when another man with vision died. That man’s main business was (whisper it) in Blackpool. The gaudy relative up the coast.

Blackpool Tower is clearly visible just right of centre, way below the wingwalkers wowing the crowds at this year’s air show – as seen from the pier by me on a really grand day out

But that man’s business heirs didn’t want rivalry from the upstart down the coast.

When Norman took over it had been trashed. Looked like a battleground.

‘I thought electric cables grew out of the ground,’ he said, ‘there were so many of them buried everywhere.’

And when it rained those cables flowered sparks.

But he persevered. Despite the vandalism and arson attacks.

And after seeing the images I think there should be a Wallis’s ride called ‘the phoenix.’ Because a truly fun fair (sorry, again, Norman) has risen from those ashes. Not the biggest, not the most extensive, but fun.

He wants – naturally – to attract more people. Make Southport (via Pleasureland, of course) a major destination.

Distractions compelling enough to prise us away from our screens.

And if anything can do it surely an exhilarating fairground ride can?

As the man says, ‘you can’t feel the wind in your hair on the internet.’

But Blackpool’s not forgotten. Nor, I suspect, forgiven. Despite the fact Norman’s early career was there, in marketing (what else).

You can see its famous Tower – and the big, big ride – from Southport beach.

From Pleasureland, probably (I didn’t look).

Across the Ribble estuary it lurks and smirks, cocking a snook at Southport.

Such a fabulous day at the airshow, yes, Blackpool is there 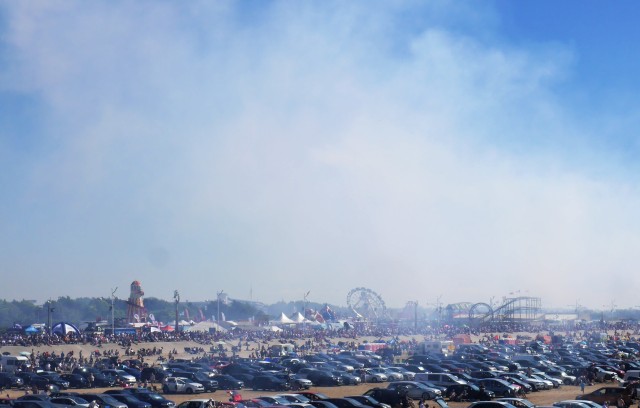 Pleasureland on the right behind the beach, also seen from the pier during the airshow wreathed in the smoke the aircraft use for displays

But the showman’s world is about enticing the crowds with the latest thing.

So Norman has a plan.

His face cracks into a grin.

His eyes crinkle and twinkle.

‘You’ll be able to see it from Blackpool,’ he chuckles. 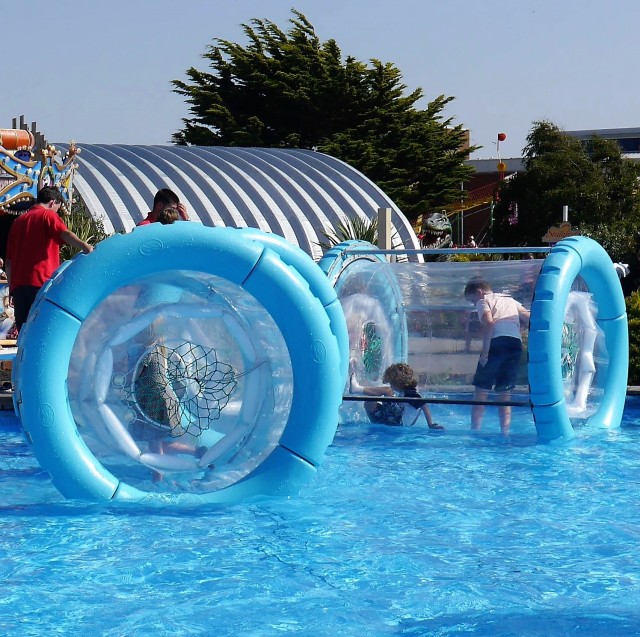 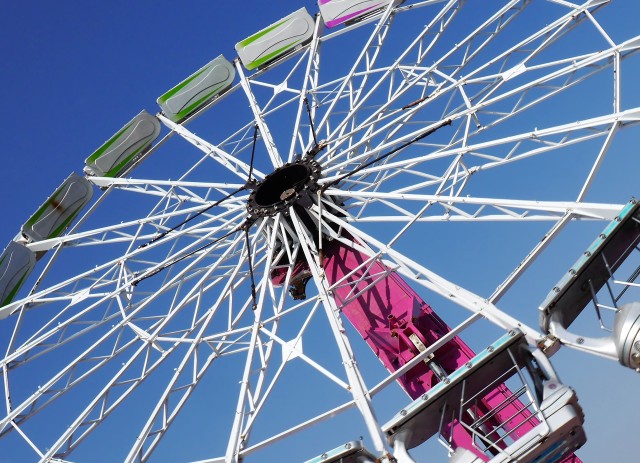 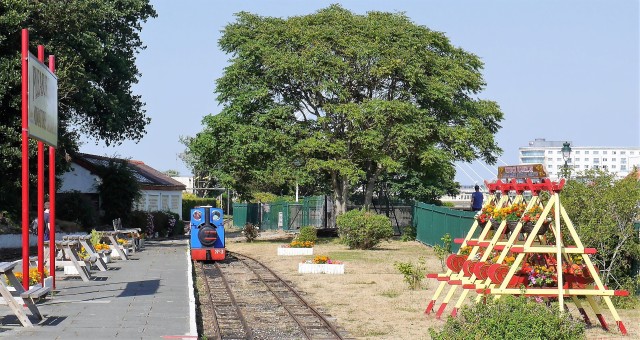 Bored teens have other things to do

12 Responses to Sun, fun and feeling the wind in your hair